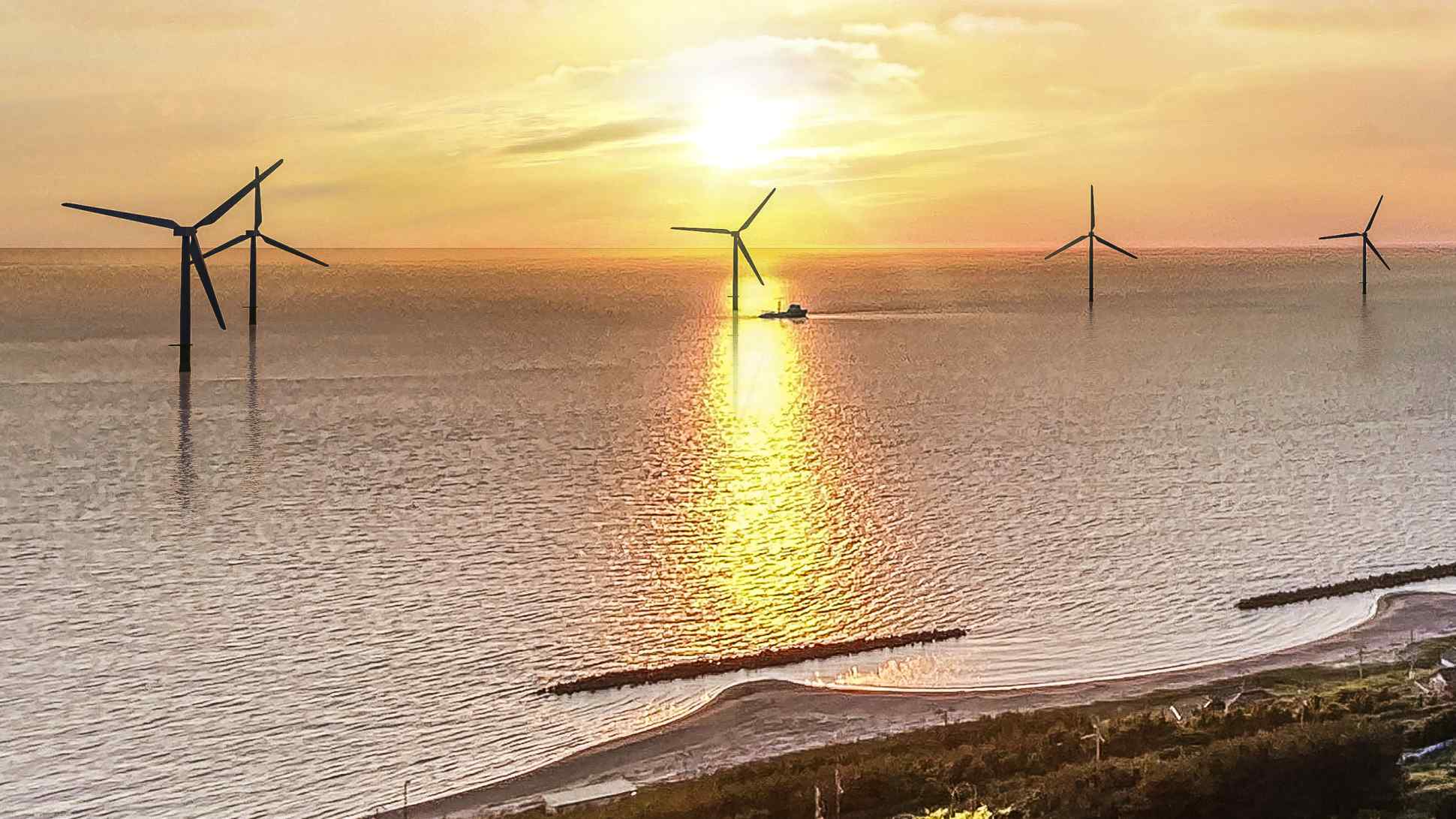 TOKYO -- When the Zaratan, a ship with an 800-ton crane on board, arrived in the northern Japanese port of Akita last month it was an occasion to savor for Japanese trading company Marubeni -- the moment when its first commercial wind farm in domestic waters began to take shape.

But for almost 10 years, "we were aiming to make the [offshore wind] business big in Japan in the future," said Hisafumi Manabe, chief executive of Marubeni Offshore Wind Development. Finally, "that is taking shape," he said.

The company is working on more projects, including two disclosed projects over 300 MW each, expected to start commercial operations after 2028.

For Marubeni and other companies, this might be the moment when conditions are right for Japan's potentially vast offshore wind market to fulfill their hopes and repay their patience.

Japan has lagged other countries in turning to offshore wind energy, reflecting infrastructure gaps, complex geography and regulatory uncertainty. But Prime Minister Yoshihide Suga's vow that Japan will achieve carbon neutrality by 2050, backed up by specific goals for the amount of energy to be generated by offshore wind, have increased companies' confidence in the case for investing. The Zaratan, a vessel, equipped with an 800-ton crane and 2,000 sq. of meter deck space, has arrived at the port of Akita to start construction of an offshore wind farm. (Courtesy of Marubeni)

Suga also recently raised Japan's greenhouse gas emission reduction target to 46% by 2030, compared versus 2013 levels, from the previous 26% target. For a small island nation, offshore-wind farms are key to increasing renewable energy use and meeting those green promises.

"If Japan cannot achieve [carbon neutrality by 2050], it will be over. It's what keeps me going," said Mitsuru Sakaki, president of Tokyo-based renewable energy developer Green Power Investment, which is developing an offshore wind farm project on the northern island of Hokkaido. Whatever hurdles there are for renewable energy, "since Japan made a [net-zero] declaration, [I believe the government] will not remove the ladder midway through," he said.

There have been false dawns for wind power in Japan before. After the Fukushima nuclear disaster in 2011, when nuclear power stations were taken offline, Japan rolled out more subsidies for renewable energy in the form of feed-in-tariffs -- a fixed price at which renewable electricity can be sold. But annual wind power installations actually fell, a development blamed on the lengthy environmental assessments required for all large projects. These often take around five years, even before accounting for construction and gaining access to the national electricity grid.

Winning the approval of local communities is also time-consuming. For Green Power's Hokkaido project, it took around seven years to communicate with residents and get the green light from the fishing industry for the company to use the site, Sakaki said. Projects also had limited long-term certainty. Not until 2019 did a new law allow wind farms to operate for up to 30 years in Japanese territorial waters in zones selected by the government. Previously, offshore wind operators needed to renew their permits every few years except in a few port areas near the coast, such as for Marubeni's Akita project.

The Suga government's targets have added certainty by suggesting the size of the available market. It wants offshore wind projects to generate 10 GW of electricity by 2030 and 30 GW to 45 GW by 2040. A gigawatt is roughly equivalent to the power produced by one nuclear reactor. Today, only about 0.06 GW is generated by offshore wind in Japan.

Even with the greater quantity of onshore turbines, wind energy accounted for less than 1% of Japan's total electricity generation in 2019. Renewable energy overall amounted to 18% of the total, while fossil fuels accounted for about 76%. The Ministry of Economy, Trade and Industry launched the first auctions last year to select offshore wind operators in Akita, Chiba and Nagasaki prefectures, and many more are anticipated.

Against this backdrop, multinational energy producers are piling in. Last year Denmark's Orsted, the world's largest offshore energy developer, and Japanese utility Tepco started a joint venture in Choshi, in Chiba Prefecture east of Tokyo. Norway's Equinor, formerly known as Statoil, opened an office in Tokyo in 2018 and entered a partnership with Jera and J-Power in 2020 to develop its first offshore project in Japan. And Germany's RWE Renewables has teamed up with Kyuden Mirai Energy, a unit of utility Kyushu Electric Power, to install turbines offshore in Akita.

Still, industry players say much remains to be done to improve the regulatory environment, including simplifying requirements for environmental assessments and approvals for construction plans. The industry and land ministries set up a committee with businesses to promoting offshore wind last year that is addressing these regulatory hurdles.

Japan also plans to expand the electricity grid to support offshore wind development, allowing power generated in remote areas to be sent where it is needed. Other hurdles for offshore wind are beyond the reach of regulators. Costs are higher in Japan compared with Europe partly because of its geography, said Kiyoshi Doi, managing executive officer at Japan Renewable Energy, a renewable energy developer backed by Goldman Sachs. Developers in Japan have to pay extra attention to the risk of earthquakes and typhoons. Winds also tend to be weaker in Japan and the archipelago is surrounded by waters more than 50 meters deep, making it difficult to anchor wind turbines to the sea floor.

Another crucial factor that raises costs is that "there is still no well-developed supporting industry" for offshore wind, Doi said. Because of the lack of ships like the Zaratan, for instance, construction vessels must be brought over from Europe.

There is also a need for turbines that are designed for Japan, according to Doi. Even with weaker wind, longer blades would be able to efficiently generate more electricity.

"At the moment, cost estimates remain high," said Doi. Because bidders must compete in auctions to win projects, "I expect profitability to be quite tough," he said.

A further cloud over profitability is that the government wants to lower feed-in tariffs, sensitive to the complaints from customers over high energy bills. The price for seafloor-mounted offshore wind was 36 yen per kilowatt-hour in fiscal 2019, but the maximum tariff was set at 29 yen for participants in auctions for waters off Akita and Chiba. Nevertheless, JRE has announced three offshore wind projects so far, and is working on about five more. Doi hopes to get a jump on competitors. More experience and know-how will enable the company to cut costs and be more competitive in bidding for projects. "Early performance and experience would build up, so that we would be able to win more," he said.

Underscoring the lack of a domestic supply chain, Japan has no major manufacturers of wind turbines. Hitachi and Mitsubishi Heavy Industries used to make them, but pulled out of the business. Nor do any foreign manufacturers have plants in Japan.

However Toshiba and General Electric are in talks to coproduce core equipment for offshore wind power systems, Nikkei reported in February. The two companies are likely cooperating on production of a piece of equipment called a nacelle, which houses turbine components including the generator, the gearbox and the brake assembly. Toshiba also hopes to expand into clean energy and become more competitive by promoting standardization of parts with GE. But the company remains coy about its plans. "There is no specific decision for now," Toshiba told Nikkei Asia.

According to Alastair Dutton, chair of the global offshore wind task force at the Global Wind Energy Council (GWEC), development of a local supply chain is a matter of time. "By having large targets and good quality regulation, the market comes to you," he said.

While companies with more domestic procurement will have an advantage in the tender process in Japan, there is no strict local content requirement, unlike in Taiwan. The Taiwan model "won't be efficient. ... We like the way that Japan is going," said Dutton. 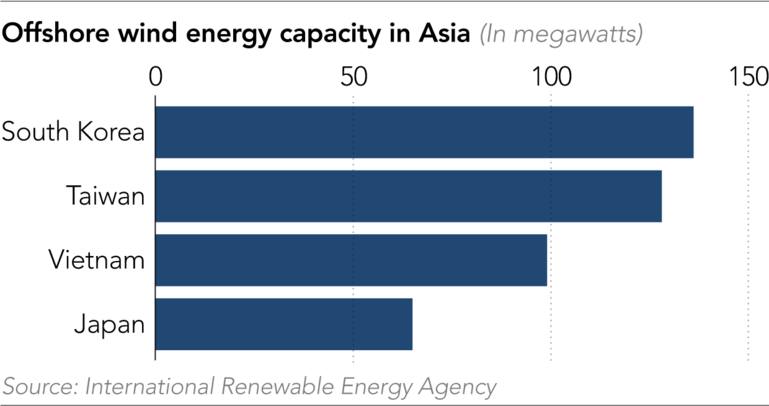 Companies are working to develop technology appropriate to Japan's unique geography. Hitachi Zosen, a Japanese engineering company, is developing base structures for offshore windmills. Technologies developed by Hitz, a former ship builder, include a "suction bucket" foundation for wind turbines that is better suited to Japan's rocky seafloor.

The company is approaching construction companies and other wind farm developers as potential customers, said Takashi Fujita, general manager of Hitz's wind power business unit. It is also working on its own project in Aomori as a test bed for its services.

Hitz is also among the companies working on floating offshore wind farms, which could resolve the problem of Japan's deep seas. Fujita believes floating turbines will be needed for Japan to meet the 2030 offshore wind power target. Floating wind farms are still rare and there are technological and cost hurdles. However Fujita believes Hitz's relatively stable semisubmersible foundations can be commercially viable by 2023, given existing feed-in tariffs. The cost of engineering, procurement and construction, including turbines, will be about 600,000 yen per KW, roughly the cost of today's seafloor- mounted offshore farms, according to Fujita. 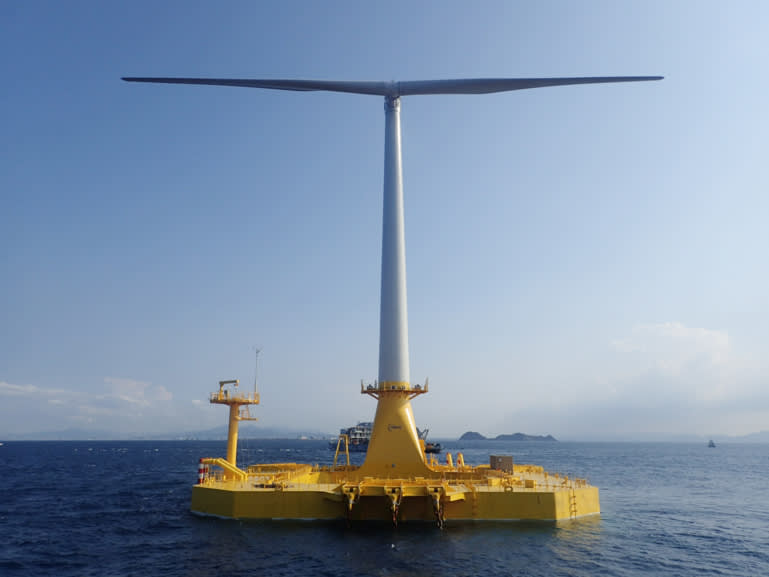 Marubeni is also eyeing floating wind farms and is working on a test project in Kitakyushu in southern Japan with Hitz. It is taking part in bidding for a project in Scotland that is expected to begin operating after 2030.

"The future will surely be floating wind," said Manabe. By getting involved in one of the world's first commercial floating projects, "we want to win the orders, gain experience and expand that to Japan and [rest of] Asia, like we did for bottom-mounted offshore wind," he said.

That speaks to a broader point: Although Japan may not have had first-mover advantage in offshore wind, companies investing in the country can still turn the situation to their advantage.

"Japan is joining the [offshore wind] industry at a time when a lot of the issues have been resolved. Now we just need to adapt it to the Japanese way of working," said the GWEC's Dutton. "Whoever gets there first and puts the investment in place will then service the region ... issues that are resolved in Japan will also help other countries around the world who have similar conditions."