The Suntory Yamazaki Distillery in western Japan has become a magnet for the world's whisky aficionados. (Photo by Tomoki Mera)
Business Spotlight

TOKYO/OSAKA -- The town of Shimamoto, near Kyoto, is known as the site of a bloody 16th-century samurai battle and as a source of pure water for traditional tea ceremony. These days, however, travelers come for the tipple.

The Suntory Yamazaki Distillery has become a pilgrimage destination for the world's whisky connoisseurs. Around 9,300 foreign visitors walked its hallowed halls in 2019, up from just 800 a decade earlier.

"While Scottish or American whiskies are too strong and hot, and [leave me] feeling woozy, Japanese whisky is softer, and I can relax," said Eugine Carlo Ang, a 25-year-old collector visiting from the Philippines. "It's a good fit for Asians."

Ang is just the sort of young overseas customer Suntory Holdings hopes to attract. For despite a boom in Japanese whisky consumption -- certain bottles have become virtually impossible to buy due to short supplies -- the beer brewer and spirits maker feels a sense of crisis about its shrinking home market.

Suntory's two main rivals, Kirin Holdings and Asahi Group Holdings, share its worries as overall Japanese alcohol consumption drops and the population declines. All three are racing to expand further overseas, in their own ways, though the new coronavirus looms over the beverage industry as it does so many others. Suntory's whisky has become so popular that much of it is in short supply, but the company fears for the future of the Japanese alcohol market. (Photo by Tomoki Mera)

Suntory has been selling its whiskies internationally since 1962. But it was only in the past couple of decades that they became some of the most sought-after. A cameo in the 2003 film "Lost in Translation" -- "For relaxing times, make it Suntory time," Bill Murray purrs -- may have helped. Winning the Whisky Bible's "world's best" title for the Yamazaki Single Malt Sherry Cask 2013 certainly did.

"When I drink Yamazaki, I feel like I'm living in luxury," said Ang, who owns 15 bottles of the brand.

Rare whiskies go for eye-watering prices. A single bottle of 50-year-old Yamazaki was auctioned off for over $300,000 in 2018. In January, Suntory announced a lottery for 100 bottles of Yamazaki 55, priced at a little over $27,000 a pop. Even the standard Yamazaki 12 Year Old has roughly doubled in price compared to a few years ago, if you can find it at all.

Japan's distillers, and their fans, are paying the price for a slump in whisky consumption years ago. Since demand was down, makers did not start aging enough liquor to fully capitalize on the current boom. Now they are scrambling to produce as much as they can. Domestic shipments of whisky, excluding imports, have increased every year since 2012, according to the National Tax Agency.

Yet Suntory fears Japan's surging whisky demand -- also fueled by the popularity of high balls, or whisky and soda -- is only temporary.

"In the medium to long term, the decline of alcohol consumption [in Japan] is expected to accelerate a bit," said Nobuhiro Torii, Suntory's executive vice president, in early January. The great-grandson of founder Shinjiro Torii said he has an even bigger worry than the country's aging population: "I think young people's alcohol avoidance is the more serious issue."

Indeed, Japanese are drinking less than ever. Total consumption of alcoholic beverages fell to 8.7 billion liters in 2018, down about 3% from 2009, according to Euromonitor International. Several factors are believed to be at play. One is rising health consciousness. At the same time, changes in the workplace -- from more telecommuting to less obligatory socializing with bosses -- mean fewer opportunities to hit the pub.

All this is on top of Japan's problematic demographics. "It is urgent for liquor producers to expand in overseas markets," said Tomomi Fujikawa, an analyst at Euromonitor International.

While Japanese are imbibing less alcohol, the rest of the world is downing more. Global consumption climbed to 254.3 billion liters in 2018, up 7.6% from 2009.

In good news for whisky-focused Suntory, two of the world's most populous countries have developed a taste for the drink. Over the same 2009 to 2018 period, alcohol consumption in India soared 75.2%, while in China it rose 11.5%. India is now the world's largest whisky market, accounting for half of global demand.

In December, Suntory introduced a line exclusively for India called Oaksmith -- a blend of Scotch and bourbon that sells for around $20 a bottle.

Acquisitions are also part of the global strategies of Suntory, Asahi and Kirin alike.

In 2014, several years after merger talks with Kirin fell through, Suntory bought major U.S. distiller Beam for $16 billion. The Japanese company is now the world's No. 3 spirits maker, behind Britain's Diageo and France's Pernod Ricard. It is also the only distiller with brands from all five of the world's main whisky regions: Scotland, Ireland, Japan, the U.S. and Canada. 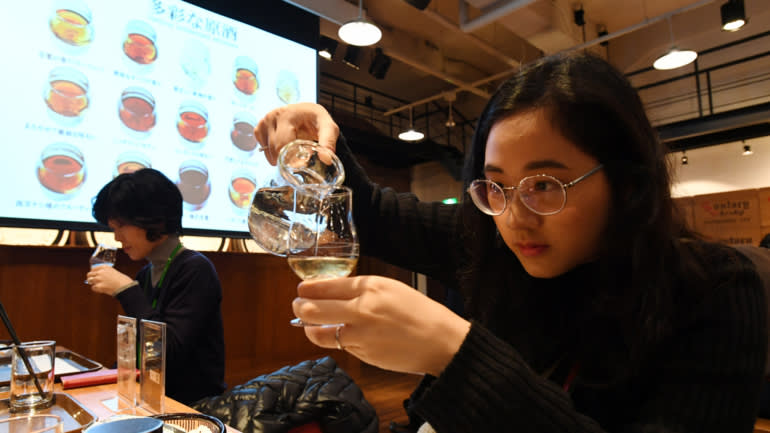 A visitor from Hong Kong pours water into a glass of whisky during a tasting at the Suntory Yamazaki Distillery. (Photo by Tomoki Mera)

In late January, Suntory added to its empire by acquiring 10% of the owner of The Macallan, a Scotch brand Suntory has long distributed in Japan.

In the 10 years to 2018, Suntory's overseas sales ratio doubled to 42%. But it still hopes to increase the figure and nearly double global sales to 4 trillion yen ($36.23 billion) over the medium to long term.

The coronavirus, of course, could upend companies' best-laid plans as the outbreak hits consumer demand in Japan, across Asia and potentially further afield.

Suntory President Takeshi Niinami warned that the impact "would be considerable" at an earnings briefing on Feb. 14. "People refrain from going out for drinking at bars and restaurants especially in China and Southeast Asia."

He also expressed concern about Suntory's supply chain. "We buy some [materials] from China. We are able to take care of it for now, but if transport is delayed or the virus spreads further, there is a possibility of halting production."

The virus aside, while Suntory is betting mainly on spirits, Asahi is counting on beer.

Founded in 1889, Asahi controls about 40% of the Japanese beer market. But that market shrank for the 15th straight year in 2019.

In 1989, two years after Asahi released its Super Dry beer, it sold 100 million cases. It sold at least that many every subsequent year until sales fell short in 2017. Now, as its main Japanese customers age into their 40s and older, management is struggling to rejuvenate the brand.

"We've been bad at appealing to young people," Asahi Breweries President Kenichi Shiozawa told reporters in January. He conceded that the company faces a "tough challenge" in the domestic market due to consumer "thriftiness" and even "unstable weather."

Asahi's answer has been to binge on acquisitions abroad. 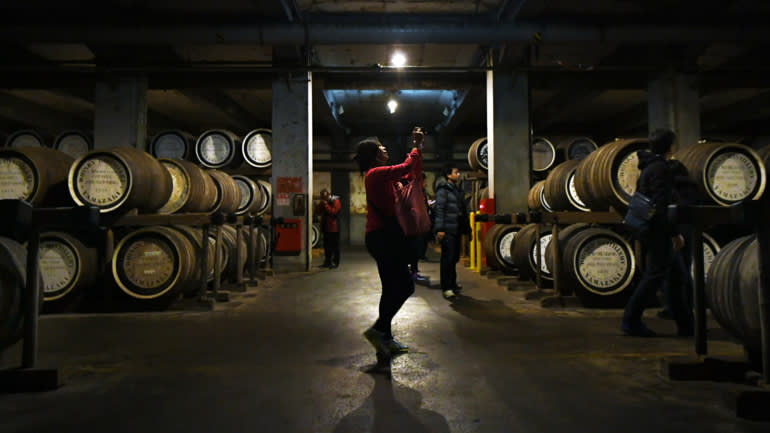 A warehouse at the Suntory Yamazaki Distillery: Around 9,300 foreign visitors participated in tour came in 2019, up from just 800 a decade earlier. (Photo by Tomoki Mera)

In 2016 and 2017, the company spent over $10 billion to buy former SABMiller breweries across Europe from Anheuser-Busch InBev, including the Czech Republic's Pilsner Urquell and Italy's Peroni.

In 2019, Asahi struck its biggest deal yet, purchasing Australia's Carlton & United Breweries from InBev for 1.2 trillion yen, or about $11 billion.

Asahi has higher hopes for beer-loving Europe and Oceania than emerging Asian countries where many consumers prefer sweet nonalcoholic beverages. Australia is also a rare developed economy with a growing population, thanks to immigration.

Kirin, meanwhile, has had a better run in Japan lately, nearly catching Asahi as the top brewer. The company scored a hit with its Hon Kirin no-malt beer alternative released in 2018. But that has not eased its pessimism about the domestic youth market. "In our time, I was looking forward to becoming a 20-year-old because it meant I could smoke and drink alcohol," Kirin Holdings President Yoshinori Isozaki recalled in an interview with Nikkei. "Those things symbolized adulthood."

In the next few years, however, a very different generation will emerge as a consumer force: "People of the same generation with Greta," Isozaki said, referring to Swedish teenage climate activist Greta Thunberg.

"I don't think [she] wants to smoke or drink," he said, echoing Suntory's Torii. On top of changing youth perceptions, World Health Organization warnings about alcohol have heaped pressure on beverage makers. "This is why I decided to do business that connects medicine and food," Isozaki said.

Last year, Kirin announced it would buy 30.3% of Japanese cosmetics and health food maker Fancl. The goal is to nurture another core source of revenue, complementing the beverage and pharmaceutical businesses.

Fancl and Kirin's first joint product, introduced at the end of January, is a kale gin and tonic made with the former's kale puree and sold at the latter's beer halls. A bartender at one of Kirin's beer halls in Tokyo makes a cocktail with kale -- a collaborative product with Fancl. (Photo by Ken Kobayashi)

Isozaki thinks the health strategy will work anywhere. The rest of "Asia has the same challenge" as Japan of keeping their people healthy, he said. Last year, on its own, his company introduced a health drink in Vietnam called Kirin iMUSE. The president said Kirin is "in talks" with San Miguel in the Philippines -- in which it owns a 48% stake -- to bring the drink there as well.

This does not mean Kirin is abandoning beer.

It is focusing on alcohol in Australia, its second-largest market after Japan, and has invested in a pair of Myanmar breweries. Craft beer is another priority: Kirin formed a capital alliance with Japan's largest craft brewer, YO-HO Brewing, in 2014. And late last year it agreed to purchase New Belgium Brewing, one of the largest craft players in the U.S.

"Consumers have changed," Isozaki said. "I feel a change from an era of mass consumption to personalization."

But Kirin is haunted by bitter overseas experiences -- it sold Brazilian arm Brasil Kirin, formerly Schincariol, to Heineken in 2017 for about 77 billion yen just six years after acquiring it for around 303.8 billion yen. Not everyone is convinced by its health kick, either.

"Kirin's plan seems vague," said Satoshi Fujiwara, a research analyst at Nomura Securities. "It intends to survive with the health business as it finds the risk to the beer business considerable. But it is hard to see their seriousness toward the health sector, as they've only purchased 30% of Fancl."

Fujiwara expressed more confidence in Asahi, saying it "has a clear and understandable strategy that tries to capitalize with high-value-added beers in Europe and Australia."

The one thing everyone seems to agree on is that the future of Japan's big three brewers lies on foreign shores.