The mixed collection of Boeing 747-400s, Airbus A330s, Boeing 787-9s and Airbus A380s sitting silently on the tarmac or inside hangars at Suvarnabhumi Airport might appeal to aviation enthusiasts and photographers looking for a rare and dramatic shot. But the inertness of the fleet highlights not just the impact of COVID-19 but the airline's decades of financial inefficiency.

"Thai Airways troubles started in the 1990s when it decided to diversify and buy every type of plane that was being manufactured," said an airline industry insider in Thailand. Different models have different specs using different engines, the person told the Nikkei Asian Review, forcing the airline to train an army of engineers to keep the General Electric and Rolls-Royce engines flightworthy, inflating maintenance costs.

The inefficiency manifest at Suvarnabhumi is just one part of a history of mismanagement, corruption, and political interference that has now plunged the airline into overhaul proceedings. The kingdom's Bankruptcy Court on Wednesday accepted a petition from Thai, as the airline is commonly known, for rehabilitation under the court's supervision, with the first hearing scheduled for August.

A source in the Prime Minister's Office said that the coronavirus is what exposed Thai's underlying corporate culture and financial weaknesses. But for aviation analysts, the airline becoming the first national flag carrier in the world to go through legal rehabilitation was no surprise. The pandemic was simply the last straw that ultimately broke its wings.

CreditRiskMonitor, a New York-based credit research company, on March 11 named Thai along with Virgin Australia Holdings, Sweden-based SAS and Malaysia's AirAsia X as airlines with a risk of bankruptcy 10 to 50 times greater than the average public company. Of those, Virgin Australia entered voluntary administration -- equivalent to Chapter 11 bankruptcy in the U.S. -- ahead of Thai.

Ahead of the filing, the Ministry of Finance on May 22 trimmed its shareholding to 47.86 from 51.03%, selling 3.17% to state-run Vayupak Fund 1. Thai's second vice chairman and acting president Chakkrit Parapuntakul admitted that the airline had ceased to be a state enterprise under relevant laws, which have long hindered a thorough restructuring. The slow collapse occurred in layers. Management was inconsistent as presidents and board members frequently came and went for political reasons. And employees were not blameless, taking advantage of executive mismanagement to feather their own nests.

It wasn't that the need for reform went unrecognized, just that efforts by past presidents, when they came, were inevitably cut short. Piyasvasti Amranand took the helm in October 2009 after serving as energy minister. Within Thai, he is still spoken of as the only true reformer, launching cost-cutting measures such as salary cuts for senior executives.

Despite helping the airline fill its deficit in 2009, directors suddenly voted him out in June 2012 in what was seen as a politically motivated ballot. His spouse was a senior member of the Democrat Party and the kingdom was under the premiership of Yingluck Shinawatra from then-rival-Pheu Thai Party controlled by her brother, the exiled former Prime Minister Thaksin Shinawatra.

Piyasvasti expressed exasperation at receiving no explanation for the apparent boardroom coup. "The performance of the company during my term has improved in every aspect," he said at the time.

Charamporn Jotikasthira, former president and chief executive officer of the Stock Exchange of Thailand, took the helm in 2014. But Charamporn's reforms faced a major revolt from the airline's union and made little progress. He ended up retiring in February 2017. Sumeth Damrongchaitham took over the position in September 2018, but resigned March this year in the middle of his tenure.

Unprofessional boards also did not help. After a military coup in 2014, a trend emerged when Air Chief Marshal Prajin Juntong, who later became a deputy prime minister in the junta, was appointed chairman. Five civilian members were purged and replaced with five Royal Thai Air Force officers.

The appointments marked an end to the management culture of only appointing technocrats to board management positions that Thaksin had introduced around 2001 and Yingluck abided by. Three air chief marshals are currently on the board and have no experience in running listed companies or restructuring loss-making airlines.

Unions are guardians of workers' rights, but employees at Thai are seen as overprotected. Salary increases are based on length of employment. "At times, senior captains were getting paid more than the president of the company," a former board member told Nikkei Asian Review.

At one time, the airline had 300 engineers reporting 8 hours overtime for all 365 days of the year, "which does not make sense," the former board member said. And, he added, when changes were introduced to reduce such compensation anomalies, staff were able to get around them through special allowances. 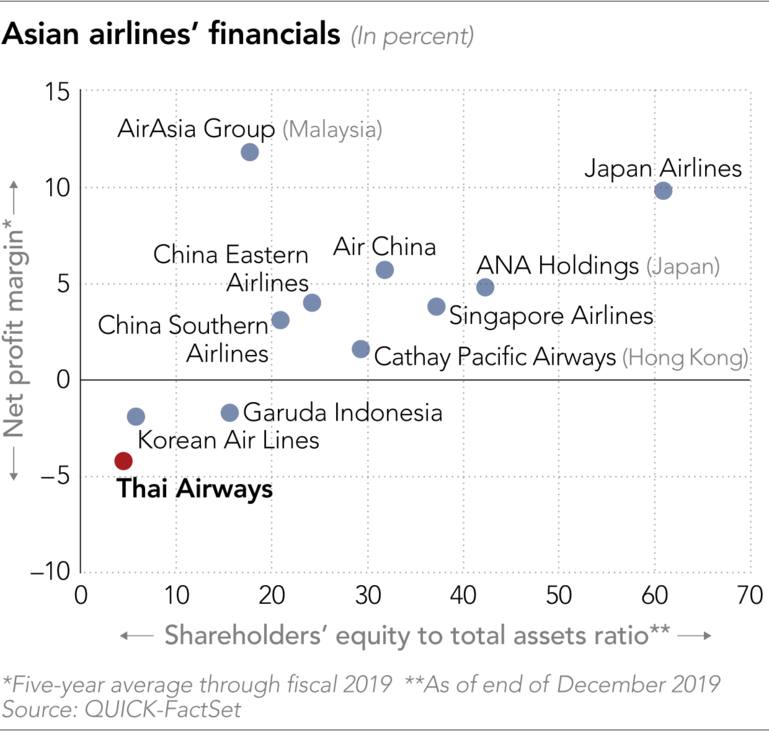 Thus, inconsistent management and overpaid, unmotivated workers spoiled the flag carrier's profitability. Thai reported a net loss of 12 billion baht ($376 million) in 2019, the third straight annual loss. Total shareholder equity was at 11 billion baht as of December 31, down 85.8% from the end of 2010, the last time it raised capital.

The coronavirus impact was so massive that the carrier could not report its quarterly financial results ending March on time. The Stock Exchange of Thailand granted a special extension until Aug. 14. But reports already say the net loss for the current fiscal year may balloon to as big as 60 billion baht, five times larger than last year.

The virus clearly shattered any business reboot hopes that Thai had. Its plan to open an aircraft maintenance yard in eastern Thailand fell into jeopardy after its partner Airbus missed a deadline to submit a contract proposal. The two had agreed in 2017 to build a maintenance, repair, and overhaul facility -- a plan that may justify its long experience in maintaining a wide range of planes -- at U-Tapao International Airport in Rayong Province. But pandemic-induced uncertainty in the aviation industry prompted Airbus to back out from the 11-billion-baht project, said a senior official at Thai.

Under rehabilitation unqualified board members will automatically be replaced. That leaves cushy employee perks as the last hurdle to overcome for a thorough restructuring and is where the 3% share sale will have a big effect. 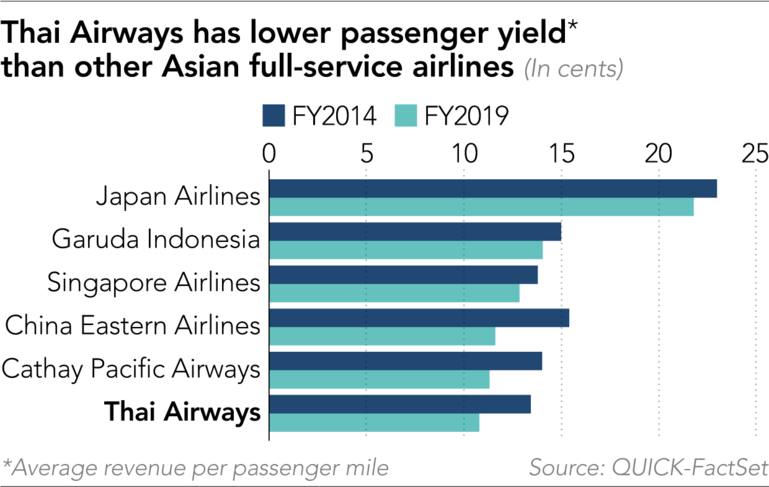 Stripping Thai of its state enterprise status will terminate worker privileges, including the right to form a union, which was allowed under related state enterprise acts. Charamporn, when working on his reforms, complained of the limitations Thai faced as a state enterprise. "You cannot easily fire people," he said in an interview with Nikkei at the time.

Naturally, the union's reaction to rehabilitation is fierce. "Thai Airways is the national carrier and it shall remain only [that]," said Nares Puengyam, union president. The union said that creditors lent money based on Thai's status as a state enterprise, and the 3% divestment at a time of restructuring would make them lose faith.

But the 3% share sale to the state-run fund was a carefully calculated act. A majority of shares are still under the strong influence of the government, even as the state enterprise status was successfully stripped away.

Nares took a hard stance, vowing the union will "oppose to the end" the process. But when confronted with the government's decisiveness in completely overhauling the carrier, the union relented, saying it will not stand in the way.

"The Bankruptcy Court will appoint professionals to supervise its rehabilitation and restructuring in a professional way," said Prime Minister Prayuth Chan-ocha, who chaired the State Enterprise Policy Committee in deciding to send the airline to court-supervised rehabilitation.

Thai on Monday said that it has replaced four board members. Among the new ones is none other than Piyasvasti, the former president whose reform efforts were once blocked. Pailin Chuchottaworn, former deputy transport minister until December 2019, resigned the day after he was appointed, as Thailand's anti-corruption authority bans a cabinet minister from sitting on the board of a private company for two years after leaving the office.

Thai proposed on Wednesday that the current chairman, acting president and three new board members, along with consultant EY Corporate Advisory Services, be appointed as rehabilitation planners.

Earlier, a number of names had come up, including former president Charamporn as well as state enterprise executives such as Tevin Wongwanich, president and chief executive of state-owned resources producer PTT Exploration and Production, and Chartchai Payuhanaveechai, president of Government Savings Bank.

Nikkei Asian Review has learned that an invitation to join the planning team will also be sent to Chumpol NaLamlieng, currently an independent director of industrial conglomerate Siam Cement. After serving as the president of Siam Cement from 1993 to 2005, Chumpol joined British Airways as a director until 2009. These names still may contribute to Thai's rehabilitation. Idle Thai Airways jets are parked on the tarmac at Bangkok's Suvarnabhumi Airport. The company became the first national flag carrier in the world to face court-sponsored bankruptcy rehabilitation amid the coronavirus pandemic. (Photo by Akira Kodaka)

The planners' overhaul proposal must be endorsed by a majority of creditors for it to be put into action by the executors. "The rehabilitation process can potentially be protracted and acrimonious," said Joseph Tisuthiwongse, a partner at Bangkok-based law company Chandler MHM. Layers of legal steps and the varied interests of concerned parties make it "unclear how Thai will emerge from the process," he added.

But the national flag carrier must emerge clean from rehabilitation to remain a trusted brand for Thais. Such a wrenching overhaul is not uncommon in the aviation industry, especially after a major economic or security shock. Japan Airlines filed for rehabilitation in 2010 and after scrapping over 60 money-losing routes and laying off one-third of its workforce, it returned to profitability.

Since 2000, United Airlines, Delta Air Lines, Northwest Airlines, US Airways, and American Airlines have all been overhauled after filing Chapter 11 bankruptcies. U.S. banks and investors were forced to pay the price through debt write-offs, while the airlines experienced massive restructuring. Thai's struggle may be signaling another global trend of aviation overhauls induced by the coronavirus pandemic.

Downsizing fleets and scrapping unprofitable routes should be on the Thai rehabilitation agenda. Reports said the plan will ask as much as 50% of its more than 20,000 employees to leave with a 10 months of salary as severance.

The plan is expected to involve requests for debt forgiveness to creditors. Local credit rating agency Tris Rating has downgraded Thai's company rating and its senior unsecured debentures to default on Wednesday. Investors -- including the Ministry of Finance -- will likely be required pay their share of the cost to ensure fairness through capital reduction or equity dilution.

"If Thai really reforms, the gravy train for many is over," said the source from the Prime Minister's Office.