TOKYO/SHANGHAI -- When the coronavirus pandemic hit Japan, the country's first line of defense depended on an unremarkable town best known for processing sardines.

Workers at Unicharm's factory in Kan-onji, on the country's picturesque Seto Inland Sea, knew business was about to get extremely busy as Japanese donned face masks as a barrier against COVID-19 transmission.

The Japanese consumer goods group, better known for diapers and feminine hygiene products, has been producing masks since 1995. Once SARS-CoV-2 found its way into Japan, Unicharm deployed more workers in mask production in Kan-onji and began operating the plant 24 hours a day. The company now churns out more than 120 million masks per month, around three times more than it used to.

The decision to ramp up production came in reaction to the pandemic, but it has also given Unicharm the legs it needs to expand its international operations, especially throughout Asia.

"We will use our [mask-making] experience in Japan," to expand the market in Asia, CEO Takahisa Takahara told Nikkei Asia. For now, he said, the company intends to tap consumer demand for a defense against the virus, but long-term Unicharm masks will be marketed to help Asians deal with the pockets of thick air pollution that plague major metropolises like Jakarta, Singapore, Bangkok and New Delhi. 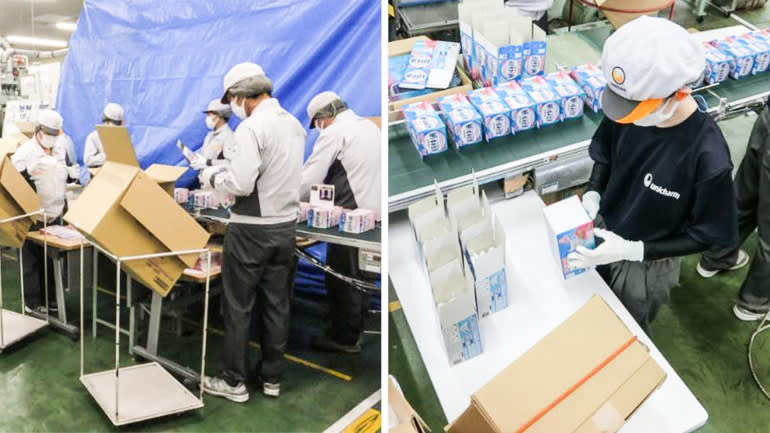 Unicharm responded to Japan's coronavirus outbreak by shifting to 24-hour-a-day production of face masks at its plant in Kan-onji, Kagawa Prefecture. (Photo courtesy of Unicharm)

Regardless of when the pandemic peters out, Takahara said, demand for high-quality masks will remain strong.

Unicharm hopes to stand as an example of how a strategy based on exports and a "made in Japan" premium brand can overcome the challenges of the country's stagnant economy and declining population -- even for a product as humble as the mask, where rivals have crowded into the market.

Unicharm plans to begin with shipments to India, Indonesia, Malaysia and Thailand early next year. It would be a first foray into large-scale mask exports, though it has held trial sales in China, Taiwan and Vietnam. It intends to export about 20 million masks a month, but that number could change depending on demand in Japan, its priority.

Near universal mask-wearing in Japan's big cities has spared the country the kind of crises now gripping the U.S. and other Western nations -- although coronavirus transmissions in Japan have begun accelerating. Medical experts and public officials are calling it a third wave of the COVID-19 outbreak. 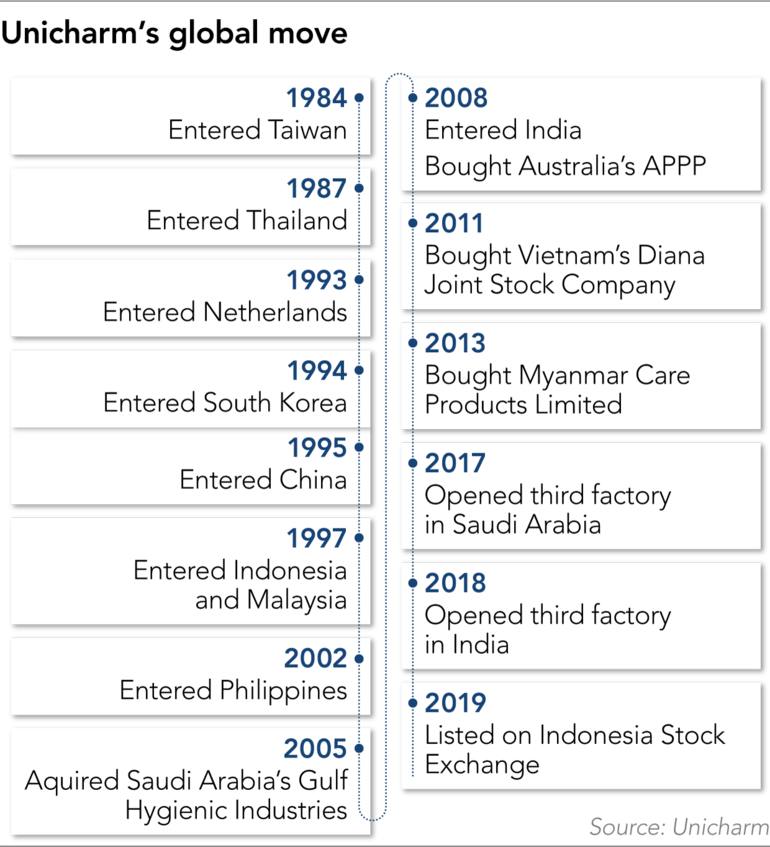 It entered its first foreign sanitary goods market in 1984, when it began worrying about its home country's population trajectory. The once domestic demand-reliant company is now considered by Japan Inc. as an international expansion success story.

Japan's vitals will not change, Takahara said, expressing concern over the country's aging population. "The declining birthrate," the son of Unicharm founder Keiichiro Takahara said, "is progressing faster than expected."

Unicharm has focused its international expansion on Asia, where baby diaper consumption climbed to $17 billion in 2019, up 4.1% from the previous year, according to Euromonitor. By 2024, Asia's baby diaper market is expected to hit $22.5 billion.

So, how will Unicharm become a bigger player in the rest of Asia? It gave a partial answer to that question in December, when it listed on the Indonesia Stock Exchange, a move designed to help it expand in Southeast Asia's largest economy.

Indonesia highlights one of Unicharm's biggest challenges, one posed by better-known American giants Procter & Gamble and Kimberly-Clark, the world's No. 1 and 2 diaper makers. Unicharm listed on the Indonesia Stock Exchange in a bid to expand its already strong presence in Southeast Asia's largest economy. (Photo courtesy of Unicharm)

In September, Kimberly-Clark announced it would acquire Softex Indonesia, one of the country's largest players, for $1.2 billion to improve its Southeast Asian presence. Softex accounted for 29% of Indonesia's retail hygiene market in 2019, when Unicharm's share dropped to 44%.

He added that Unicharm has struggled to expand into regions beyond Asia, where it is currently the No. 1 player. Both Procter & Gamble and Kimberly Clark are truly global, having established solid footprints in all regions.

The Japanese company operates in more than 80 countries, and investors appear to be convinced that more international growth is on the way. Since 2016, Unicharm's market capitalization has doubled, and on Nov. 12 the company's shares reached 5,316 yen, a record high, partly due to COVID-19 and an aggressive mask strategy. In 2019, Unicharm shares never went higher than 3,787 yen, which they hit on Dec. 30. 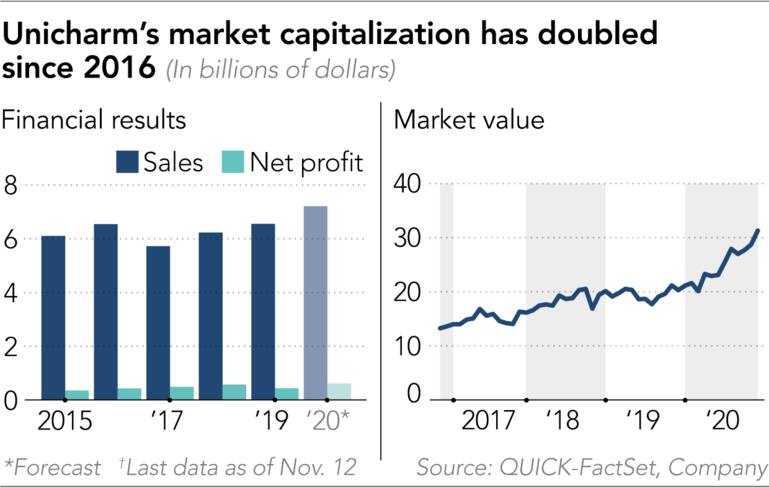 For fiscal 2019, Unicharm's net income dropped 25%, partly due to sluggish diaper sales in China. This fiscal year, the company expects its net income to gain 36.6%.

The company is pushing premium diapers as it goes for higher profit margins over gaining market share. Ironically, the coronavirus, which has been powering mask sales, has cooled this strategy as it saps consumer confidence in Japan and across Asia.

Amid the pandemic and ensuing economic uncertainty, "pitches for premium products may not work well," Takahara said, "though [demand for these more expensive options] has not been completely eliminated."

The CEO added that consumers who do move up to premium products and find them convenient have a hard time going back to the cheaper item, "even if their income decreases."

There is another irony when it comes to Unicharm and premium products, one that it discovered after entering China in 1995. At first, Unicharm tried to appeal to Chinese by making lower-priced diapers in China. 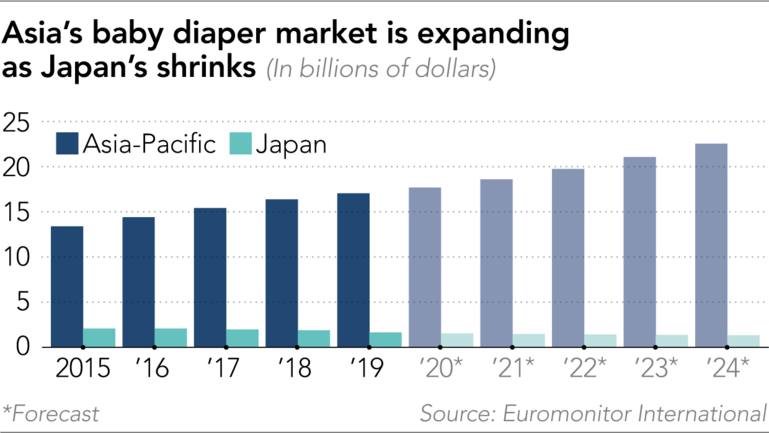 But Unicharm had misread Chinese consumers, and the strategy backfired.

At the time, masses of Chinese city dwellers were ascending into the middle class. As they did, they carried a disdain for local products and an affinity for quality, made-in-Japan goods.

Still, Takahara harbors some caution when it comes to banking on Japan's manufacturing reputation. Consumer "values are diversifying" not only in Japan but also in Asia, he explained, saying Unicharm has to do more than simply spread made-in-Japan products and export trends from Japan.

China is also dealing with a declining population, though the problem is not as acute as it is in Japan. Mainland China in 2019 recorded its fewest number of births in 58 years, government data released earlier this year shows.

Despite its declining populations, Asia remains important to baby diaper makers as it accounted for 37% of global demand in 2019, a figure that is expected to climb to 42% by 2024, according to Euromonitor International.

The company last year opened a factory in Fukuoka, on the southwestern main Japanese island of Kyushu. It was originally meant to make baby diapers for export to China but has just begun producing adult diapers.

As for pet care products, the pandemic is making a lot of people anxious, which is leading to a rise in pet ownership as consumers seek the soothing comradeship pets can offer. 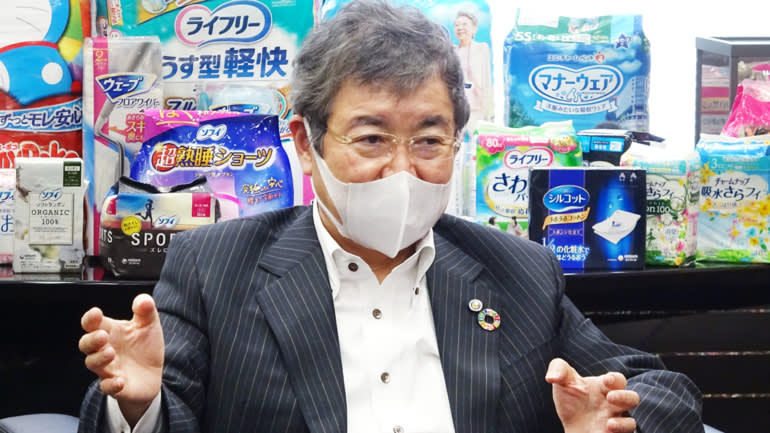 The world will be living with the coronavirus for several more years, Unicharm CEO Takahisa Takahara says. (Photo by Nana Shibata)

But the big product for which the pandemic is creating great need is the disposable mask. Old-line producers and their new rivals -- the seemingly unquenchable demand from earlier this year enticed a range of businesses into mask-making -- now compete for slices of a market that is expected to grow by $118.60 million from 2020 to 2024, according to market research company Technavio.

The global face mask market was worth $1.52 billion in 2019, and it is predicted to be at $2.45 billion by 2027, according to Research and Markets. Another researcher, Grand View Research, says the market size exceeded $74.9 billion in the first quarter of 2020, when demand far outstripped supplies.

One heavyweight rival for Unicharm is BYD, the Shenzhen-based conglomerate that provides the world's smartphone makers with batteries, builds its own electric cars, solar panels and buses, and since early this year has been one of the globe's largest makers of face masks.

In January, as the coronavirus outbreak began to spread rapidly in China's Hubei Province, delivering a particularly deadly blow to the capital Wuhan, BYD converted a factory so it could make masks from scratch.

BYD had 200,000 workers at the time, and when the factories they all worked in resumed operating, the conglomerate itself would need half a million masks every day. 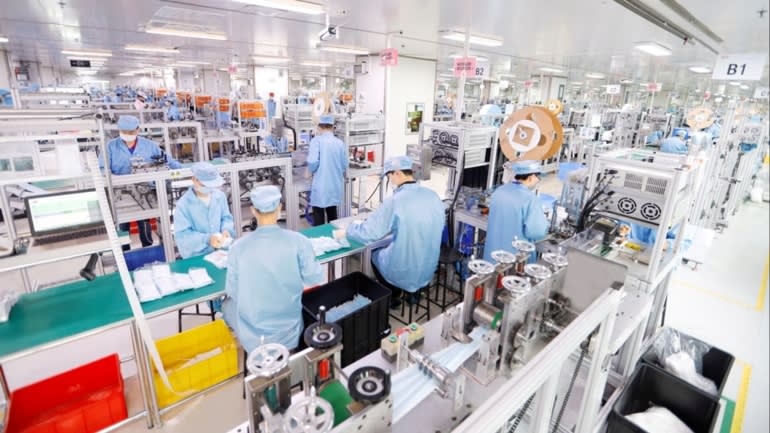 Once BYD realized it would be needing 500,000 masks every day for its own employees, it got to work converting smartphone assembly facilities into mask factories. (Photo courtesy of BYD)

The dust-free rooms in which BYD assembled smartphones were compatible with mask-making. The key material, melt-blown fabric, was also readily available as China is the world's largest producer.

By mid-February, BYD was churning out premium three-layer masks, and by May it had the capacity to produce 50 million pieces a day, up from 5 million in March.

The number looks even larger when compared to what all of China was producing at the end of February -- 116 million pieces a day, according to official data. The output initially served domestic demand, but soon enough China was shipping the products to 50 countries, including Japan, Russia and New Zealand.

Despite China's staggering ability to spin out endless numbers of masks, Takahara is confident Unicharm's masks can attract Asian consumers. In fact, he said, "demand is stronger than I expected. Japanese Unicharm masks have a scarcity value in Asia."