Although unpredictable, China has been a major factor in decision-making for American film studios. (Source photos by AP, Reuters and Getty Images)
Business Spotlight

NEW YORK -- Chinese moviegoers have not seen any Marvel film since "Spider-Man: Far From Home" in 2019.

The highly anticipated "Black Widow" and "Shang-Chi and the Legend of the Ten Rings" have not secured release dates in mainland China even though they have already made splashes overseas and "Shang-Chi" was made with China in mind. The upcoming "Eternals" has not received a slot either.

Instead, Chinese moviegoers flocked over this week's National Day holiday to see homegrown fare, including "The Battle at Lake Changjin," an epic about the Chinese army in the Korean War.

Hollywood has spent years cultivating Chinese audiences, but with censorship tightening and regulation unpredictable, studios are finding it increasingly difficult to get their biggest blockbusters in to the market -- and starting to rethink their strategy.

In 2020, China's box office surpassed America's as the largest in the world, partially thanks to its earlier reopening from the pandemic. Ticket sales totaled $3.1 billion, compared to $2.1 billion in the U.S., according to Maoyan Entertainment, a Chinese ticket service and film data platform. Although unpredictable, China has been a major factor in decision-making for American studios. Film productions sometimes tweak scenes to get access to China. A trailer for the sequel to the 1986 blockbuster "Top Gun" suggested that Japanese and Taiwanese flags on the leather jacket of the main character, Maverick, had been removed to avoid touching a nerve with Chinese regulators. In June, "Fast & Furious 9"' star John Cena apologized to Chinese fans for referring to Taiwan as a "country" in a promotional video for the movie. "Fast & Furious 9" made nearly $204 million in China and $173 million in the U.S.

Studios and stars often find themselves drawn into controversy on Chinese social media. With a nearly all-Asian cast, "Shang-Chi" was well reviewed, widely appreciated and lucrative: Its U.S. box office had topped $200 million and it had brought in $388 million worldwide as of Oct. 5, according to Box Office Mojo. But as it was being promoted overseas, China's netizens criticized the stars, Simu Liu and Awkwafina, for failing to conform to traditional Chinese beauty standards, and also the villain, the Mandarin, for being a stereotype. Some reviewers in the U.S. had similar criticisms of the Mandarin -- a heavily reworked version of the Marvel comic strips' Fu Manchu -- but Chinese actor Tony Leung received particularly heavy criticism on Chinese social media for the role before the film was released. A trailer for "Top Gun: Maverick" shows ambiguous patches under the U.S. and U.N. flags where the jacket in the original film had the flags of Japan and Taiwan. (Screenshot from Paramount Pictures' YouTube page)

Some suspect the upcoming "Eternals" faces difficulty securing a release date because its director, Oscar-winning China native Chloe Zhao, was criticized for making an unflattering comment about her homeland during an interview several years ago. The announcement of her Oscar victory was blocked on the Chinese internet as well. It remains unclear if Chinese moviegoers will be able to watch "Eternals" this year.

"If I was an investor, I would be very concerned about a strategy at this point that depended on access to the Chinese market and the good graces of Chinese film regulators," said Aynne Kokas, the author of "Hollywood Made in China" and a media studies professor at the University of Virginia.

"To make very expensive films in anticipation of being able to deliver them to the Chinese market and then not being certain that's possible is actually a much more financially irresponsible strategy from my perspective." 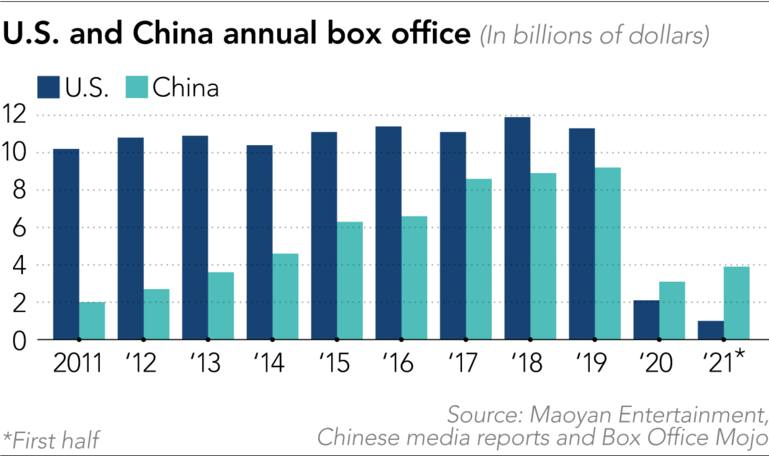 China allows 34 foreign films to be released in the mainland per year. Foreign films also are subject to blackout dates such as the National Day holiday week, when the authorities require that audiences be served only domestic productions.

Representatives of the U.S. industry negotiated with Chinese regulators for years to expand the foreign film quota. The two sides were expected to resume negotiations in 2017 but that still has not happened, according to a source familiar with the matter.

China has also been cracking down on its own entertainment industry, potentially signaling even narrower access to the market.

"You look at all of the criticisms of the so-called sissy boys, the closing down of the K-pop fan clubs, closing down of tutoring services that taught English, English not included in school final exams. ... It's the atmosphere right now that foreign is dangerous, and Hollywood is subject to that as well," said Stanley Rosen, a political science professor who specializes in Chinese politics and society at the University of Southern California. 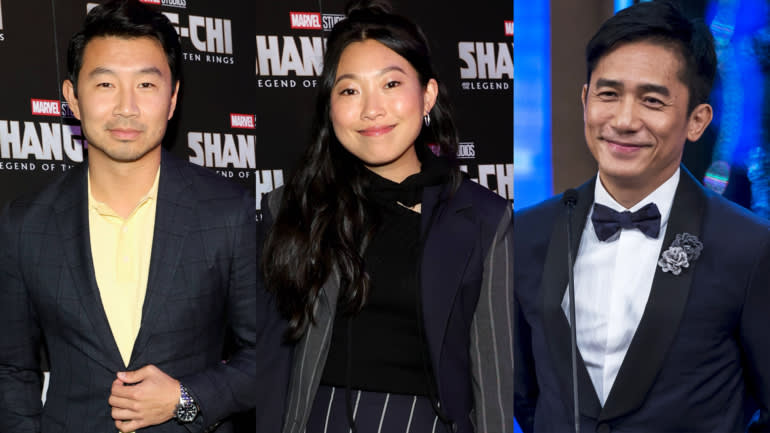 The advent of streaming has opened an even bigger debate about Hollywood's approach to blockbuster releases -- and lessened the sting of the exclusion of major movies from Chinese cinemas.

"[They] would always want to make an extra dollar, why not? But I think the effect of [some blockbusters not being released in China] is probably lessened by the fact that COVID accelerated this shift to streaming," said Douglas Montgomery, CEO of media research company Global Connects and former vice president of category management at Warner Bros. "What COVID does -- and it does so many things in Hollywood -- is provide an excuse to do something different."

"Black Widow," which also did not make it to China, was released simultaneously in theaters and on Disney+. It raked in about $379 million worldwide, according to Box Office Mojo, but its streaming release added a hefty $125 million to the revenues as of Aug. 15, according to a filing in the court battle between "Black Widow" star Scarlett Johansson and Disney.

But streaming in China has roadblocks too for Hollywood's studios. Foreign content is capped at 30% each year, and censorship is tightening. Studios have expressed concerns to U.S. trade representatives regarding both the theatrical and streaming markets in China.

The Chinese market cannot be pushed to the back burner yet.

"Outside North America, there's no other market that is really close to China," said Rosen. "India has the population, but it's going to be very difficult to get folks in India to do anything like they do in China. They really have to continue to count on China, but just with a lesser part of the equation."

India makes more films than any other place in the world, but ticket prices are low and tastes vary by region, making it harder for blockbusters to thrive, Rosen said. China's middle class is both much larger and more receptive to Hollywood films.

But if Hollywood still needs China, it is an open question whether China needs Hollywood. In the first half of 2021, China's box office reached roughly $3.9 billion, according to the tracking app Dengta, and although the highest-grossing films used to be Hollywood blockbusters, domestic films have taken the crown for the past six years. "Hi, Mom," a heartwarming Chinese movie about a woman going back in time in an attempt to make her mother's life better, has the highest box office of 2021 worldwide so far, at $822 million.

Patriotic Chinese blockbusters have generated much revenue as well. "The Battle at Lake Changjin" raked in $203.2 million over the National Day weekend in China, according to Box Office Mojo.

Montgomery of Global Connects said China is definitely not crossed off the list but may be shifting out of focus for Hollywood.

"U.S. companies and Hollywood are very short-term, they're always looking for a quick boost of money, but if they've been looking long-term, the signs were already there," said Montgomery. "The boom years of 2015 and 2016 were already gone, and the Chinese [government] was cracking down on these things. ... Now it's even more cloudy."