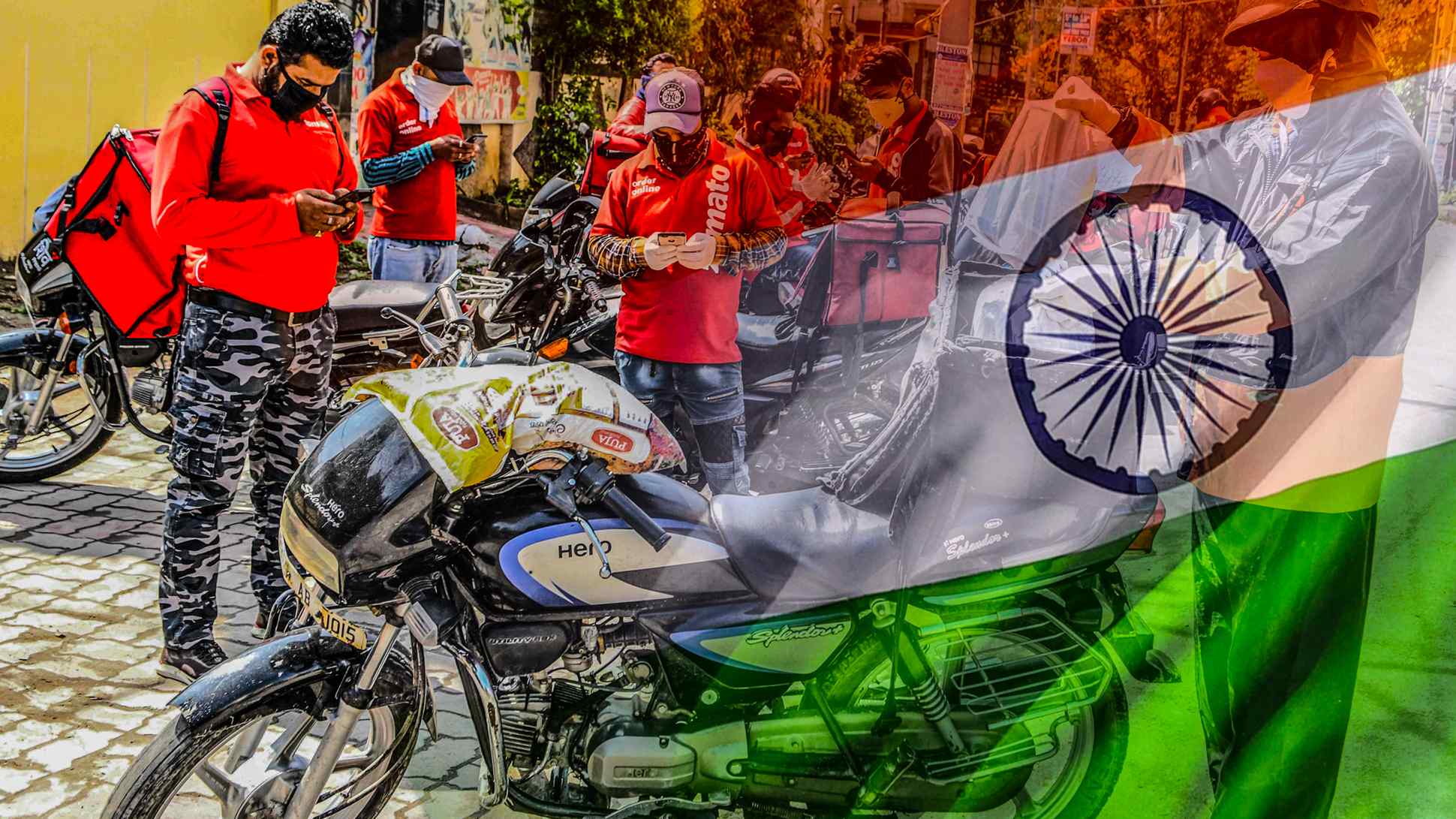 Indian tech unicorns, such as the online food delivery company Zomato, are bringing about a turning point in the IPO scene in India. (Source photo by AFP/Jiji)
Business Spotlight

TOKYO -- A list of 186 "anchor investors" that bought into Zomato's initial public offering is a symbol of India's stock market frenzy.

The list, which the food delivery company disclosed on July 13 ahead of its stock market debut, includes giant U.S. asset managers BlackRock and Fidelity as well as government-linked managers like the Canada Pension Plan Investment Board and the Abu Dhabi Investment Authority -- some of the biggest names in investing.

Despite listing on the domestic exchange, the majority of Zomato shares were marketed to foreign investors, many of whom have profited handsomely from the pandemic-fueled tech stock rally. After the blockbuster listing of U.S. peer DoorDash last year, eyes have shifted toward India, a country that has dozens of unicorns -- privately held companies worth $1 billion or more -- but lacks a track record of IPOs.

The stock's popularity among the big names has, in turn, lured domestic asset managers. A "dividend yield" mutual fund that subscribed to Zomato's IPO drew attention on social media. Zomato, which has been burning cash to acquire users, has not paid a dividend for at least the past three fiscal years, according to its prospectus.

"There is a FOMO effect" said one Indian tech executive, using the acronym for "fear of missing out." "Indian mutual funds have for a long time resisted investing in these startups. But now they suddenly realize that they can't ignore this wave ... so their main objective right now is that if there is a wave, then they also have to ride it." The bets have so far turned out to be lucrative. Zomato sold shares to investors at 76 rupees ($1.02) per share. They began trading at the Bombay Stock Exchange and the National Stock Exchange on July 23 at 115 and 116 rupees, respectively. The stock price reached 141.7 rupees on July 29, up 86% from the public offering price, giving the company a market capitalization of about $15 billion.

For many industry participants, the stellar stock market debut was a relief but also within their expectations. India's first major tech IPO was supported by global banks, which lined up hundreds of meetings, and smoothly passed screening by stock market regulators. The listing also came as regulators in China, a major source of tech IPOs, began cracking down on local tech companies listing in the U.S.

Some Indian companies are also benefiting from a widespread ban on Chinese apps in India last year following a border clash between the two countries. Among the list of banned apps were those related to the mobile payment service Alipay. The policy is giving local startups more room to grow in a market where an increasing portion of its 1.3 billion people is adopting digital services.

The backdrop has led to some of India's biggest tech companies lining up to tap the stock market. Zomato was already among the top 10 IPOs ever in India. One97 Communications, parent of digital payment provider Paytm, recently filed a draft prospectus for an IPO to raise up to 166 billion rupees ($2.2 billion), which would make it the biggest on record for an operating company. The current record is held by mining company Coal India, which fetched 154 billion rupees in 2010.

The race to go public is driven by "the fact that the markets are so receptive and investors are very keen," said an executive at an Indian tech company that is preparing for an IPO. Zomato aims to use the funds gained from its listing to gain an edge over its rivals.   © Reuters

As more and potentially bigger Indian IPOs come over the horizon, whether the excitement can last will be an existential question for the country's tech startups. The most mature companies have spent more than a decade raising capital in private markets and face growing pressure from early employees and investors to provide an opportunity to cash out. But competition remains intense as a newer generation of startups continue to raise capital at high valuations.

Zomato's battle with key rival Swiggy is shaping up to be a test of whether an IPO brings an advantage over staying private.

A few days before Zomato's shares began trading on Indian stock exchanges, Swiggy announced that it had raised $1.25 billion from investors including SoftBank's Vision Fund 2. Swiggy said the funding round "was heavily oversubscribed following strong interest from investors."

Both Zomato and Swiggy offer a smartphone app for food delivery. Zomato, founded in 2008, has more than 350,000 restaurant listings, including about 150,000 that offer delivery. The company operates in more than 500 cities and has 170,000 delivery staffers. It acquired the Indian food delivery unit of Uber Technologies in 2020.

Swiggy, founded in 2014, has grown quickly to become a formidable competitor. The company also said it has about 150,000 restaurant partners and is present in 500 cities. Both companies have doubled down on growth after the fresh fundraising, citing India's nascent market for digital services. In India, it has become relatively easy for low earners to use smartphones due to low data charges. Smartphone ownership has skyrocketed from 5% of the population in 2013 to about 40% in 2020, enabling services using smartphone apps to spread across the country.

Renub Research, an Indian research firm, expects the online food delivery market in the country to grow to $21.4 billion in 2026, about five times that of 2020. Lockdown measures during the COVID-19 pandemic have also boosted demand for food delivery.

"What essentially we're disrupting here is the Indian habit of home-cooked food," Zomato co-founder Gaurav Gupta said in an online news conference this month. "There is large headroom for increasing food delivery adoption. Only 8% of the people who have access to the Internet end up ordering food online, whereas in some of the other markets, the numbers are as high as 38 to 53%. So we're very excited with the opportunity in front of us."

The battle is expanding beyond food delivery. Zomato agreed to invest $100 million in the grocery delivery startup Grofers in June, reentering a segment that it exited last year. Swiggy also said it will use the proceeds to expand its grocery delivery business. "Our biggest investments will be in our non-food businesses that have witnessed tremendous consumer love and growth in a short span," CEO Sriharsha Majety said in a news release. Digital payment provider Paytm is highly regarded by investors, but competition in the Indian fintech market is fierce.   © Getty Images

The fintech space is even more crowded, according to analysts. In a February report, Credit Suisse profiled more than 20 players in payments, lending, insurance and wealth management. Paytm's core mobile payment business is facing intense competition from similar services by Google and Flipkart-owned PhonePe. Paytm's total income for the fiscal years ended March 2020 and 2021 both declined from a year earlier, according to its draft prospectus.

In response, Paytm has positioned itself as a one-in-all financial services provider spanning wealth management and lending, according to a fund manager that recently held talks with the company's executives ahead of its IPO.

The stock market rally shows no signs of slowing -- India's benchmark Sensex index is hovering near all-time highs -- giving the companies in line a strong tailwind. While there is an emerging generation of retail investors in India, a heavy reliance on foreign investors is unavoidable. India's securities regulations generally require loss-making companies to allocate at least 75% of their shares to qualified institutional buyers.

Government intervention is also on investors' minds in the wake of China's crackdown on homegrown tech giants. Zomato has listed "changing regulations" as a risk factor in its IPO papers, and a restaurant industry group has called on regulators to probe what it regards as anti-competitive practices by Zomato and Swiggy, including their commission charges. Zomato's Gupta said both restaurants and its delivery partners "are core to our ecosystem" and that the company is committed to resolving issues.