NEW DELHI -- Plans to privatize state-owned flagship carrier Air India were already in doubt even before the new coronavirus outbreak wreaked havoc on the travel industry. Now, the government may have to knock down the price of the airline, some say.

India ordered a 21-day nationwide lockdown in late March, following similar actions across Europe and some parts of America as the virus continues to spread. Air travel has also plunged over the last few weeks, leaving Air India's privatization plans in disarray.

The government said in January it would sell the entire company to attract investors, after an offer of 76% two years ago failed to draw any takers. Even so, investors said they were expecting a deep discount. The government has also extended the deadline for preliminary bids to April 30 from March 17.

Saurabh Mukherjea, founder and chief investment officer of Marcellus Asset Management with $800 million under control, said: "A top-class brand with valuable landing rights and an engineering pool is likely to go for a big discount. The government is keen on getting rid of the loss-making airline. It's a rare bargain."

For the government, any delay in the current economic climate means higher costs. "The submission date for expressions of interest has already been pushed back by six weeks," said Kapil Kaul, director at the Centre for Asia Pacific Aviation. 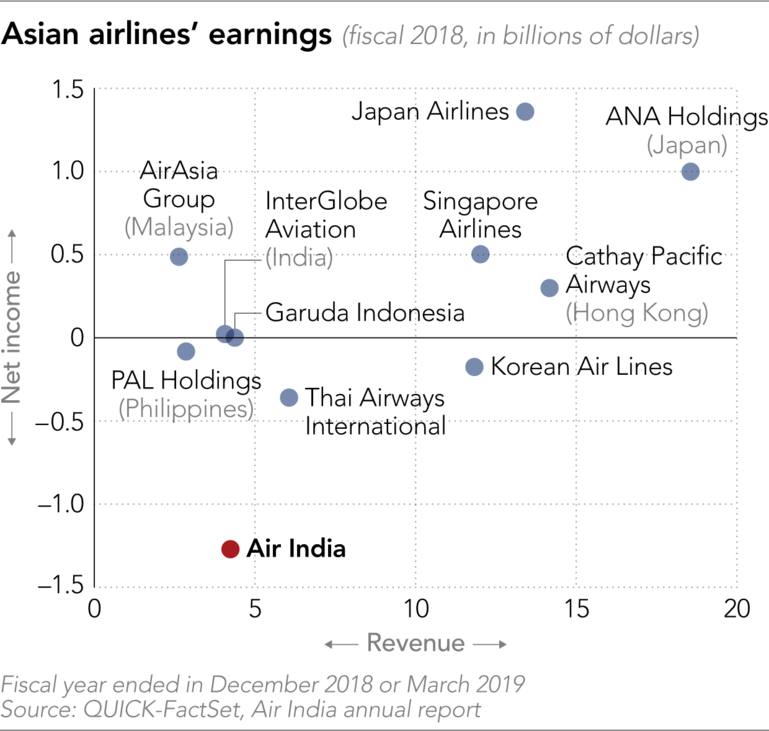 "As a result, the government will need to commit significant and immediate interim funding of $300 million to $400 million for the national carrier to ensure it is able to operate at least in its current condition until such time as the sale transaction is concluded," he said.

The beleaguered airline has grounded its entire fleet, and analysts say the government may freeze some costs such as parking and consider subsidizing maintenance of the planes to keep costs down.

In the revised deal, the government transferred about half of Air India's total debt of nearly 600 billion rupees ($9 billion) into a special purpose vehicle to reduce the financial burden on potential buyers to $4 billion.

Air India has struggled with competition over the last few years as budget airlines ate into its market. The heavily indebted, loss-making carrier also faces labor unions that want continuation of complimentary tickets to employees and a full year of guaranteed employment from any new owner.

Analysts said potential bidders, such as Tata Group and InterGlobe Aviation, owner of the country's largest airline IndiGo and Adani Group, have been hard hit by the pandemic, with acquisitions unlikely to be a large part of corporate strategy. Brian Pearce, chief economist at the International Air Transport Association, echoed this pessimism. "Air India's disinvestment process might be quite difficult at this moment amid the coronavirus outbreak," he told media.

The global airline industry has been devastated by travel restrictions. The International Air Transport Association predicted on Mar. 24 that passenger revenues worldwide could plummet $252 billion, or 44% below 2019. This is more than double the $113 billion decrease it forecast less than three weeks ago.

However, sources in the Indian Ministry of Civil Aviation are still putting on a brave face. "Air India is a first-class asset. Even though valuations may drop in the current scenario, we will have enough takers for the Maharajah [the airline's mascot]," said a senior source who requested anonymity. "It will be a very good value opportunity for the bidder."

Marcellus Asset's Mukherjea said if India wants to sell the airline, it will have to do so in a buyer's market. "The government has given much thought and allowed nonresident Indians to own 100% equity," he said. "I foresee an overseas Indian company bidding for Air India despite the current storm."