MUMBAI -- When Walmart bought 77% of Indian online store Flipkart this year, the U.S. bricks-and-mortar retailer intended to get the jump on Amazon in one of the world's biggest markets by tapping into its enormous potential for e-commerce.

Now Amazon looks to be doing the opposite in a bid to take advantage of the country's growing love for offline shopping.

Amazon CEO Jeff Bezos is reportedly closing in on a deal for a 9.5% stake in Future Retail, one of India's largest physical store chains. The agreement could be finalized within two weeks.

This may be just the first step in a full takeover. Local media say both parties have agreed an option that lets Amazon buy out Future Retail over an extended period, possibly eight to 10 years, subject to Indian laws.

Future Retail operates a variety of retail brands in the hypermarket, supermarket and home goods segments, with more than 1,000 stores in 250 cities. More than 500 million customers walk into the stores annually, buying products and services supplied by 30,000 entrepreneurs and manufacturers of varying sizes from across India.

If a deal is struck, it will be Amazon's third investment in a physical retail chain in India, and the second since rival Walmart announced its acquisition of a stake in Flipkart in May for $16 billion. Amazon bought a 5% stake in Shoppers Stop for 1.79 billion rupees ($25.3 million) in September 2017, and has since acquired a stake in Aditya Birla Group's 'More' chain of supermarkets.

Amazon's move comes as it steels itself for Walmart's assault on the Indian e-commerce market.

Walmart will now try to leverage its Flipkart investment to build an online-offline presence, exploiting its range of groceries, warehouses and wholesale cash-and-carry stores, which it plans to expand aggressively.

Flipkart's $3.8 billion in revenue for the year ended in March was 19% higher than Amazon's $3.2 billion top line in India, said a report by Barclays. But Amazon's gross merchandise value totals $7.5 billion -- 20% higher than Flipkart's $6.2 billion. 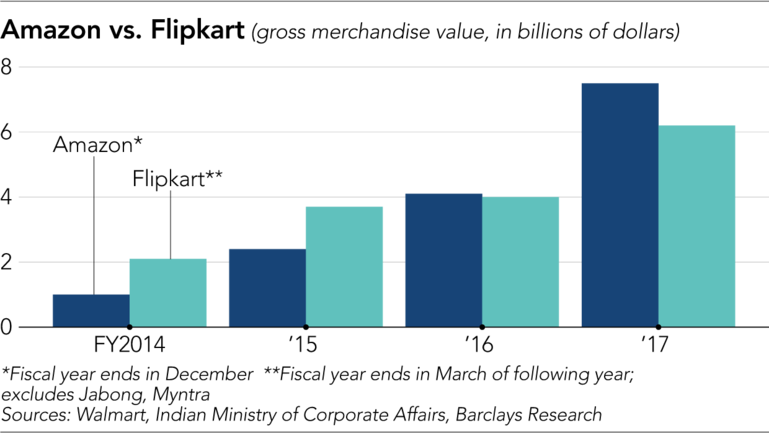 Amazon, which entered the Indian market in 2013, reportedly came late into the race for Flipkart with a lower offer. It now appears to be planning to take the battle to Walmart's home turf of offline stores.

A deal also would strengthen the Indian retailer's offline position through greater online reach via Amazon.

"They are in online retail, and then they are merging in offline retail -- buying shopping malls," Satish Meena, senior forecast analyst at Forrester Research, said of Amazon. "These practices are important in the grocery market, and they need to be offline to deliver this to customers."

Online retail, though growing fast, commands only 3% of the retail market, Meena said.

"I think India is still mainly an offline market, and there are a number of challenges in online which are difficult to overcome," said Harish H.V., a Grant Thornton India partner. "The physical fulfillment -- when to deliver, how to deliver and delivery -- are challenges for online players in areas like grocery. And when it comes to fashion, it will still largely be dominated by offline."

Retailers are tweaking their strategy to be present in both online and offline channels, catering to the habit of Indian consumers who love to touch and feel and for whom shopping is a family experience.

Yet Indians also increasingly shop online thanks to the greater availability of cheaper phones and data fees.

A number of retailers are exploring multichannel retailing. Billionaire Mukesh Ambani's telecom group Reliance Jio is creating a platform to connect its broadband customers to mom-and-pop stores, while e-commerce platform Paytm Mall also is also banking on the online-to-offline strategy for growth. It is developing a concept for customers to browse Paytm Mall's catalog in physical stores, and buy the product on the spot or have it delivered to the home later the same day.