A Reliance store in Mumbai. The parent company of Reliance Retail has sold a 10.09% stake in the unit as it gears up for a protracted fight for a bigger slice of India's e-commerce market.   © Reuters
ROSEMARY MARANDI, Contributing writerNovember 20, 2020 16:33 JST | India
CopyCopied

MUMBAI -- Reliance Industries raised 472.6 billion rupees ($6.4 billion) for its retail arm Reliance Retail Ventures by selling a 10.1% stake to a coterie of global investors that has allowed Chairman Mukesh Ambani, India's richest man, to reload his arsenal for a battle with American billionaire Jeff Bezos of Amazon fame.

The sale brought in investors like Silver Lake Partners, KKR, General Atlantic and TPG from the U.S.; Mubadala Investment and Abu Dhabi Investment Authority from the United Arab Emirates; and the sovereign wealth Public Investment Fund from Saudi Arabia.

PIF picked up the biggest stake, 2.04%, for 95.5 billion rupees. Silver Lake and its co-investors' 2.0% stake is the second largest; they paid 93.7 billion rupees, according to data provided by the company.

Reliance is a Goliath in India's retail sector but lags Amazon.com and Walmart-owned Flipkart in the e-commerce space. With leading investment companies on board, Reliance Retail now has the funds to compete off and online in India's estimated $700 billion retail markets.

"We are proud to have such strong and reputed partners in RRVL," Isha Mukesh Ambani, director of Reliance Retail and daughter of Mukesh Ambani, said in a statement on Thursday. "We feel honoured by the phenomenal interest shown by investors in our business and look forward to working with our partners to benefit from their experience and global connectivity.

"With our focus on New Commerce, we are committed to playing a transformational role in the Indian retail sector by empowering millions of merchants and micro, small and medium enterprises." 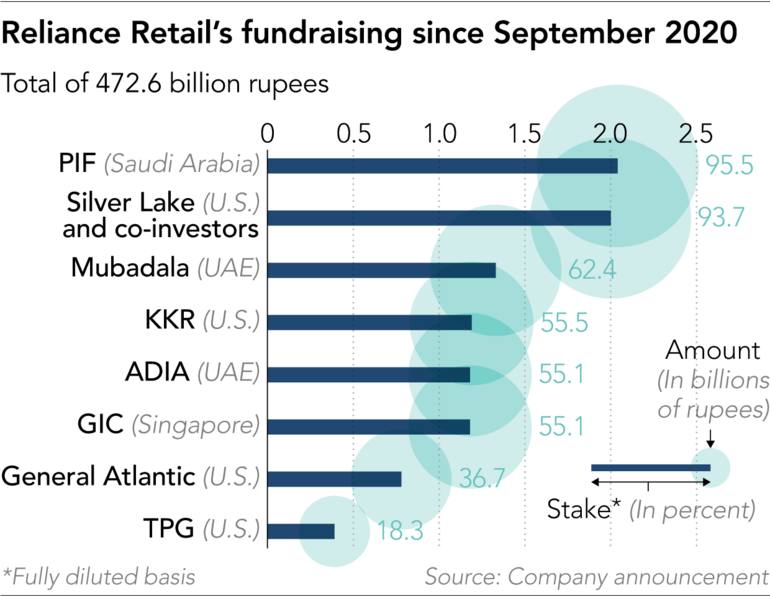 Reliance Retail was operating 29.7 million sq. feet of retail space at the end of September, up 21% from a year earlier. For the quarter through that month, its earnings before interest taxes depreciation and amortization were 20 billion rupees, up 86% from the previous quarter, showing a recovery amid the COVID-19 pandemic.

The completion of the current phase of fundraising comes as Bezos's Amazon is trying to block Ambani's ambitions for a bigger slice of India's retail pie.

Court battles aside, Ambani has been on an acquisition spree, and Reliance Retail has its eyes on a number of smaller off and online retailers.

Last week, the company bought online furniture selling platform Urban Ladder for 1.82 billion rupees. That followed the acquisition of a majority stake in digital pharmacy startup Netmeds in August. In July, the company picked up a 15% stake in online underwear company Zivame.