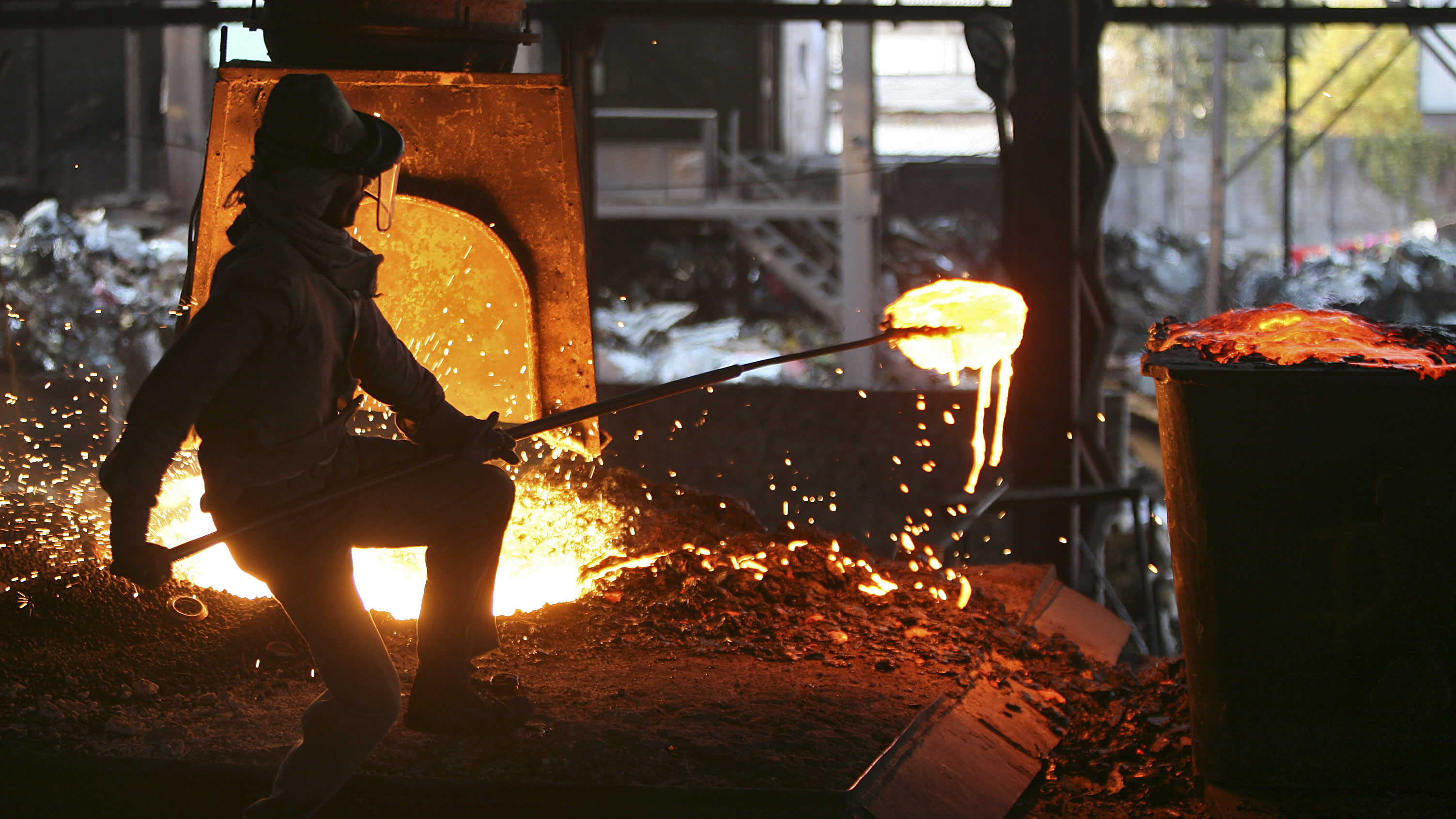 A laborer works inside a steel factory in India.   © Reuters

MUMBAI -- A series of bankruptcies in India's steel industry has put the sector on course for a sweeping consolidation, as producers here and abroad battle to take over prime assets.

Essar Steel, the country's fourth-largest steelmaker, is up for sale after filing for bankruptcy proceedings last year, and it is expected to announce a buyer as soon as in May. The winning bidder would gain control of 10 million tons in annual production capacity, equal to one-tenth of India's crude steel output in 2017.

India is expected to eclipse Japan this year as the world's No. 2 steel producer behind China. But Essar, like many of the country's steelmakers, has been forced into insolvency by a pile of debt stemming from overinvestment and rising production costs, even as output has remained strong for goods ranging from steel sheet to pipes.

A joint bid for Essar by ArcelorMittal and Nippon Steel & Sumitomo Metal is among the top contenders. Though Luxembourg-based ArcelorMittal's initial bid was ruled ineligible due to the company's joint venture with a debt-laden Indian peer, the company has since left that partnership and re-entered the running with its Japanese partner.

"We believe that ArcelorMittal, together with [Nippon Steel], has the most relevant credentials and experience, and is the most credible owner for Essar Steel," Chairman and CEO Lakshmi Mittal said.

Numetal, a vehicle backed by Russia's VTB Capital and Essar's founding family, also is making a new bid after its first offer was ruled ineligible. This time around, the company has teamed with JSW Steel, India's top steelmaker with 18 million tons of production capacity.

Both ArcelorMittal and Numetal appealed their previous ineligibility rulings to India's National Company Law Tribunal. NCLT on Thursday asked the committee of creditors of Essar Steel to reconsider the first round of bids.

If the tribunal fails to issue decisions by April 29 -- 270 days after bankruptcy proceedings began -- Essar's assets, such as a large steel mill and blast furnace complex in India's Gujarat state, could be liquidated, said Shigeo Asano, managing director of JFE Steel India. Japan-based JFE Steel holds a 15% stake in JSW.

Tata Steel, India's No. 3 producer, showed interest in Essar but has declined to bid. The company already has a deal on its plate: Tata was chosen over JSW in March to buy Bhushan Steel, a struggling midsize steelmaker. The deal combines Tata's 13 million tons of capacity with Bhushan's 5.6 million tons.

These companies' creditor banks went to the tribunal to set bankruptcy proceedings in motion. While Tata takes over Bhushan, Monnet Ispat will be acquired by JSW.

Vedanta Resources, of the sprawling Vedanta Group, said Tuesday that the tribunal approved its plan to acquire Electrosteel.