BHP moves to shed oil and gas for nickel, tapping into EV demand A BHP-invested oil field in the Gulf of Mexico: The company says it is considering a potential merger of its petroleum business with Woodside Petroleum. (Photo courtesy of BHP)
FUMI MATSUMOTO, Nikkei staff writerAugust 17, 2021 05:05 JST | Australia
CopyCopied

SYDNEY -- Anglo-Australian BHP Group on Monday revealed it is in talks to sell its petroleum business in a deal potentially worth 20 billion Australian dollars ($14.7 billion) as the global push toward decarbonization spreads to the traditionally carbon-intensive commodities sector.

"BHP confirms that we have initiated a strategic review of our petroleum business to reassess its position and long-term strategic fit in the BHP portfolio," the company said in a release.

"One option is a potential merger of the petroleum business with Woodside Petroleum and a distribution of Woodside shares to BHP shareholders," it added.

Australia-based Woodside that day also issued a release confirming the two sides were "engaged in discussions" for a potential deal.

BHP's petroleum and gas business, which includes assets in Australia, the Gulf of Mexico as well as Trinidad and Tobago, generated $4.07 billion or about 9.5% of its revenue for the year ended June 2020. Its earnings before interest, taxes, depreciation, and amortization, or EBITDA, came to $2.27 billion -- about 10% of the company's total. Results for the year ended this June are due out Tuesday.

The company has been making strides to offload its fossil-fuel assets since 2018. That year, it sold its North American shale gas and petroleum business to a BP unit for more than $10 billion. In 2019, then-CEO Andrew Mackenzie signaled plans to exit energy coal, saying it was "not a business that is going to offer the prospects for growth and would compete for capital" compared with BHP's other businesses.

This latest news follows BHP's announcement in June that it would sell its stake in Colombia's Cerrejon coal mine to Glencore. The company is in talks to sell Mount Arthur, its only remaining coal mine, further downsizing its coal operations that now account for 15% of total revenue. BHP plans to maintain part of its metallurgical coal business.

"After having waited too long to divest thermal coal, and now having to resort to selling for cents on the dollar, BHP should know it's better they exit petroleum sooner rather than later," said Credit Suisse analyst Saul Kavonic. "A sale to Woodside may present a last potential opportunity to offload all petroleum assets together." 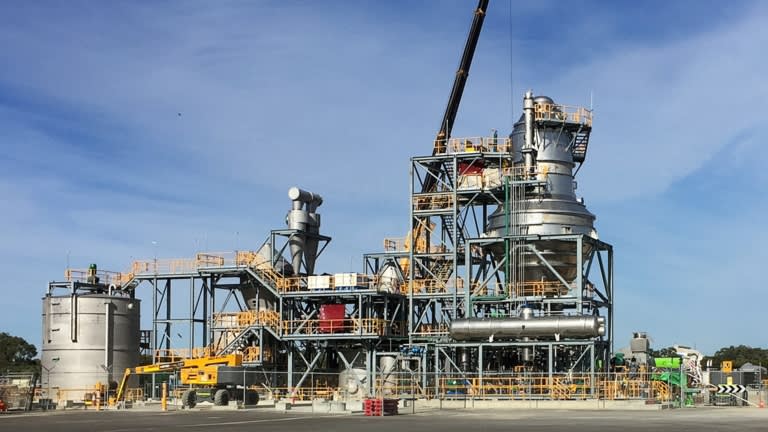 Indeed, the company is shifting its focus to nickel, used in lithium-ion batteries for electric vehicles. On July 22, it announced plans to supply an unspecified amount of nickel mined and processed in Western Australia to Tesla, the world's largest EV maker.

"Demand for nickel in batteries is estimated to grow by over 500% over the next decade, in large part to support the world's rising demand for electric vehicles," said BHP Chief Commercial Officer Vandita Pant.

BHP plans to bolster its ability to process the material as well. A source familiar with the matter said the company would soon start producing nickel sulfate, used in lithium-ion battery nodes, at a new plant in Western Australia.

These strategic moves come as the company's rivals dump fossil fuel-related assets and turn their focus toward decarbonization. Rio Tinto exited the coal business in 2018, and Australian mining major Fortescue Metals Group looks to start producing and exporting hydrogen as early as 2023.

BHP aims to turn nickel, which it deems a "future-facing" commodity, into its next driver for growth amid the industrywide shift toward decarbonization.

Yet concerns persist. Noront's assets in Canada, for instance, are located in an area well known for its rich deposits. But the area also presents logistical challenges like underdeveloped port infrastructure, according to a source familiar with the matter. BHP may need to make additional investments if Noront accepts its offer.

In addition, BHP's reliance on the Chinese market in iron ore, which generated roughly half its revenue and 65% of EBITDA in the fiscal year ended June, poses risks.

Australian ore is currently trading at about $160 per ton on strong Chinese demand. But "probably toward the middle of this decade you will see a plateauing and then a move into the decline of Chinese steel demand," BHP CEO Mike Henry previously said. The company's iron ore business suffered a major hit to its earnings when prices plunged in the year ended June 2016.