Entry of iconic investor sets precedent for unicorns in the region MUMBAI -- Berkshire Hathaway's investment in the parent of Paytm, India's biggest mobile payment service, marks a rare foray by U.S. billionaire Warren Buffett's company into Asian startups and sets a precedent that other unicorns in the region can hope to achieve.

Before the Berkshire investment, One97's valuation was estimated at $12 billion to $15 billion, according to various sources. Oddup, a Hong Kong-based provider of data on private companies, ranks One97 among the 10 highest-valued startups in the world -- a list that also includes ride-hailing providers Uber Technologies and Didi Chuxing and home-sharing platform Airbnb.

Although the value of Berkshire's investment has not been disclosed, the U.S. company likely owns a more than 2% equity stake in the Paytm parent.

Forbes this spring estimated Sharma's net worth at $1.7 billion, earning him the title of India's youngest billionaire.

Paytm is the first pure-play internet business to take investment from Berkshire. Buffett says he avoids investing in technology companies because he cannot easily understand their products or business models. Apple was the first tech stock added to Berkshire Hathaway's portfolio, and that was in 2016.

The Paytm deal also stands out in other ways. Berkshire's portfolio is also famously weighted toward U.S. and large-cap stocks. Chinese electric-vehicle maker BYD has been the only Asian company among Berkshire's notable investments. And Berkshire is not known to have invested in any other privately held startups.

"Berkshire's investment in Paytm was really a surprise," said Teruhide Sato, a Singapore-based venture capitalist who has invested in Indian startups for many years. "It implies they are recognizing the long-term potential of Indian startups."

Berkshire is known for long-term investments in major U.S. corporations such as Apple, Coca-Cola and Goldman Sachs. Because of the continuous profitability of its investments, being included in Berkshire's portfolio is considered an endorsement by Buffett of the company's management skill.

In its public statement Tuesday, Paytm's Sharma said, "We feel both excited and humbled by this endorsement," referring to Berkshire's investment. He expressed expectations for having Buffett's company as a shareholder, citing "Berkshire's experience in financial services and long-term investment horizon." 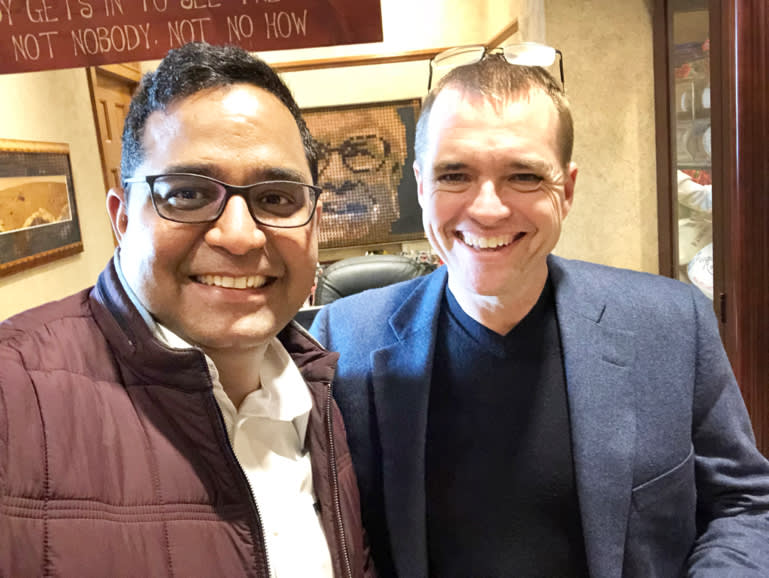 The path to Berkshire Hathaway's funding began at a meeting between One97 founder Vijay Shekhar Sharma, left, and Todd Combs, an investment management lieutenant for Warren Buffett.

Both sides have denied any involvement by Warren Buffett in the Paytm investment decision. It was Todd Combs, one of Buffett's two investment management lieutenants, who made the call. Sharma told Nikkei that the idea of Berkshire investing in Paytm all started when he met Combs in February. Sharma did not meet with Buffett during the lead-up to the deal, he added.

In conjunction with the funding, both sides announced that Combs has joined One97's board of directors. Sharma said in the joint statement that Combs "will bring his wealth of experience to guide our management team."

Combs himself said he was "impressed by Paytm" and was "excited about being a part of [Paytm's] growth story, as it looks to transform payments and financial services in India."

In its annual report this year, Buffett said that he typically learns about investment decisions involving Combs only after the deals are done. That appears to have been true for the Paytm deal as well, and it seems the rapport between Sharma and Combs played a major role in Berkshire's investment decision.

Even though startup investments, especially outside the U.S., likely will remain the exception at Berkshire, the investment in the Paytm operator may be regarded as a replicable precedent by major startups across Asia.

Worldwide, 15 startups have completed funding at a valuation greater than $10 billion, according to Oddup. Among them, seven are based in China, two including One97 are in India, and one is based in Singapore. The remaining five are U.S. companies. The latest investment in One97 at least shows that a market cap of this size could clear a bar Berkshire sets regarding capitalization size of a portfolio company.

The Indian online retail market is estimated to have been worth $18 billion for 2017 and is projected to reach $60 billion by 2020, according to the India Brand Equity Foundation.

One97 is transforming Paytm from a mobile wallet brand into a comprehensive business-to-consumer internet services brand, adding businesses such as an online shopping site, digital payment bank, mutual funds and insurance. In the field of online retail, in particular, competition is heating up among Amazon.com, Flipkart -- an Indian e-commerce startup recently acquired by Walmart -- and other local players, leading every player to compete in capital investments.

One97 is no exception, and it will need to keep up fundraising in the coming years.

Rosemary Marandi in Mumbai contributed to this report.