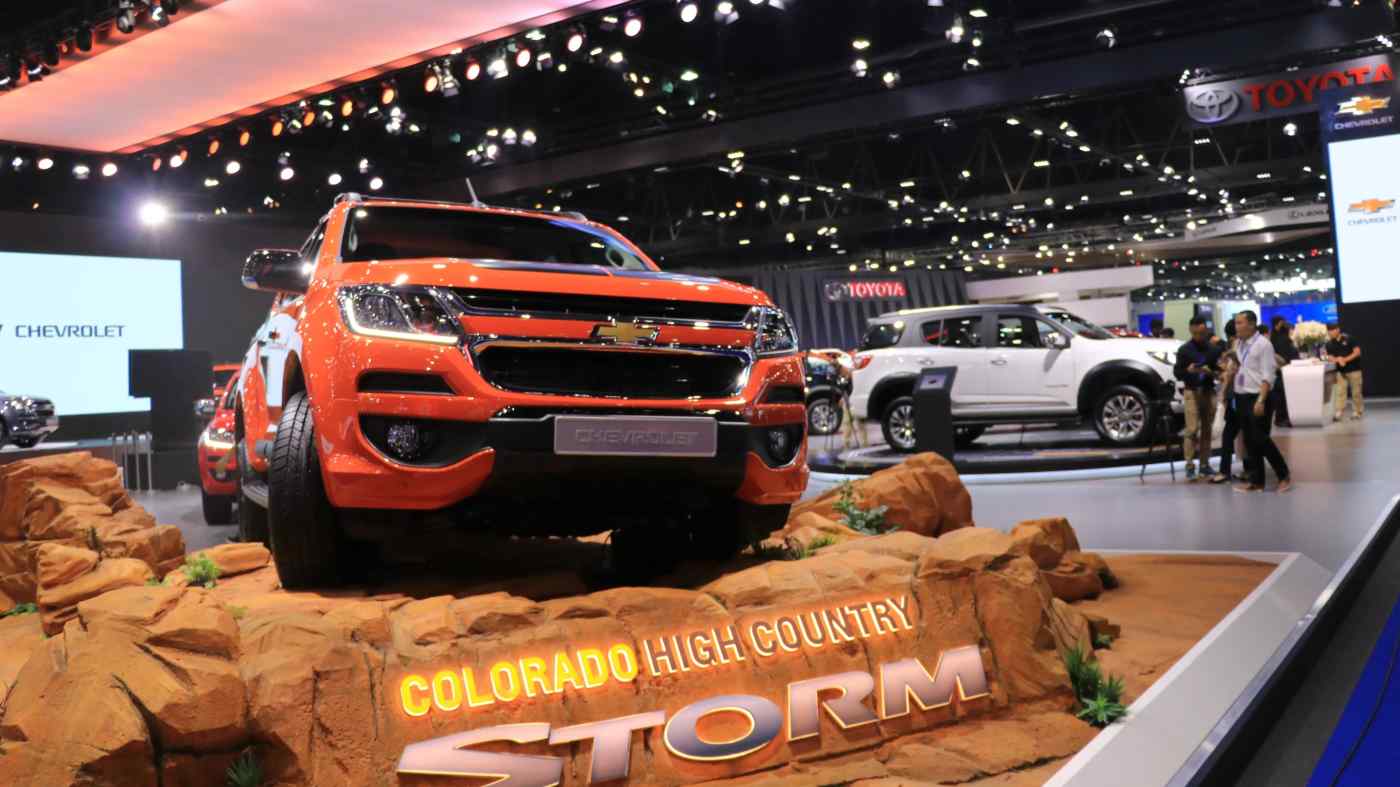 A Chevrolet pickup truck displayed at a motor show near Bangkok in 2018: GM will sell its manufacturing facilities in Thailand to China's Great Wall and suspend all sales in the country this year. (Photo by Hiroshi Kotani)
SHUJI NAKAYAMA and YOHEI MURAMATSU, Nikkei staff writersFebruary 19, 2020 17:55 JST | Thailand
CopyCopied

NEW YORK/BANGKOK -- General Motors is retreating from Thailand as part of a broad downsizing of its Asia-Pacific operations, but the entry of Chinese player Great Wall Motor is expected to cushion the blow to the Southeast Asian country.

Weak sales had eroded profits from the Thai and Oceania operations to levels that made it difficult for the Detroit automaker to justify maintaining them. GM will now shift its regional focus to a smaller subset of markets, including China -- which accounts for more than 40% of global sales volume -- and South Korea even as the coronavirus epidemic threatens consumer and business activities there.

The company said on Feb. 16 it will sell its manufacturing facilities in Thailand's Rayong Province to Great Wall and suspend all sales in Thailand this year. It will also scrap its iconic Holden brand next year as part of a pullout from Australia and New Zealand. This follows the sale of an Indian plant to Great Wall announced last month.

The withdrawal will leave China and South Korea as GM's sole production bases in Asia.

"We are restructuring our international operations, focusing on markets where we have the right strategies to drive robust returns," GM Chairman and CEO Mary Barra said.

The company is "prioritizing global investments that will drive growth in the future of mobility, especially in the areas of electric vehicles and autonomous vehicles," she said.

The factory acquisition will make state-run Great Wall the latest Chinese automaker to gain a foothold in Southeast Asia. SAIC Motor has operations in Thailand, Indonesia and India, and Zhejiang Geely Holding Group, parent of Geely Automobile Holdings, has a stake in the Malaysian national brand Proton. GM built about 50,000 vehicles a year in Thailand, including Chevrolet pickup trucks, and exported to such markets as the Philippines and Indonesia. But sales have disappointed.

Given "low plant utilization and forecast volumes" at the Rayong facilities, GM has concluded that keeping production there is "unsustainable," the automaker said. And without local production, Chevrolet would not be competitive in Thailand, it added.

GM has 1,500 full-time employees across Bangkok and Rayong. The large majority of those positions "will be separated," said GM Thailand.

Foreign exchange rates have not helped matters. The Thai baht has generally strengthened since 2015, now hovering around a roughly six-year high against the dollar, amid strong exports and big inflows of international tourists. The strong currency makes it less profitable to ship Thai-built autos abroad, which has also eaten into margins for other global players.

The acquisition of the Rayong plant will give Great Wall, which has done most of its business in China, better access to the key markets of the Association of Southeast Asian Nations.

The automaker will "expand through the entire ASEAN region with Thailand as the center, and export its products to other ASEAN countries as well as Australia," said Liu Xiangshang, vice president for global strategy.

The takeover of the Rayong facility will mean the factory will not sit idle -- good news for Thailand, Southeast Asia's largest auto production hub and home to hundreds of materials and parts makers.

"We will also promote the development of the local supply chain, R&D and related industries, plus contribute more to the exchequer of both the local Rayong and Thailand governments," Liu said.

Thailand's automotive industry will not suffer significantly from GM's exit, said Surapong Paisitpatanapong, spokesman for the automotive industry group at the Federation of Thai Industries. "GM produced a limited number of cars in Rayong with low sales and exports," local English language daily the Bangkok Post quoted him as saying.

Global automakers have stepped up investments in fast-growing emerging Asian markets since the 2000s. Jumping on the bandwagon, GM built vehicles in Thailand, Indonesia and India for sale across the region. But local and Japanese peers offered extensive lineups of wallet-friendly compacts, and GM was unable to gain as large a foothold as it had hoped.

Its Asia-Pacific sales outside China totaled under 200,000 units in 2019, accounting for less than 3% of its global sales.

Australia-based Holden, which was founded in 1856 as a saddle maker and joined the GM group in the 1930s, had suffered from weakening demand in recent years. Sales tumbled 29% in 2019 to about 43,000 vehicles for a market share of 4.1%, according to Australia's Federal Chamber of Automotive Industries.

GM's Asian overhaul will mean greater dependence on China, where both auto sales as a whole and GM's share of them have been shrinking. The company -- which has been slower than rivals to leverage the popularity of sport utility vehicles -- saw Chinese sales slide 15% on the year in 2019, a bigger drop than the 8% decrease for the broader market.

The coronavirus epidemic is adding to the uncertainty. Some of GM's 15 production bases in China remain closed, including a joint-venture factory in Wuhan, the epicenter of the outbreak. A prolonged suspension would derail plans to roll out a wide lineup of new electrics and other models in 2020.