"2019 will be an important year for us at Suning," Suning Holdings Group Chairman Zhang Jindong said to employees in mid-February, after the Chinese New Year holiday. "We will expand our business portfolio to all areas of retail."

That month, Suning announced a surprise deal to buy all 37 of developer Dalian Wanda Group's department stores. This was followed by the Carrefour China acquisition disclosed on June 23, in which Suning agreed to spend 4.8 billion yuan ($699 million) for an 80% stake. The total price tag for Suning will come to roughly 1.4 billion euros ($1.6 billion) including the business' debt.

The deal, expected to close by year-end, works well for both sides. Suning further expands its retail business with Carrefour's network of hypermarkets in China, which numbered 210 across about 50 cities as of March. Carrefour sheds a business that was once among the biggest players in the market but failed to adapt to the rise of e-commerce, posting a net loss of nearly 600 million yuan for 2018.

Talk had emerged some time ago within the industry that Carrefour would eventually offload its China operations. "Our stores have been getting old, and a major investment is necessary to shore it up, but the head office in France had no interest," said a Carrefour China employee.

The French retail giant was initially approached in January 2018, not by Suning, but by Tencent. While the two companies agreed to a partnership, Tencent was only willing to buy 10% to 20% of Carrefour China -- not enough for Carrefour, which wanted to sell a majority stake. The two sides failed to agree on terms, and talks ultimately fell through. 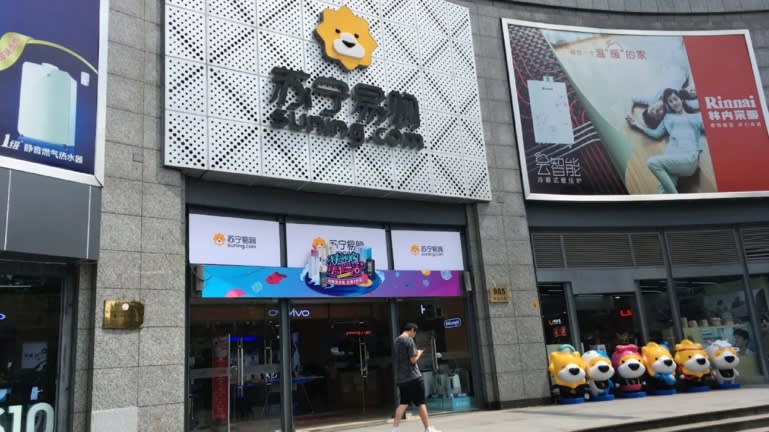 A Suning.com store in Shanghai: Suning has grown beyond its roots as a big-box electronics seller and moved into more general retail. (Photo by Naoki Matsuda)

Suning was quick to jump in, riding momentum from its strong earnings. Suning.com's revenue jumped 30% last year to 244.9 billion yuan, led by online sales, while net profit roughly tripled to 13.3 billion yuan. Suning was so intent on acquisitions that Chinese retail industry watchers saw it as all but certain that the company would participate in any bidding that went on.

Why Suning is so eager to grow its presence in bricks-and-mortar retail, even as the field is overshadowed by online shopping, comes down to the invaluable data that physical stores provide.

Supermarkets and other physical stores are a key source of data on consumer habits that can be difficult to glean online, along with payment information. Such information can be analyzed by artificial intelligence to develop products that match consumer tastes in a more timely manner.

This is why Alibaba and Tencent have been building their own alliances with retailers through investments and outright acquisitions. Alibaba has invested billions of dollars in retail over the past few years, with such deals as the 2017 acquisition of department store operator Intime Retail Group. It also holds a roughly 20% stake in Suning itself. Tencent has made similar moves, including buying into hypermarket company Yonghui Superstores.

Foreign retailers, meanwhile, have found it difficult to keep up with the changing environment.

Carrefour and Walmart, which have been in China since 1995 and 1996, once dominated the market. But in 2016, left behind amid the Alibaba-led advance of online retail, Walmart entered a capital and business partnership with JD.com -- China's No. 2 e-commerce platform -- in a bid to keep its operations there afloat. Tencent is JD.com's top shareholder. Carrefour's deal with Suning came three years later.

Japan's Ito-Yokado is also a shadow of what it was in its heyday in China. The Seven & i Holdings subsidiary once had nine stores in Beijing, but is now down to just one.