SHANGHAI/HONG KONG/TOKYO -- Anta Sports Products, a minor leaguer outside of China, is buying the Finnish owner of athletic brands such as Wilson for 4.6 billion euros ($5.17 billion), looking to compete with Nike and Adidas in both home and away markets.

The Chinese company's acquisition of Amer Sports serves as an acknowledgment that it cannot lean on the home market for growth even as Beijing regulators have clamped down on foreign acquisitions by domestic companies.

"Anta is cheaper than Nike, and the performance of their products isn't bad. I like them a lot," said Li Liang, a 20-year-old male college student who bought a pair of basketball shoes at the company's Shanghai store this month.

Anta, originally known for supplying shoes to popular badminton players, has grown into a household name in China. The sportswear maker aims to boost its recognition abroad, already having signed a shoe deal with basketball star Klay Thompson of the NBA's Golden State Warriors.

Nike and Adidas remain far ahead, however, not only on the world stage but also in China. Nike leads in Chinese market share at 22.1%, followed by Adidas with 18.6% and Anta a distant third at 10.4%.

Anta looks for a boost from Finland's Amer.

"With the acquisition of Amer, the future of Anta's global expansion will definitely change," CEO Ding Shizhong told reporters in late February. 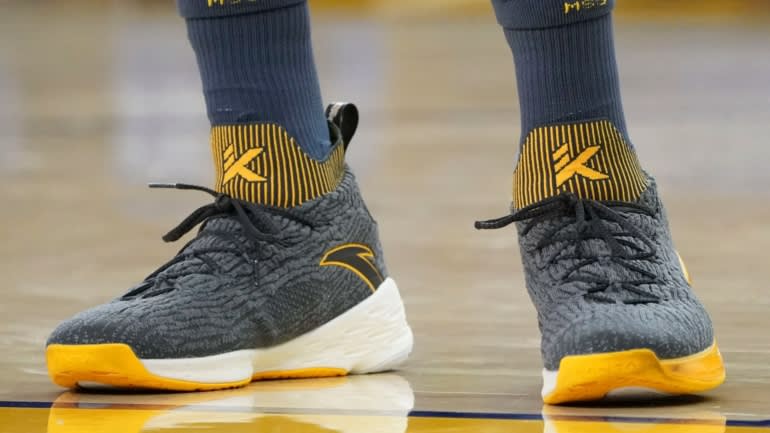 An investor consortium led by Anta and Chinese internet company Tencent Holdings launched a takeover bid late last year for Amer, which has been largely receptive of the deal. Anta said Friday that nearly 95% of its shareholders approved the offer. The acquisition's completion is expected to be announced soon.

This is not Anta's first encounter with a foreign company. It purchased Italian brand Fila's Chinese operations in 2009 and helped Japanese sportswear maker Descente roll out in China through a joint venture with Itochu in 2016.

Anta's Ding and his family are Descente's second-largest shareholder, with a nearly 7% stake. Itochu's takeover bid for Descente, which is expected to be decided on as early as this week, would be convenient for Anta as a partner. Further expansion of the Japanese brand in China is anticipated.

Anta plans to expand its operations overseas in one fell swoop even at the expense of relying on other brands, including those gained through Amer. But it remains unclear how emerging companies from China will fare in the global sports market. Chinese sportswear maker Li Ning's campaign to open its own stores in Europe, the U.S. and Southeast Asia ended unsuccessfully after its brand recognition failed to rise.

As Anta dips its toes in foreign waters, however, Chinese regulators have moved to curb large purchases abroad by domestic companies over concern about capital flight. The government required all overseas acquisitions over $50 million to undergo preliminary reviews in late 2016, leading to a drop in major purchases by Chinese companies the next year. Wanda Group's acquisition of a major U.S. movie studio was among the deals frustrated by the new rules.

Anta's roughly $5.2 billion deal for Amer has made it through Chinese authorities so far. Regulators likely will approve more foreign deals to shore up growth as the Chinese economy slows and domestic companies reach their limits at home.