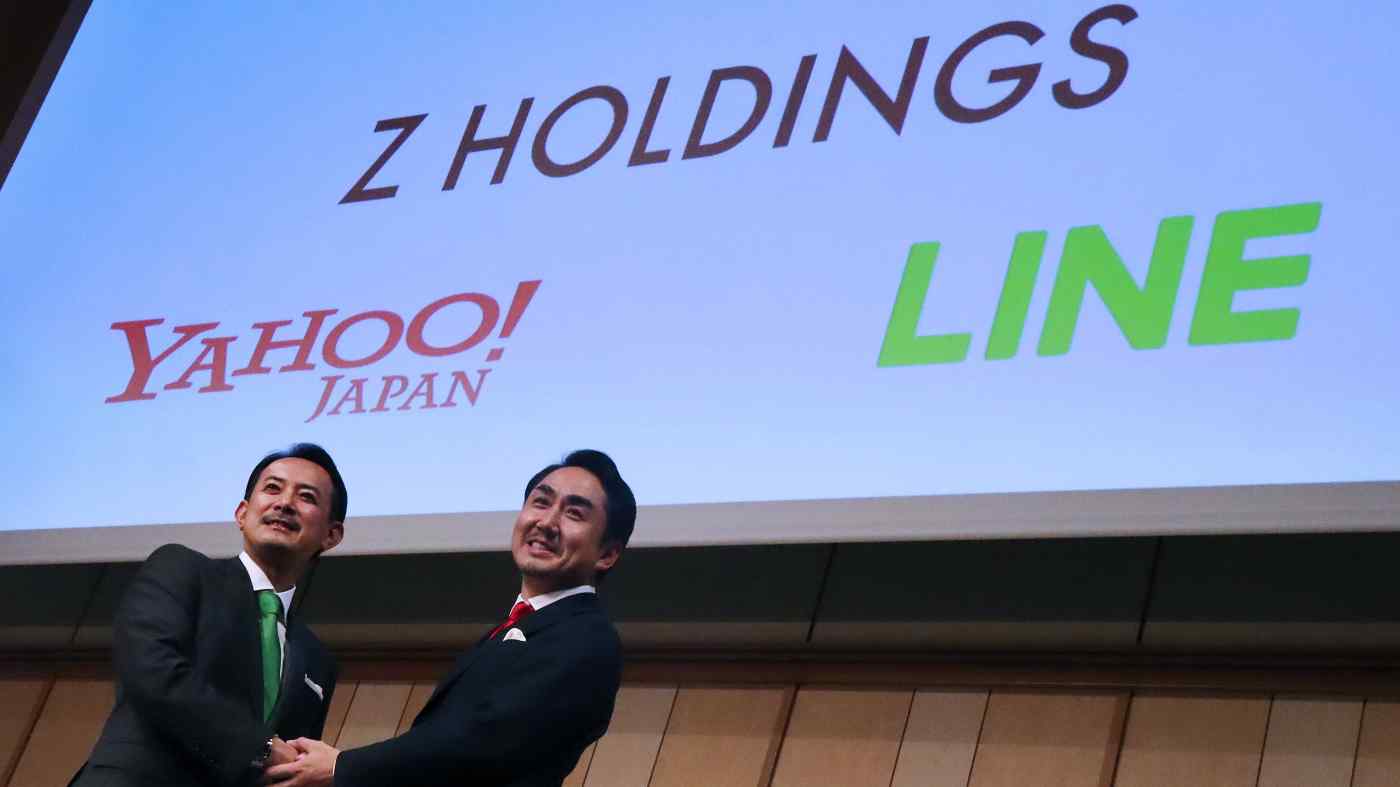 TOKYO -- Yahoo Japan and Line are poised to create Japan's biggest internet company when they complete their merger in October 2020, taking a first step toward competing at the global level by challenging Asia's crowded middle tier.

But the combined force will still lag far behind such global players as Google and Amazon.com, not to mention China's Alibaba Group Holding, in market value.

"We feel a sense of urgency over global tech giants as we face a business environment where winners take all of the talent, cash and data," Line CEO Takeshi Idezawa told a news conference here Monday.

Line, best known for its messaging app, will gain a bigger presence in e-commerce when it joins forces with Z Holdings, the SoftBank Group-backed operator of Yahoo Japan, under a deal announced that day.

"We hope to create a third pole for technology," following the U.S. and China, said Kentaro Kawabe, CEO of Z Holdings, at the event.

This appears an ambitious goal. Z Holdings and Line had a combined market capitalization of 3.2 trillion yen ($29.5 billion) on Monday. That put them somewhat closer to a host of second-tier Chinese platforms, such as Meituan Dianping at $72 billion, JD.com at $48 billion and Baidu at $40 billion.

But a yawning gulf separates this group from the giants of the tech world. Apple was valued at $1.18 trillion as of Monday, Google parent Alphabet at $920 billion, Amazon at $862 billion, and Alibaba at $484 billion.

The Yahoo Japan-Line merger will lay the groundwork for a push overseas by cementing their dominance in terms of Japanese user data.

Line's Idezawa said that despite a push here to create new superapp software providing a broad array of services, "competition with strong global players is extremely tough, even in Japan."

Z Holdings has acquired online companies like office supplies distributor Askul and fashion retailer Zozo in recent years as part of efforts to collect and tap a wide range of customer data. Line, majority-owned by South Korean internet group Naver, can contribute its younger user demographic and other advantages to help the combined group compete abroad.

The merger is also likely to influence next steps by other Japanese internet companies, like Rakuten, whose towering presence in the domestic market has not translated into significant international success.

Data is a major driver of tech acquisitions. Facebook bet big on WhatsApp and Instagram back when they were much smaller operations. Google and Amazon are buying up noninternet targets like electronics makers and logistics-related companies, creating new services and business models.

Google, Apple, Facebook, Amazon and Microsoft have together acquired more than 750 companies over the last three decades, CB Insights reports. Chinese players have also spent aggressively as they have expanded into areas like mobile payments and logistics.

How much synergy Z Holdings and Line can generate through their merger is unclear. Both are topping out in the number of users at home and will need to think outside the box for new ways to add value.

Strong technology companies not only help their home countries economically, but also provide an edge in national security through artificial intelligence, data analysis and privacy protections. Z Holdings and Line still need a clear strategy for competing in a dynamic global market.