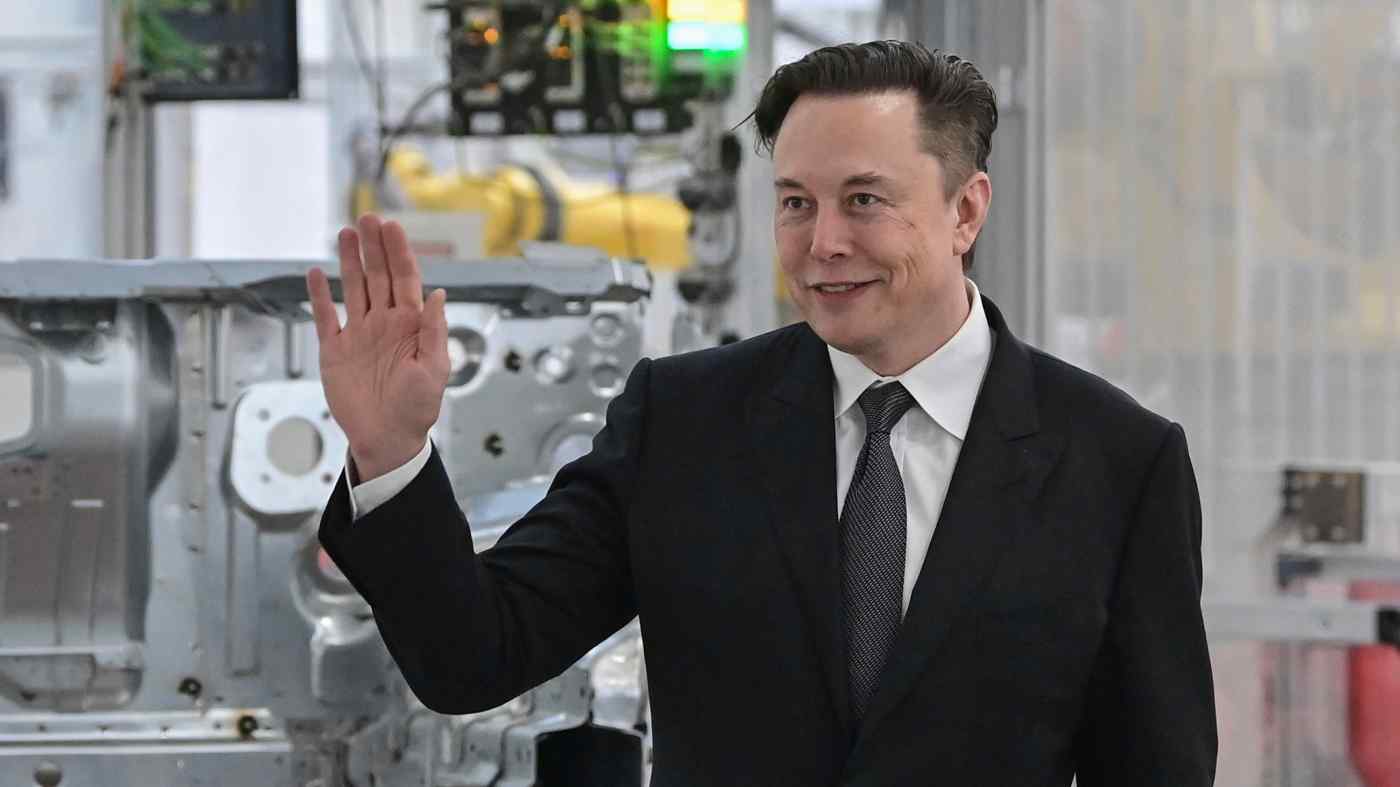 Tesla CEO Elon Musk attends the opening of the Tesla factory Berlin Brandenburg in Gruenheide, Germany, on March 22. If his Twitter deal goes through, Musk said one of his priorities will be to remove "spam bots" from the social media platform.   © AP
May 13, 2022 21:02 JSTUpdated on May 14, 2022 05:41 JST | U.S.
CopyCopied

(Reuters) -- Elon Musk tweeted on Friday that his $44 billion cash deal for Twitter was "temporarily on hold" while he waits for the social media company to provide data on the proportion of its fake accounts.

Twitter shares initially fell more than 20% in premarket trading, but after Musk, the chief executive of electric carmaker Tesla, sent a second tweet saying he remained committed to the deal, they regained some ground.

Musk, the world's richest person, decided to waive due diligence when he agreed to buy Twitter on April 25, in an effort to get the San Francisco-based company to accept his "best and final offer." This could make it harder for him to argue that Twitter somehow misled him.

Since Musk inked his deal to acquire Twitter, technology stocks have plunged amid investor concerns over inflation and a potential economic slowdown.

The spread between the offer price and the value of Twitter shares had widened in recent days, implying less than a 50% chance of completion, as investors speculated that the downturn would prompt Musk to walk away or seek a lower price.

Under the terms of Musk's contract with Twitter, he is entitled to ask the company for information on its operations following the signing of the deal. But this is meant to help him prepare for his ownership of Twitter, not to carry out due diligence and reopen negotiations.

Twitter is planning no immediate action against Musk as a result of Musk's comment, people familiar with the matter said. The company considered the comment disparaging and a violation of the terms of their deal contract, but was encouraged by Musk subsequently tweeting he was committing to the acquisition, the sources added.

Musk came to Twitter's office for a meeting on May 6 as part of the transaction planning process, a Twitter spokesperson said.

Twitter's Chief Executive Parag Agrawal also weighed in, tweeting "While I expect the deal to close, we need to be prepared for all scenarios." On Thursday, Agrawal announced leadership changes and a hiring freeze.

Spam or fake accounts are designed to manipulate or artificially boost activity on services like Twitter. Some create an impression that something or someone is more popular than they actually are.

Musk tweeted a Reuters story from 10 days ago that cited the fake account figures. Twitter has said that the figures were an estimate and that the actual number may be higher.

The estimated number of spam accounts on the microblogging site has held steady below 5% since 2013, according to regulatory filings from Twitter, prompting some analysts to question why Musk was raising it now.

"This 5% metric has been out for some time. He clearly would have already seen it... So it may well be more part of the strategy to lower the price," said Susannah Streeter, an analyst at Hargreaves Lansdown.

Representatives for Musk did not immediately respond to requests for comment from Reuters.

Tesla's stock rose 5% on Friday. The shares have lost about a quarter of their value since Musk disclosed a stake in Twitter of April 4, amid concerns he will get distracted as Tesla's chief executive and that he may have to sell more Tesla shares to fund the deal.

There is plenty of precedent for a potential renegotiation of the price following a market downturn. Several companies repriced agreed acquisitions when the COVID-19 pandemic broke out in 2020 and delivered a global economic shock.

For example, French retailer threatened to walk away from a deal with Tiffany & Co. The U.S. jewelry retailer agreed to lower the price by $425 million to $15.8 billion.

Acquirers seeking a get out sometimes turn to "material adverse effect" clauses in their merger agreement, arguing the target company has been significantly damaged.

But the language in the Twitter deal agreement, as in many recent mergers, does not allow Musk to walk away because of a deteriorating business environment, such as a drop in demand for advertising or because Twitter's shares have plunged.

Musk is contractually obligated to pay Twitter a $1 billion breakup fee if he does not complete the deal. But the contract also contains a "specific performance" clause that a judge can cite to force Musk to complete the deal.

In practice, acquirers who lose a specific performance case are almost never forced to complete an acquisition and typically negotiate a monetary settlement with their targets.

Musk has said that if he buys Twitter he "will defeat the spam bots or die trying" and has blamed the company's reliance on advertising for why it has let spam bots proliferate.

He has also been critical of Twitter's moderation policy and has said he wants Twitter's algorithm to prioritize tweets to be public.

Earlier this week, Musk said he would reverse Twitter's ban on former U.S. President Donald Trump when he buys the social media platform, signaling his intention to cut moderation.

Trump, who started a rival social media app called Truth Social, took to his platform on Friday to weigh in.

"There is no way Elon Musk is going to buy Twitter at such a ridiculous price, especially since realizing it is a company largely based on bots or spam accounts," Trump wrote in a post, adding that his site is much better.