Fast-food giants Jollibee and Yoshinoya team up in Philippines MANILA -- Asian fast-food giants Jollibee Foods and Yoshinoya Holdings are teaming up to open 50 branches of the famed Japanese beef bowl restaurant in the Philippines.

The joint venture, announced by the Philippine fast-food leader on Tuesday, comes as the restaurant industry struggles to find its feet after crippling lockdowns to prevent the spread of coronavirus.

The 50-store network under the venture's "long term" plan will not immediately make a significant impact on Jollibee Foods, which has over 5,800 stores worldwide under over a dozen brands, including its eponymous burger chain, the company said.

Currently, most restaurants in the Philippines are restricted to between 50% and 75% of their dine-in capacity, depending on the local quarantine status. 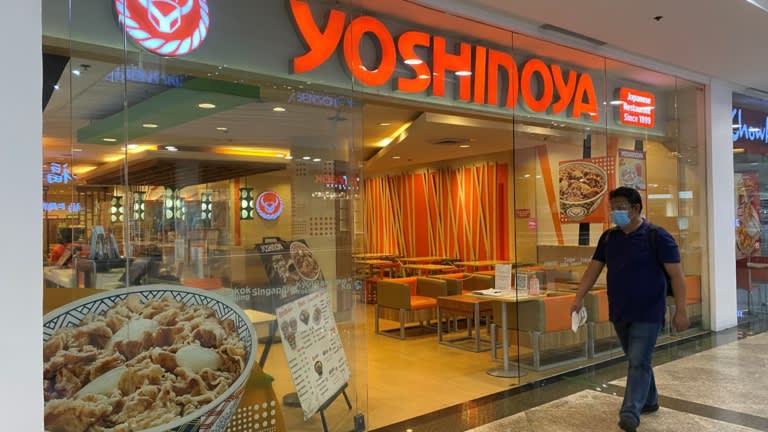 Japan's Yoshinoya plans to set up a $2.7 million joint venture in the Philippines with local giant Jollibee Foods. (Photo by Jun Endo)

The 50-50 joint venture between Jollibee and Yoshinoya International Philippines, which currently operates three outlets in the country, was made possible after Yoshinoya's 20-year partnership with Century Pacific group ended recently, a representative of Yoshinoya told Nikkei.

The joint venture, which will become the franchisee of Yoshinoya in the Philippines, will have an initial capital of 130 million pesos ($2.7 million) and its own management team.

Yoshinoya will be Jollibee's first foray into Japanese food, which has caught on the Philippines lately.

Jollibee, founded by entrepreneur Tony Tan Caktiong from an ice cream shop in Manila in the 1970s, has either partnered with or purchased local and foreign fast-food companies over the past two decades as it aims to become one of the world's largest quick-service restaurants.

But the pandemic has threatened the Philippine company's ambition.

Jollibee on Monday said it booked an 11.5 billion peso net loss last year, a reversal from a 7.3 billion peso profit in 2019. System-wide sales from company-owned and franchised outlets fell 28% to 176 billion pesos as the pandemic forced the company to shut a total of 486 stores worldwide.

Jun Endo in Manila contributed to this report.