The three companies have had a strained alliance since the arrest last year of Carlos Ghosn, former chairman of the three companies. (Nikkei Montage/AP)
Nikkei staff writersMay 27, 2019 20:22 JSTUpdated on May 28, 2019 15:39 JST | Japan
CopyCopied

PARIS/TOKYO -- Fiat Chrysler Automobiles seeks to create a far-reaching global partnership that would tie it to not only Renault but also to the French automaker's Japanese partners, Nissan Motor and Mitsubishi Motors.

"I have huge respect for Nissan and Mitsubishi, and their products and businesses," said John Elkann, chairman of the Italian-American multinational carmaker, in a written statement to Nikkei. "Our proposed merger with Renault will create the potential to build a global partnership with all three of these great companies during this period of unprecedented transformation in our industry."

Elkann is offering to create a bigger partnership that encompasses the one between Nissan and Renault. "Our proposal to Renault is one we believe will be transformative in many positive ways," he said. "By proposing a business combination with Renault, our spirit is one of finding a common purpose that provides benefits for all our companies, embracing Nissan and Mitsubishi as valued and respected partners."

The comment follows the submission of a formal merger proposal to Renault in the latest twist in the web of partnerships spanning the global auto industry. Renault is a 43% owner of Nissan, while Nissan owns 34% of Mitsubishi. 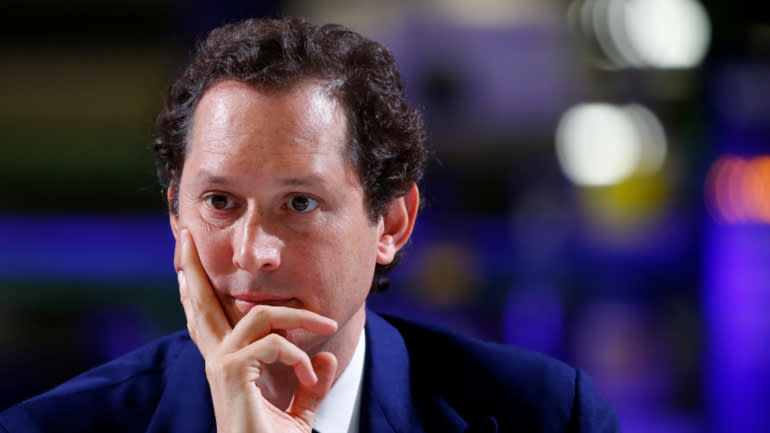 John Elkann, Chairman of Fiat Chrysler Automobiles attends an event in Meyrin near Geneva, Switzerland in April. Elkann told Nikkei that the merger proposal with Renault has the potential to build a global partnership including Nissan.   © Reuters

Renault sounded positive after a board meeting on Monday.

"After careful review of the terms of FCA's friendly proposal, the Board of Directors decided to study with interest the opportunity of such a business combination," the company said.

According to the merger proposal announced by FCA, the combined FCA-Renault business would be 50% owned by FCA shareholders and 50% by those of Renault, and create synergies worth more than 5 billion euros ($5.6 billion) a year. It proposes a board initially made up of 11 members, with four members each for both FCA and Renault, and one from Renault alliance partner Nissan Motor.

"The proposed combination would create a global automaker, pre-eminent in terms of revenue, volumes, profitability and technology," FCA said. "The combined business would sell approximately 8.7 million vehicles annually ... and would have a broader and more balanced global presence than either company on a stand-alone basis," the statement said.

The merger would not involve any plant closures and would enable more capital efficient investment in common global vehicle platforms and technologies, FCA added.

Renault CEO Thierry Bollore arrived at Narita Airport, outside Tokyo, on Tuesday morning to attend a regular meeting of alliance executives, which will be held on Wednesday. Asked whether he will lay out the merger proposal to Nissan and Mitsubishi Motors executives, Bollore said he will discuss "all possibilities," as usual.

He said he was in Japan for a regular meeting among alliance executives and declined to give details regarding merger talks with FCA or Renault's proposal to merge with Nissan.

FCA, Renault, Nissan and Mitsubishi together would have combined sales of 15 million autos a year. Nissan's Saikawa has so far declined to comment on the mooted deal. "I'm open to any forward-looking discussions to strengthen the alliance, Saikawa told reporters on Monday.

He added that the top management of Renault, Nissan and Mitsubishi will meet in Yokohama, southwest of Tokyo, later this week, and that he intends "to exchange opinions openly and have a constructive dialogue."

Asked by reporters whether he was notified of the merger proposal, Saikawa was coy, saying, "I can't tell you, but I will tell you when I can."

The French automaker owns 43% of Nissan, while the Japanese company holds only a 15% nonvoting stake in Renault. Nissan so far has rebuffed its French partner's push to tighten their partnership, believing it makes outsize contributions to the alliance.

If the envisioned FCA merger happens, Renault shares owned by Nissan would be replaced by new Renault-FCA shares. Nissan's ownership ratio would be halved to 7.5%.

At the same time, since the new headquarters would be in the Netherlands, France's company laws would not apply to Nissan. The Japanese automaker is expected to be entitled to voting rights through the new Renault-FCA shares, in accordance with the ownership ratio.

Analysts were divided about the prospects for the partnership.

Masamitsu Oki, chief portfolio manager at Fivestar Asset Management, said the proposal could benefit Nissan since FCA is likely to prevent Renault or the French government from taking over the Japanese automaker.

But Christopher Richter, auto analyst at CLSA, had doubts.

The proposed arrangement would diminish Nissan's voice within the alliance, even though its strong presence in China -- the world's largest auto market -- would be vital to both Renault and FCA, neither of which has a large presence there, he said. There is already significant overlap between FCA and Nissan in the North American market.

"It would create a lot of uncertainty about what the role of Nissan is in this alliance," Richter said. "I think [FCA and Renault] need Nissan. The question is whether this will drive Nissan away (from the alliance) or create more friction."

Both Renault and FCA have roots in Europe and their merger would provide the scale needed to raise profit margins and invest in the development of self-driving and electric cars.

FCA, the maker of Jeep, Maserati and Alfa Romeo cars, sold 4.84 million vehicles worldwide last year, compared with Renault's 3.88 million autos. It relies heavily on sales in North America, through its Chrysler unit. A merger with Renault, which makes most of its money in Europe, would complement both carmakers geographically. FCA could also use the deal to forge a closer relationship with Nissan and Mitsubishi, helping it make further inroads in Asia, where it has a limited presence.

A merger also would benefit both carmakers in terms of production and investment in new areas such as artificial intelligence and electric vehicles.

The development of connected, autonomous, shared and electric cars, which are considered keys to the industry's future, is extremely capital intensive. Automakers are increasingly pairing up to eliminate overlapping investments.