'Fifty-six wins, zero losses': The secrets of an M&A maestro

Nidec's boss writes to target companies, then waits ... and waits TOKYO -- At the end of each year, as Japanese sit down to write New Year's cards to friends and family, Shigenobu Nagamori is busy with a different sort of correspondence. The chairman and president of industrial motor maker Nidec writes several dozen letters to the top executives of overseas companies he is targeting for acquisition.

"If you are ever willing to sell your company, please let me know," he writes with characteristic courtesy (which belies his steely tough reputation). The executives usually reply that they have no intention of selling for now, but will inform him if things change.

Again and again, Nagamori repeats his post Christmas ritual. And sometimes, years after the first overture, the executives really do have a change of heart.

"Buying companies demands patience," the 73-year old Nagamori said. "You have no idea how long it can take."

Born in Kyoto, Japan's ancient capital, as the youngest of six siblings, Nagamori's calm-but-dogged approach may hold lessons for other Japanese companies on the look out for acquisitions to boost growth.

In the past, corporate Japan generally favored organic expansion -- internal efforts to boost output and sales. But mergers and acquisitions are increasingly seen as the way to go, even though most seem to have a habit of ending in failure.

The poster child of this would be Toshiba's purchase of U.S. nuclear energy company Westinghouse Electric, which turned into an expensive curse for the Japanese conglomerate. Japan Post Holdings has struggled with overseas acquisitions, too.

Buyer's remorse is not a problem for Nagamori. Nidec is known as a prolific acquirer of companies, having closed a total of 56 deals at home and abroad. The chairman sums up his record with pithy understatement: "Fifty six wins, zero losses. All were successful." "Want to take the day off? Why not quit?" is one of Nagamori's famous sayings. (Photo by Maho Obata)

Nidec started out as a producer of small precision motors in 1973. The Kyoto-based company is now adapting itself to rising demand for motors in products such as electric vehicles, robots, energy-saving appliances and drones.

Patience, it seems, pays off. Nagamori reckons it has taken an average of five years to complete Nidec's acquisitions, starting with those year-end letters. Sometimes the wait has been far longer.

"The longest it took until the target became interested in selling was 16 years," he said. 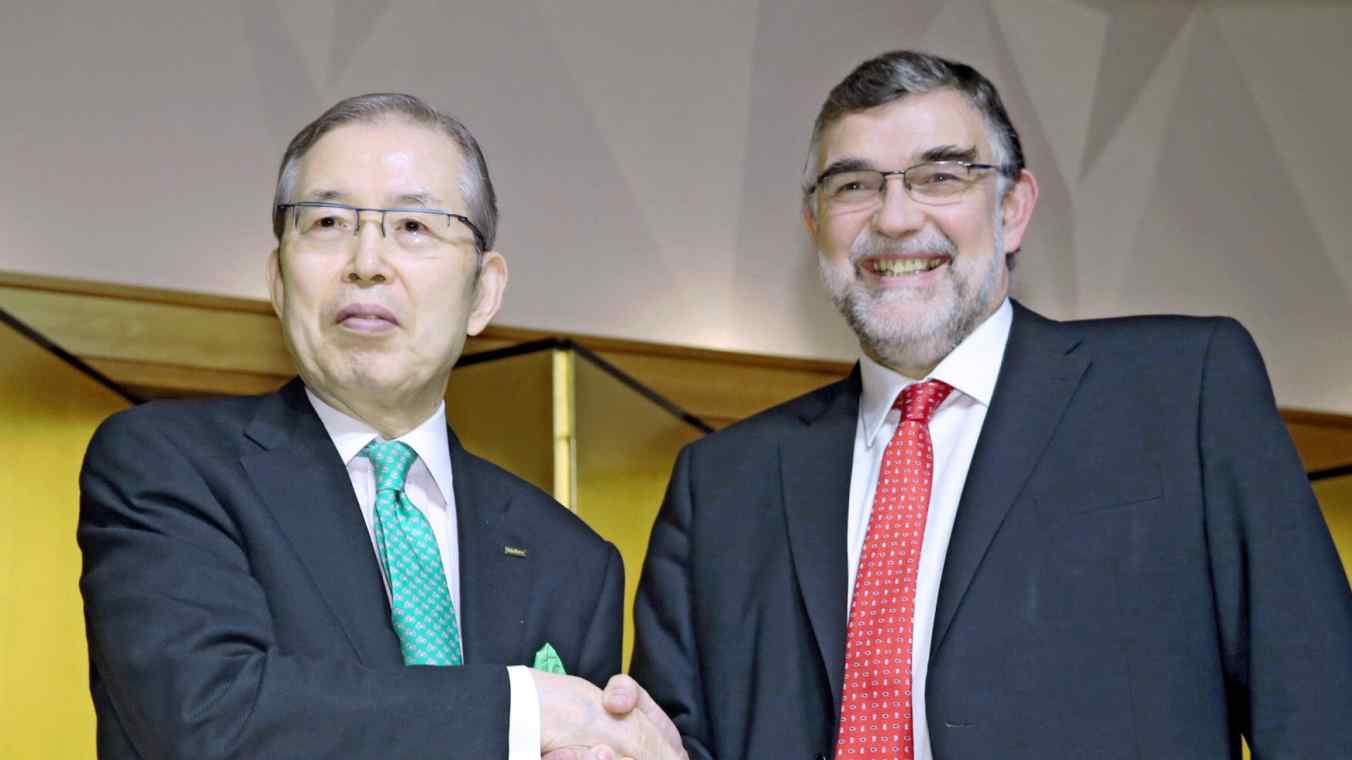 Japan's Nidec to bring acquisitions' R&D under one roof

It is often said that buying another company is like buying time -- you speed up your growth by acquiring the target's workers, equipment, technology and brand in one fell swoop. Yet Nagamori prefers to bide time. Investment banks approach him with potential deals, but he refuses to make impulsive moves.

"They tell me, 'You'll regret it later if you don't buy it now,' but it's just their sales pitch," he said. "I've never had regrets."

In past interviews with The Nikkei, Nagamori has said there are three reasons why he does not fail. "Don't overpay, don't buy what you don't need and always create synergies with your mainstream business." Nagamori is proud that he has not laid off anybody in the companies he has acquired and that none of the 56 companies is losing money.

"I would never buy a hotel for instance," he said about synergies. Nidec creates motors that operate car windows, car wipers and makes air conditioners run efficiently. "If you compare to distances, I buy companies to which I can go to by small boats or by foot. The common mistake is to buy companies to which you can only go to by planes and big ships."

Less than 10% of overseas purchases by Japanese companies have been successful, if success is defined as achieving profit growth from the deals, according to Shigeru Matsumoto, an M&A expert.

Matsumoto, an associate professor at Doshisha University's Graduate School of Business in Kyoto, explained that many companies find they do not know what to do with their acquisitions and eventually sell them, just as Toshiba did with Westinghouse. Otherwise, they continue to hold assets that contribute nothing to their profits.

Cultural and language barriers, slow decision-making and different views about executive pay are among the oft-cited causes of problems.

Sony's history of acquisitions is instructive.

The music division remains a cash cow to this day, while the movie business has twice faced serious asset impairments and continues to struggle.

Kenichiro Yoshida, Sony's executive deputy president and chief financial officer, said the difference comes down to Sony's prior experience in each field.

"In the case of music, we had a record company in Japan before we made the purchase, so we had some experience in the business," Yoshida said. "But in the case of films, we dived head-first into an area in which we had no experience." SoftBank Group Chairman and CEO Masayoshi Son explains about his group's earnings in Tokyo in November 2017. (Photo by Tomoki Mera)

Patience, persistence and preparation, the three Ps, are key to carrying out a successful acquisition. Companies that strike deals on a whim do so at their peril. "You can't go into a M&A negotiation desperate to make a deal, " Nidec's Nagamori insists.

Nagamori, whose sayings include: "Want to take the day off? Why not quit?" until recently served on the board of telecommunication giant SoftBank, run by the unstoppable entrepreneur Masayoshi Son. Tadashi Yanai, the president of Fast Retailing that operates casual clothes chain Uniqlo also serves on the board. Son, Yanai and Nagamori are known as Japan's "three big talkers."

"Son-san is the biggest talker of us all," Nagamori laughs. Son's $93 billion SoftBank Vision Fund and his ideas for sequels even larger are "beyond my imagination," Nagamori said.

"But if you ask which company will be present 100 years from now, it will be mine."