For SoftBank chief Son, all the world's a platform TOKYO -- SoftBank Group's Vision Fund is best known for investing in high-tech fields, such as self-driving and robotics startups, but it also puts money into retailers and consumer-facing companies to create synergies.

Chairman and CEO Masayoshi Son, who has ambitions to turn SoftBank into an online "platform" that brings buyers and sellers together, appears to be placing priority on creating a fusion between online and bricks-and-mortar stores.

"Our $2.5 billion investment in Flipkart has swelled to $4 billion in six months," Son said, referring to India's largest e-commerce company at an earnings briefing in May. SoftBank also bought a stake in India’s third-largest online retailer, Snapdeal. The plan was to merge Flipkart and Snapdeal to create a strong challenger to U.S. e-commerce leader Amazon.com.

The merger talks broke down. Top U.S. bricks-and-mortar retailer Walmart then stepped in, announcing that it would buy the Flipkart stake. SoftBank has sold its interest in Flipkart and is looking for its next bet.

SoftBank is no stranger to consumer-oriented companies. It has stakes in U.S. sports e-commerce company Fanatics and German used-car sales portal Auto1 Group through its Vision Fund.

In addition to Fanatics, which also has bricks-and-mortar stores, many of the companies the fund invests in aim to grow by combining their online and offline operations. Son has used SoftBank's earnings briefings to preach the virtues of this business model.

SoftBank Group’s e-commerce investment dates back to its bet in 2000 on China's Alibaba Group Holding, in which the Japanese company still has a nearly 30% stake. Alibaba has grown by providing online shopping and smartphone payments. SoftBank's 2 billion yen investment ($20 million at the time) in 2000 is now worth over 10 trillion yen, more than 5,000 times as much.

The runaway success of Alibaba has lifted SoftBank's internal rate of return over the past 18 years to 44%. Son has invested in a number of promising high-tech companies as part of his long-standing ambition to turn SoftBank into a platform along the lines of Amazon and Google. In recent years, it has tapped companies already in its portfolio for information on new investment targets.

In February, the unit and Chinese ride-sharing company Didi Chuxing announced plans for a venture to offer ride-hailing to the Japanese taxi industry. Because ride-sharing is basically prohibited in Japan, the venture will focus on taxi dispatch services.

It will use demand forecasting and other systems developed in China to make the service more efficient and convenient. Son envisions the venture using technology to predict traffic congestion, sending taxis to the right place at the right time.

SoftBank may also introduce its German used-car sales portal Auto1 to Indian ride-sharing company Ola so that they can discuss possible tie-ups.

Online grocery delivery startup Grofers India and U.S. food delivery company DoorDash are also recipients of SoftBank cash. The company also hopes to team up with Uber Technologies, in which it has a 15% stake, to offer a new service, together with the Uber Eats food delivery service.

In February, SoftBank's mobile unit set up a joint venture with Okayama-based casual clothing company Stripe International to create an online shopping site called Stripe Department. Customers are able to see 60,000 items from about 600 apparel brands on the site. It mainly targets customers in their late-30s and 40s to differentiate itself from Start Today’s Zozotown marketplace, which is aimed at younger shoppers. 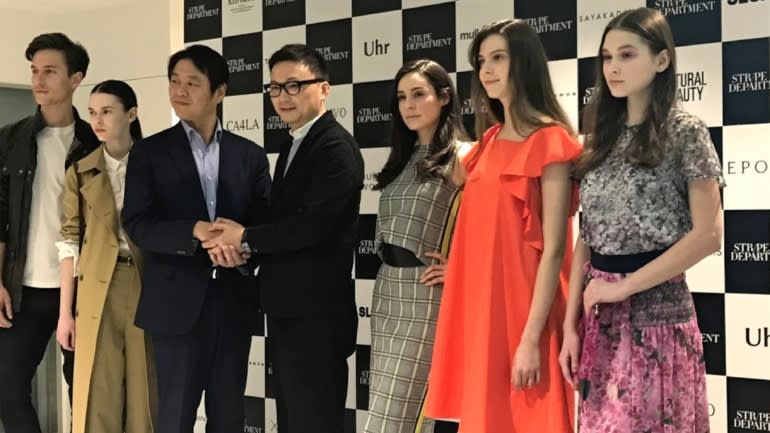 The unit will help Stripe Department by providing digital ads and a chat service that makes use of artificial intelligence. Last autumn, J.Score, a 50-50 joint venture between the unit and Mizuho Bank, launched a loan service that uses AI to assess borrowers' creditworthiness.

Yahoo Japan offers a model for SoftBank’s fusion of internet and bricks-and-mortar stores. SoftBank is planning to have Yahoo Japan and its mobile unit form joint ventures with companies that the Vision Fund is invested in to launch new services in Japan.

Yahoo Japan, which is close to internet users, will play a key role. It has overtaken its U.S. namesake by offering a wide range of services, including shopping, finance and travel. Over the past few years, however, the company’s earnings have been sluggish in the face of fierce competition at home and overseas.

SoftBank's mobile unit is considering partnering with Yahoo Japan and Japanese retailer Aeon to create online shopping sites and operate offline stores. The parent company may buy retailers and service companies, wholly or in part, that have bricks-and-mortar stores via Yahoo Japan.