The acquisition, which is expected to cost the Japanese imaging company around 170 billion yen ($1.55 billion), is aimed at giving Fujifilm the scale to compete with the top three global players: Germany's Siemens, General Electric of the U.S. and Dutch manufacturer Philips.

Fujifilm has been beefing up its medical equipment business, particularly endoscopy and X-ray imaging. Now it is turning its attention to the CT scanners, MRI devices and ultrasound devices that Hitachi specializes in.

Fujifilm and Hitachi both plan to hold board meetings and vote on the proposed deal on Wednesday.

According to U.K. market researcher Evaluate, the top three medical imaging companies hold a combined 65% share of the global market. In 2016, Fujifilm offered to buy Toshiba Medical Systems, but was beaten out by Japanese rival Canon, which won the exclusive right to negotiate a buyout and successfully completed the acquisition.

As of last year, Fujifilm held a 5.5% share of the worldwide diagnostic imaging market. The purchase of Hitachi's diagnostic imaging operations, which are believed to account for another 2.9% of the market, will bring Fujifilm close to Canon's 9.5% share. 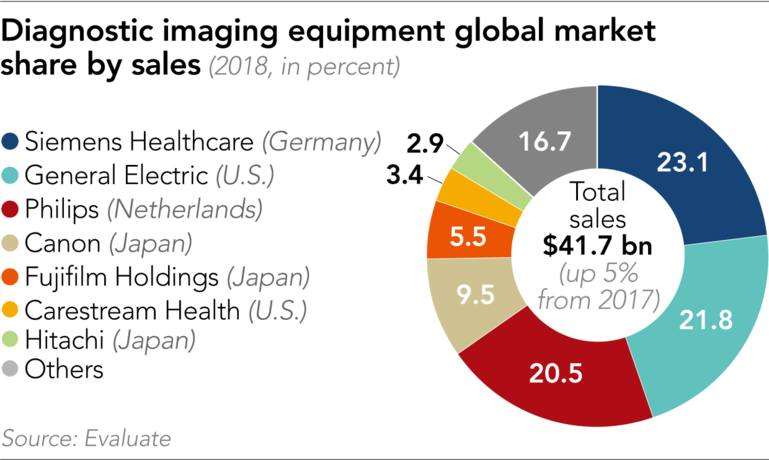 Fujifilm on Dec. 5 announced the purchase of the 25% stake in Fuji Xerox owned by Xerox of the U.S., saying it will turn the unit into a wholly owned subsidiary. It also revealed plans to develop a new diagnostic imaging product that combines Fujifilm's image processing technology with language processing capabilities developed by Fuji Xerox.

Hitachi is reviewing its business portfolio to refocus on growth areas. With the health care segment delivering an operating margin of just 2.4% for the year ended March, the company began considering selling the business.