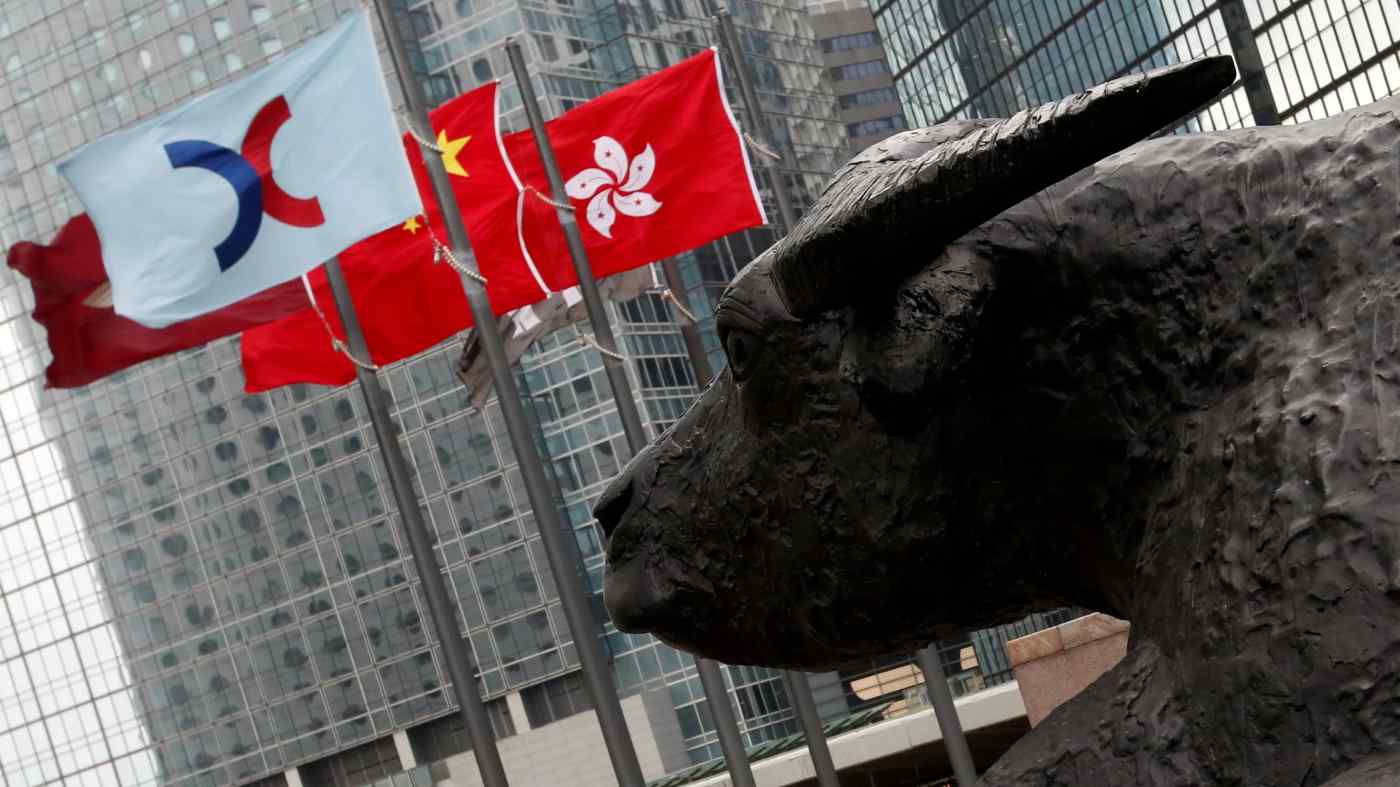 HONG KONG -- Shares in Hong Kong Exchanges & Clearing fell on Thursday the day after it made an unexpected 29.6 billion pound ($36.5 billion) offer to buy the London Stock Exchange Group, in a surprise bid for the British institution.

LSEG is leaning toward rejecting the HKEX bid, the Financial Times reported.

The operator of the Hong Kong Stock Exchange said in a statement on its website that for every LSEG share, it has offered 20.45 pounds in cash and 2.495 newly issued HKEX shares, valuing it at 83.61 pounds a share, or a 23% premium to its closing price on Tuesday. LSEG shares were up 5.7% at 71.92 pounds in morning trading.

"Bringing HKEX and LSEG together will redefine global capital markets for decades to come," Charles Li Xiaojia, chief executive of HKEX, said in the statement. "Together, we will connect East and West, be more diversified, and we will be able to offer customers greater innovation, risk management and trading opportunities."

HKEX said it plans to finance the deal through a combination of existing cash and new credit facilities. In midday trading on Thursday, its shares were down 1% amid a weakening broader market.

Li denied the offer had anything to do with the uncertainty emanating from Britain's impending exit from the European Union or the 14 straight weeks of protests in Hong Kong that has hurt its economy and dented confidence.

Li also denied the proposal was an attempt to reduce the exchange's reliance on China and said fears of Beijing's influence in London's financial markets were unfounded.

HKEX said it intended to seek the LSEG board's recommendation for the offer and implement the proposed transaction by means of a "scheme of arrangement." However, it said that it reserved the right to carry out the proposal by way of a takeover offer.

The Hong Kong exchange operator also said the offer would only go ahead if the LSEG's proposed takeover of Refinitiv does not proceed.

The LSEG said in a statement on its website that it will consider the "unsolicited, preliminary and highly conditional proposal" and that it would make a further announcement in "due course."

In the same statement it said that it "remains committed to and continues to make good progress on its proposed acquisition of Refinitiv. A circular is expected to be posted to LSEG shareholders in November 2019 to seek their approval of the transaction."

HKEX said the two exchanges had little overlap and didn't expect any regulatory hurdle for a transaction.

Castor Pang, head of research at Core Pacific Yamaichi International in Hong Kong, said getting the nod from the U.K.'s antitrust authority is doubtful as HKEX already controls the London Metal Exchange through a 1.4 billion pound acquisition in 2012.

"People might fear that the [London] financial market would be subjected to foreign influence," if the new deal does go ahead, Pang said. "Stock exchanges are strategic organizations. It is not just a place for making money but also for supporting the economic development of a region."

HKEX's Li said the exchange operator had long looked at its London-based counterpart and decided to make a move before it was too late as LSEG was pushing on with its own acquisition.

"We have been admiring them for a long time and we have wanted to do this for a long time but they are now engaged with another person," Li said in a media conference call. For LSEG's board "it is very difficult for them to really talk to us in a meaningful way. We know we were late. We don't want to be late again.

He said the proposal was not a "hostile transaction" but an attempt by HKEX to give all the stakeholders an opportunity to evaluate the"compelling" offer and conclude it.

While LSEG's Refinitiv deal was a bet on data dominance and analytics, the HKEX offer attempts to create a global trading powerhouse across equities, commodities, derivatives and clearing in financial centers of London and Hong Kong.

"The London market is the world's most competitive, the most confident and the most embracing capital market in good times and in bad times," he said. "We see no reason why any of the temporary difficulties [or] challenges should be the obstacle of some great things to happen. The U.K. and the city of London is always going to be strong even post Europe."

He said the proposal is in line with HKEX's plan unveiled earlier this year that had three major themes: China anchored, globally connected and technology empowered.

There is a significant overlap of shareholders between the two companies, and these investors would see "synergies" from the transaction, HKEX said.

HKEX plans to extract cost savings by connecting the two markets and expanding capital flows between China, Asia and the rest of the world as the yuan emerges as an international reserve currency. In the short term, it expects to reduce costs by applying LSEG's technology to its own systems that are now being upgraded.