TOKYO -- Japanese trading house Itochu announced on Wednesday it will take full ownership of the FamilyMart convenience store chain, raising its stake from just over 50% through a tender offer.

Itochu and FamilyMart will deepen their ties in procurement of food and consumer goods, as well as in areas such as customer data analysis and digital payments.

Itochu, together with its group companies, owned 50.1% of FamilyMart as of the end of February. The tender offer price is 2,300 yen per share, or a 31% premium over the closing price of 1,754 yen on Wednesday.

Following the completion of the deal, Itochu will offer about 5% of the shares to Norinchukin Bank and Zen-Noh, or the National Federation of Agricultural Cooperative Associations, for 57 billion yen to strengthen ties with the agricultural sector in Japan.

FamilyMart had 16,613 stores in Japan as of end of May and serves more than 10 million customers a day. But the chain is struggling with declining profit due to the new coronavirus outbreak.

"We need to improve our service by working more closely with Itochu." This has become a constant refrain for Takashi Sawada, FamilyMart's president, as the company's performance has slumped during the pandemic. Nowhere is its predicament more evident than in the share price. Wednesday's closing price of 1,754 yen is less than half its 10-year peak of 4,027 yen, marked in November 2018. 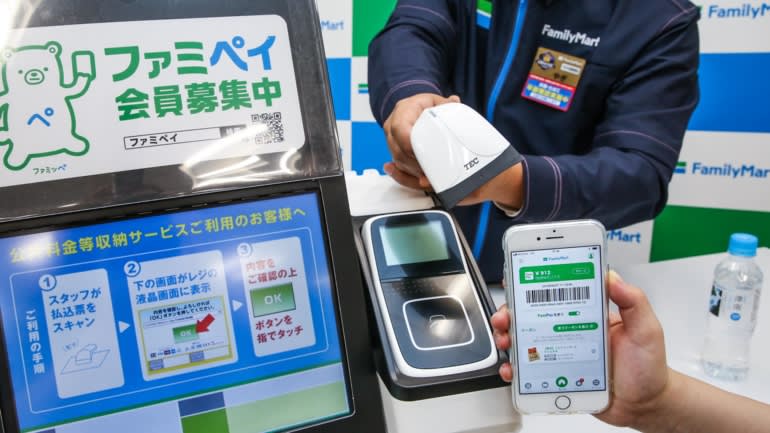 FamilyMart has been trying to develop new lines of business, but few have met with success other than its cashless payment app. (Photo by Manami Yamada)

Itochu wants to make greater use of FamilyMart's procurement network, both domestically and overseas. FamilyMart's abundant customer data will allow the companies to develop new businesses that go beyond conventional retailing.

Seven-Eleven has created popular private-label items. Lawson has built a reputation for sweets. FamilyMart, meanwhile, has been trying to develop new lines of business around its convenience stores. So far, however, few initiatives have taken off, other than its cashless payment app.

Itochu believes it has the resources to turn FamilyMart around. The trading house operates a broad range of businesses that it can draw on. In particular, it has expertise in electronic transactions and data analysis, which it believes can be deployed to strengthen FamilyMart's convenience store services.

Itochu has positioned FamilyMart as an equity method affiliate since 1998, and increased its stake in 2018 to turn it into a subsidiary.

FamilyMart operated 8,032 stores outside Japan as of May. Earlier that month, the company transferred its 49% stake in its Thai joint venture to the local partner and the country's biggest retailer, Central Retail, while retaining the licensing rights.

FamilyMart had about 1,000 stores in Thailand and concluded that it was better to give the local partner full control over operations to expand the business faster. In Thailand, Seven-Eleven has a bigger presence with some 11,000 stores operated through Charoen Pokphand, a Thai conglomerate.

The Japanese convenience store market is almost totally dominated by FamilyMart, Seven-Eleven Japan and Lawson. But store saturation and what appears to be a peak in sales have cast doubts on market growth.

Trading houses, on the other hand, are enhancing their retail businesses to make profits without being dependent on resources. Mitsubishi Corp. in 2017 made Lawson a subsidiary, while Mitsui & Co. is investing in Seven & i Holdings, the parent company of Seven-Eleven Japan.