The venture, in which Julius Baer will take a 40% stake, will focus on the growing number of wealthy Thais who want "international diversified advice" on their asset management, Julius Baer CEO Bernhard Hodler said on Thursday.

This will mark only the second time in the bank's 128-year history that it has formed a joint venture with another financial institution. The previous tie-up -- which no longer exists -- was set up 25 years ago in Italy.

Swiss rival Lombard Odier signed a strategic partnership with Thailand's fourth-largest lender Kasikornbank in 2014, but Hodler described that as "more of a product-distribution cooperation" and said his bank was looking "to do something else."

The joint venture, to be incorporated in Thailand with an initial capitalization of 1.8 billion baht ($57 million), will be subject to approval by the Bank of Thailand and the local Securities and Exchange Commission. It is expected to be established in late 2018 or early 2019. 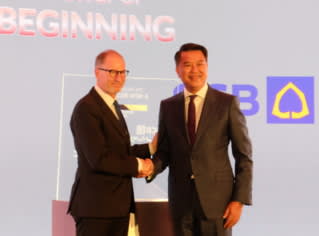 In the first five years, the venture will aim to reach assets under management of $30 billion, according to SCB President Arthid Nanthawithaya, with a minimum asset requirement of 100 million baht.

The venture will focus on Thailand, with around 10 to 20 relationship managers to be hired in the initial stage. "If we find success, why not expand into CLMV countries [Cambodia, Laos, Myanmar and Vietnam]?" said Arthid.

While SCB will be Julius Baer's sole partner in Thailand, Hodler said it will "keep eyes wide open" in other markets for opportunities including mergers and acquisitions.

Since Julius Baer first entered the region in 2006, Asia has grown to account for one-quarter of its total assets under management of 388 billion Swiss francs ($410 billion) as of the end of 2017. The bank operates in over 25 countries.

"We see great potential in Asia," Hodler said. The region is one of the bank's fastest growing, along with Latin America, where it recently announced the acquisition of a Brazilian peer. Siam Commercial to shut 750 branches by 2020 but no layoffs

"Thailand has more [wealthy] people," Hodler observed. "The population of high-net-worth individuals is growing, and the need for international advice is increasing."

According to SCB, Thailand's wealth management market has grown to around $300 billion, while the population of high-net worth individuals has expanded by double digits the past few years.

But it is difficult for an international bank to penetrate this market, Hodler said. High-net-worth individuals, many of whom control family-owned businesses, manage their assets under local Thai banks.

"It was a miracle when we got a call [from SCB to form the partnership]," Hodler said. A "joint venture is the best way to exploit this very attractive market."