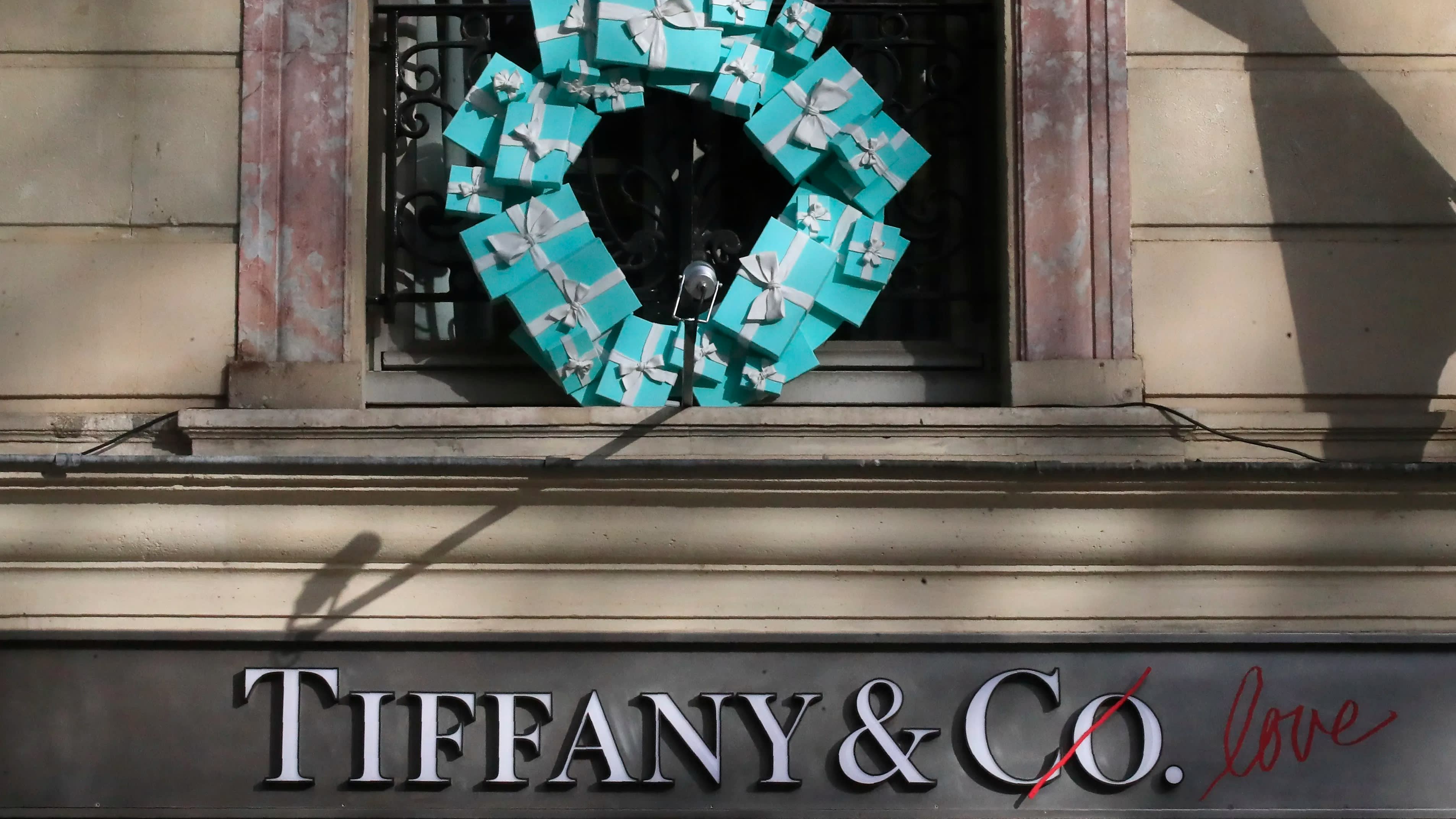 A christmas decoration hangs above the Tiffany jeweler shop logo at the Champs Elysees avenue in Paris on Monday.   © AP

PARIS (Reuters) -- Louis Vuitton owner LVMH has agreed to buy Tiffany for $16.2 billion in its biggest acquisition yet, as the French luxury goods maker bets it can restore the U.S. jeweler's luster by investing in stores and new collections.

The $135-per share cash deal will boost LVMH's smallest business, the jewelry and watch division that is already home to Bulgari and Tag Heuer, help it expand in one of the fastest-growing industry sections and grow its U.S. presence.

It will have challenges to overcome too, as spending patterns shift and Chinese shoppers retreat from the United States to buy more at home, one of the side effects of a Beijing-Washington trade war that has weighed on Tiffany.

And the U.S. the jeweler is still in turnaround mode as it tries to rejuvenate its image and lure shoppers online.

But the New York-based brand, founded in 1837 and known for its signature robin's egg blue boxes, still has a resonance as the go-to purveyor of engagement rings only a handful of rivals can match, such as Richemont-owned Cartier.

"It's an American icon, which is now going to become a little French too," LVMH's Chairman and Chief Executive Arnault told Reuters in an interview.

"There are some extraordinary things about Tiffany, like the color. We're now the owners of a color -- that's a very rare thing."

The purchase crowns a string of acquisitions through which Arnault, France's richest man, has built up his conglomerate, including fashion brands like Christian Dior, wineries, and beauty retailers like Sephora.

Not all are profitable to the same degree -- the group is still trying to revive its Marc Jacobs label -- but Arnault cited the firm's 2011 acquisition of Bulgari as a model for Tiffany.

"I'm not saying we can do that (with Tiffany), but I think the potential is there," he added, saying the deal, to be financed with bond issues, would add 500 million to 600 million euros to LVMH operating profits in the first 12 month.

LVMH does not break out earnings for individual brands. The deal is expected to close in mid-2020.

Tiffany said in a joint statement with LVMH that its board of directors recommended shareholders approve the transaction.

The $135 per share bid is marks 7.5% premium over Tiffany's closing share price on Friday, and is more than 50% above where it stood before LVMH's interest emerged.

LVMH's official courtship of Tiffany lasted about five weeks after a first approach of $120 per share in mid October.

But LVMH has had eyes on the brand, also made famous by the 1961 movie "Breakfast at Tiffany's" starring Audrey Hepburn, for years, sources familiar with the situation said.

Tiffany, which has more than 300 stores worldwide and made almost half of its sales at home last year, has been struggling to win over young shoppers and its success outside of the United States has been uneven.

Like rivals, it is also likely to face a hit from street protests in Hong Kong, which has forced retailers to close stores. Tiffany reports third quarter earnings on Dec. 5.

Competition from lower-priced rivals such as Denmark's Pandora A/S and Signet Jewelers has muddied the waters in recent years, but LVMH is likely to want to position the brand at the higher end of the market, which is more profitable.

"Bernard Arnault will be able to invest massively in repositioning the brand, taking it more upmarket in the United States, and also pushing more in Asia and in Europe," one source close to the transaction said.

Growth in jewelry outpaced that of other luxury businesses such as fashion in 2018, according to consultancy Bain & Co, which forecast comparable sales in the $20 billion global jewelry market were set to grow 7% this year.

"Tiffany's brand equity and the strength of the image of its iconic 1837 Blue Box are more valuable than the current financials suggest," Jefferies analyst Flavio Cereda said in a note published just before the deal was confirmed.

"LVMH can leverage off these to launch a more concerted 'attack' on the Asian millennial market."

Chinese consumers in their 20s and 30s are helping to fuel growth across the luxury goods industry.

LVMH has no short term plans to shake-up management at Tiffany, where ex-Bulgari executive Antonio Bogliolo is now CEO, Arnault said, though he didn't rule out changes in the longer term.