Japan's No. 1 telecom player to work with tech giants on India-Myanmar link The investment, worth around $400 million, will be undertaken with a leading internet content provider such as Google or Facebook. Such companies are big users of communication cables.

In addition to Mumbai and Chennai, the Mist cable will come ashore in Singapore, which is the central hub connecting Asia to the rest of the world. The cable is designed for a maximum transmission speed of 240 terabits per second.

According to NTT Ltd. Director Hajime Miyazaki, the venture aims to speed decision-making on the laying of new cables. Submarine cables are usually financed by consortia of several companies, but the time required to reach a consensus among the investors can slow down the process, Miyazaki said.

NTT's move takes place against a backdrop of a construction boom in submarine cables, which are key to handling rapidly growing internet traffic. According to a report by Submarine Telecoms Forum, global demand for bandwidth is forecast to double every two years for the foreseeable future, due the growth of cloud-based services and technologies such as 5G.

While telecom companies led the previous burst of cable construction in the late 1990s, this time around content providers have been driving new projects. Companies such as Google, Amazon, Facebook and Microsoft used 54% of the total international bandwidth as of 2018, up from less than 10% in 2012, according to market research specialist Telegeography. 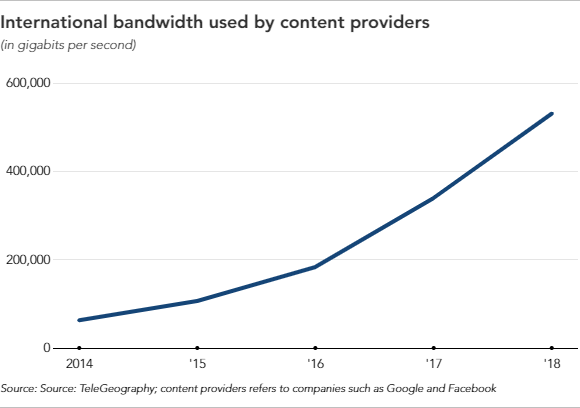 Alan Mauldin, an analyst with Telegeography, said that the latest round of cable-laying is underpinned by solid demand, adding that content providers will continue to invest in different routes. They are "involved in many cables that are not publicly known about. ... I can definitely say there are many coming," he said.

Southeast Asia will be the fastest growing region for co-location data centers over the next five years, according to Cushman & Wakefield, a real estate broker. NTT opened two data centers in India, nearly doubling its server room space the country last year. It is also building new ones.

While content providers have money to invest, hooking the cables up requires government licenses. Companies may benefit from having a track record of engaging successfully with countries on such projects.

Myanmar only has a few undersea cables, which means connection fees are still high despite the growth of the mobile market in the country, NTT's Miyazaki said. Countries are linked by terrestrial cables as well as submarine ones, but those on land are more easily damaged. NTT's joint venture plans to lease its submarine cable capacity to other companies. The cable is expected to begin carrying data in June 2022. Its partner in the venture will own some of the capacity, with the bandwidth available for its own use.

NTT Group has seven cables in Asia. It is working with a consortium of companies, including Amazon, Facebook, Japan's SoftBank Corp. and the Philippines' PLDT to lay another cable, called Jupiter, which is expected to go into service next year.

Other recent projects in the region include Indigo, which was completed this year and paid for by companies such as Google, Telstra of Australia and Singapore Telecommunications. The Southeast-Japan 2 cable is scheduled for completion next year by a consortium comprising China Mobile International, Facebook and KDDI.

Telegeography's Mauldin suggested that Chinese content providers such as Alibaba Group Holding and Tencent Holdings are also adding capacity through Chinese carriers. But he believes there has been no significant increase in Chinese investment, as "they have been doing it for a long time."