MassMutual and DWS deals 'not the end' of acquisition drive TOKYO -- Faced with considerable headwinds, Nippon Life Insurance has been on an 800 billion yen ($7.49 billion) buying spree in a bid to reinforce its status as the leader of Japan's insurance industry.

On Wednesday, it was reported that the company plans to buy into DWS, Deutsche Bank's asset management division. Nippon Life's stake will be less than 10%, but the investment is estimated at tens of billions of yen.

The announcement came less than a week after it announced that it would acquire the Japan unit of U.S. company MassMutual Life Insurance. "This is not the end of our strategy," said Yuji Mikasa, the company's managing executive officer.

These are the latest in a series of investments and acquisitions made since Yoshinobu Tsutsui became company president in 2011, including that of rival Mitsui Life Insurance.

Industry experts are now speculating that Nippon Life may even try to buy MetLife Insurance, the Japanese unit of U.S. insurer MetLife.

Talk of a merger with MassMutual dates back to July 2016, when Nippon Life was approached by the U.S. parent company.

The Mitsui Life deal had been struck in late 2015 and MassMutual was not at the top of Nippon Life's acquisition list. Talks went ahead nonetheless after the target company's strengths, such as retail sales, had been assessed. It has taken just six months to finalize the deal since formal negotiations began.

In addition to over-the-counter sales, asset management has been one of the key areas Nippon Life has focused on when considering acquisitions.

While weighing up an investment in DWS, the company also bought a stake in U.S. asset manager TCW.

The string of investments marks something of a policy shift for the insurer. As Japan's industry leader in the postwar period, Nippon Life was reluctant to form tie-ups. The collapse of the bubble economy in the early '90s and bankruptcies at many life insurers in the 2000s made the company even more cautious.

That changed when Tsutsui came to the helm. Competitors were stunned in 2015 when he declared that the insurer would go on a 1.5 trillion yen spending spree over the next 10 years.

The overall business environment for Japan's life insurers is getting more constrained. It is becoming increasingly difficult to manage funds through Japanese government bonds under the Bank of Japan's negative interest-rate policy.

A number of rivals have also gone on the offensive. In 2010, Dai-ichi Life Holdings became Japan's first life insurer to demutualize and become a stockholder-owned company. In 2014, it acquired U.S. life insurer Protective Life, overtaking Nippon Life in terms of income from premiums and other sources in the fiscal year through March 2015. 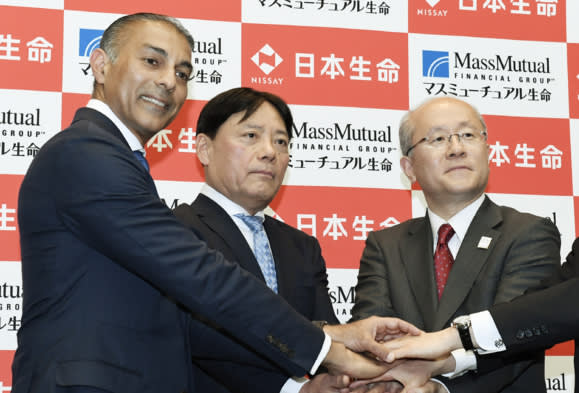 Dai-ichi Life generated just over 30% of its group net profit from its overseas operations and retail sales in fiscal 2016.

The company has now made greater progress in transforming its earnings structure than Nippon Life, thanks to the flexibility it obtained by converting into a stock company.

Nippon Life plans to share expertise with Mitsui Life Insurance through personnel exchanges and mutual supply of insurance products. Eddie Ahmed, President and CEO of MassMutual International, which retains a 14.9% stake in the Japanese unit, has also hinted at the possibility of collaborating in Japan and elsewhere.

Success now rests on how well the company can create synergies with those it has acquired.