OSAKA -- Japan's Panasonic is growing wary of the risks posed by its battery partnership with Tesla, the American electric car maker, which has been eating through capital while production of its mass-market sedan struggles to get off the ground.

Though Panasonic's earnings for the year ended March gave reason for optimism, with both sales and profit increasing, the electric car battery business is showing signs of strain.

Tesla and Panasonic are jointly building the so-called Gigafactory, a vast battery production plant, in the U.S. state of Nevada. But the Osaka-based company appeared cool toward Tesla CEO Elon Musk's announcement in a May 2 earnings call that he expects soon "to announce the location of the Tesla Gigafactory in China" that combines car and battery production facilities.

Plans are "not solidified yet" and "nothing is set in stone," said several Panasonic executives.

The partners are investing up to $5 billion through 2020 in the Nevada Gigafactory, where the American company aims to manufacture 35 gigawatt-hours' worth of Panasonic's electric car batteries per year to power Tesla's vehicles, such as the Model 3 sedan.

Panasonic has shouldered an investment burden of around 200 billion yen ($1.82 billion) and is considering pitching in further. But it intends to "decide based on a frank assessment of the situation," said one executive.

Last July, Tesla launched the Model 3 to much fanfare at a relatively modest price tag of $35,000, but production has been slow to ramp up. An output target of 5,000 units per week has been pushed back to the end of June 2018, and as of the end of March the pace was around 2,200. The delays cut into Panasonic's operating profit by about 20 billion yen in the fiscal year just ended and dragged down the figure for the business division that includes electric car batteries.

Tesla also posted its worst-ever quarterly operating loss for the January-March period, causing some even to question its financial soundness. Musk also ignited a storm of criticism and sent Tesla share prices plunging when he dismissed an analyst's question during the May 2 earnings call by scoffing that "boring bonehead questions are not cool." 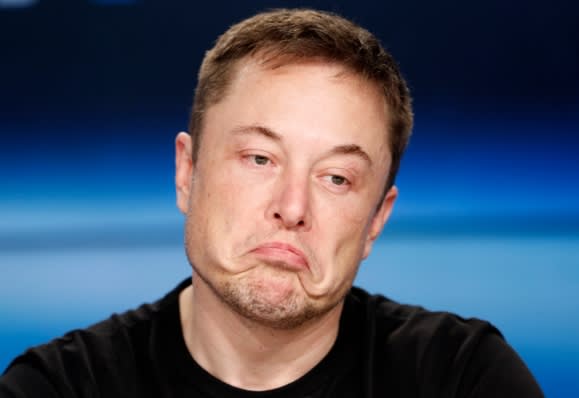 "He's in no position to say something like that," said a Panasonic executive.

Tesla's production has gone through "a speedy setup when viewed from a long-term perspective," Panasonic President Kazuhiro Tsuga said at Thursday's earnings conference.

But the company remains hesitant to commit to further investment with the electric car maker. That caution stems in part from Panasonic's stinging experience with plasma displays, in which it invested about 500 billion yen for building factories and other expenses before the technology ultimately lost out to liquid crystal displays. Tsuga himself pulled the plug on the plasma business.

Panasonic is also gearing up for an investment war with Chinese electric car battery rivals. In particular, Fujian-based Contemporary Amperex Tecnhology -- or CATL -- is spending large sums to rapidly add production capacity, aiming to topple Panasonic by securing business with international automakers on the strength of its low costs.

That presents a pinch for Panasonic: Pouring still more capital into Tesla has its risks, but so does passing up the chance to be the sole supplier for the electric car maker's China operations and potentially giving its rivals a boost.

Also potentially demanding investment is Panasonic's relationship with automaker Toyota Motor, which one Panasonic executive said is intended to become as important a partner as Tesla. Late last year, the companies said they would start exploring joint development of electric vehicle batteries. But Panasonic's battery production capacity is already full, so if the partnership progresses further, it may need to pony up to add more.

Panasonic's interest-bearing debts total around 1 trillion yen, in the same neighborhood as its cash reserves. That leaves it little leeway for investing.