Pioneer was among the first consumer electronics companies to see the potential of the automotive market, but it was unable to put itself at the center of an "ecosystem," as Apple did.
TAKAYUKI KIKUCHI, Nikkei staff writerJanuary 25, 2019 15:54 JST | Japan
CopyCopied

Approval of the deal at an extraordinary shareholder meeting gives the company time to turn itself around. Pioneer plans to delist from the Tokyo Stock Exchange in March, a little more than 57 years after making its trading debut. The Asian fund will spend a total of 102 billion yen ($904 million) to take the company private.

Pioneer President Koichi Moriya apologized for his management decisions at the meeting but still faced criticism from shareholders. The company must now try to get its finances in order while simultaneously adapting to the advent of self-driving cars.

Pioneer was founded in 1938 as a manufacturer of audio equipment. It was a leader in automotive electronics, a precursor to the autonomous driving technology coming on stream now. 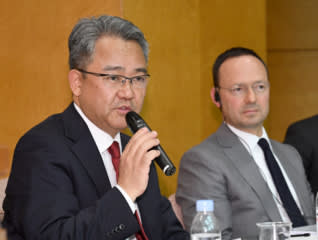 In 1990, Pioneer introduced the world's first car navigation system equipped with GPS. The company developed technology to display the location of the car on a map and show the direction of travel using multiple sensors. It also developed touch-screen technology for car audio and other functions. Over the years it earned a reputation for innovative product design.

But despite being perhaps the first consumer electronics company to recognize the potential of the automotive market, Pioneer has failed to come up with a plan to sustain its growth and did not succeed in creating an "ecosystem" of tightly integrated products and services such as Apple's.

Pioneer has also struggled with high fixed costs, operating plants both in Japan and oversees. Rising software investment costs, coupled with this legacy plant and equipment, made it increasingly difficult for the company to pay for the investments it needed out of its own earnings.

As it struggled to stay afloat, Pioneer was forced to sell off prized assets piecemeal, including its DJ equipment and audio businesses. It opted to focus on automotive electronics. As more cars were equipped with navigation systems, Pioneer began manufacturing on behalf of automakers, winning large orders from Toyota Motor, among others. But that new source of business was insufficient to cover the higher cost of capital investment and software development; the company continued to bleed cash.

While companies in the car electronics segment are under pressure to roll out new products every year, those manufactured on a contract basis take between four and five years to develop. Given the time needed to recoup their investments, manufacturers must have solid finances.

Pioneer has staked its survival on its mapping technology. As autonomous driving technology takes hold, the company wants to sell automakers and others electronic maps and LIDAR -- short for light-detection and ranging -- systems meant to serve the eyes of driverless cars. But generating profits from the fledgling technology will take time.

After delisting and accepting the investment from Baring, Pioneer will seek further growth through "the data solution business using maps," said Moriya.

Pioneer is working with insurers and others to buy additional time, but it is unclear whether the frantic deal making will be enough to bring it into the autonomous driving era where it hopes to thrive.