Qualcomm not the last victim as US-China trade war intensifies Qualcomm's bid might not be the last to founder as Beijing reaches for ways to respond to U.S. President Donald Trump's threats to raise tariffs on virtually all Chinese imports   © Reuters

PALO ALTO, U.S. -- Qualcomm's ambition to become an automotive chipmaker ended in smoke on July 25, after it failed to secure approval from Chinese authorities to take over NXP Semiconductors, becoming another high-profile victim of the Washington-Beijing trade row.

The U.S. chipmaker announced on July 25 that it will drop its $44 billion takeover bid for Dutch automotive chipmaker NXP. China did not veto the bid but remained silent on the deal as the deadline drew near, prompting Qualcomm to pull out.

"I think [we had] very good discussions ... with the regulators worldwide, and in particular in China," Chief Executive Steve Mollenkopf said on Wednesday at an earnings briefing for the April-June quarter. "It was very clear to us that the macro environment was very difficult to get something of this size." The deal had been approved in eight other jurisdictions.

Qualcomm's bid might not be the last to founder as Beijing reaches for ways to respond to U.S. President Donald Trump's threats to raise tariffs on virtually all Chinese imports. Several other major deals involving U.S. companies are also awaiting Chinese regulatory approval.

Officials of aerospace and elevator company United Technologies have already noted the peril facing its $30 billion buyout of Rockwell Collins. Asked at an investment conference on June 14 about whether the trade war might prevent the deal's closing, United Technologies Chief Financial Officer Akhil Johri said, "That is something you always have to think about or worry about."

He described discussions with Chinese regulators up till that point as similar to those the company had had with the EU and U.S. Department of Justice, before adding, "Now, hopefully, nothing escalates to change that."

Nevertheless, on a conference call with analysts on July 24 following further escalation of the trade conflict, United Technologies Chairman and Chief Executive Gregory Hayes said: "We are on track with regulatory approvals. We believe we are down to the final stages of the process and we expect the transaction to close here still in the third quarter." 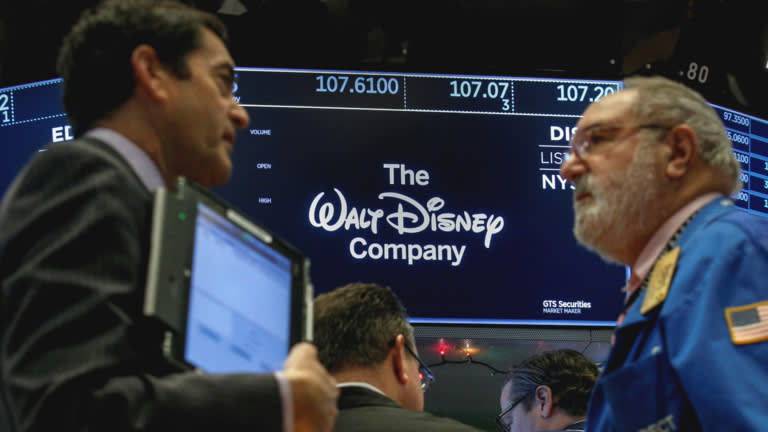 Beijing's hard line stance toward Washington has investors worried about other mega deals such as Walt Disney's bid for the entertainment assets of 21st Century Fox.   © Reuters

According to financial intelligence service Dealreporter, other deals awaiting Chinese approval include Walt Disney Co.'s bid for the entertainment assets of 21st Century Fox, private equity firm Carlyle Group's purchase of Akzo Nobel's chemicals business, and Gebr. Knauf's buyout of building products maker USG. The Fox deal in particular could get Chinese attention given that the company's Fox News Channel has been a crucial supporter of Trump.

"You're just not going to see a lot of deals take place, specifically within the semiconductor industry," said Angelo Zino, an equity analyst with New York-based research company CFRA.

"At the very least, we expect to see deals refrained until we see better dialogue between the two sides," Zino said.

Paul Triolo, practice head for geotechnology at Eurasia Group, called China's decision "unexpected" and said it signals a harder-line approach by Beijing to tensions with Washington. "This would have been a goodwill gesture to President Trump," especially after he "expended significant political capital to save ZTE," Triolo said of the Chinese smartphone company barred earlier this year from purchasing American technology exports.

"Beijing probably concluded that they are not getting anything out of this group in the White House, even if they approved the deal," Triolo said. "This was a political decision."

Zino expects voices on the U.S. side that will call for the reinstatement of the purchase ban on ZTE.

The NXP acquisition was the gamble of a lifetime for Qualcomm. NXP is the world's largest automotive chipmaker, followed by Germany's Infineon Technologies and Japan's Renesas Electronics. Its sales came to $9.3 billion in fiscal 2017.

Qualcomm makes most of its $22.3 billion sales from smartphones and only produces automotive chips for navigation and telecom equipment. The NXP acquisition would have propelled Qualcomm into the major automotive chipmaker league and helped it to expand and diversify from the saturated smartphone market.

The potential of the automotive chip market is huge. Sales of such chips jumped 26% on the year to $38 billion in 2017, according to financial advisory firm Woodside Capital Partners. It also said about $1,000 worth of chips are used to make an electric car, three times the requirement for a traditional-engine vehicle. An increase in the production of electric vehicles and the spread of self-driving technology in the future will spur demand for automotive chips.

As the smartphone market matures, tapping the automotive market was important for Qualcomm to find new fields in which to employ its technological know-how, Mollenkopf said. But the ambitious dream failed to come to fruition, as the Chinese antitrust authority let the July 26 deadline lapse without comment. The tide started turning against Qualcomm in April, following Washington's move to impose sanctions on ZTE.

The failure of this deal brings into focus the impact from Washington's imposition of higher tariffs on Chinese goods. It also points to the intensifying rivalry between the world's two largest economies in the high-tech sectors.

Beijing has pumped vast resources into developing a chipmaking industry under its "Made in China 2025" initiative, in view of the potential of next-generation technologies such as artificial intelligence, internet of things and EVs.

China already controls 10%-15% of the global chipmaking market, but the figure is inflated by output from the mainland China operations of players from other markets, including Taiwan Semiconductor Manufacturing, the world's biggest contract chipmaker, and South Korea's Samsung Electronics.

Excluding those, Chinese chipmakers have a market share of only about 5%, and its technology standards are one or two generations behind, according to Shanghai Industrial Technology Research Institute.

The trade row gives Beijing another reason to remain reticent about the Qualcomm deal, as it strives to get ahead of the U.S. industry. In early July, a Chinese court temporarily barred American semiconductor manufacturer Micron Technology from producing and selling its main products in China, citing violation of patents held by a Taiwanese chipmaker.

That was in the wake of similar action by Trump in March. He vetoed a takeover bid for Qualcomm by Singapore's Broadcom, which has extensive Chinese links, citing national security concerns then. 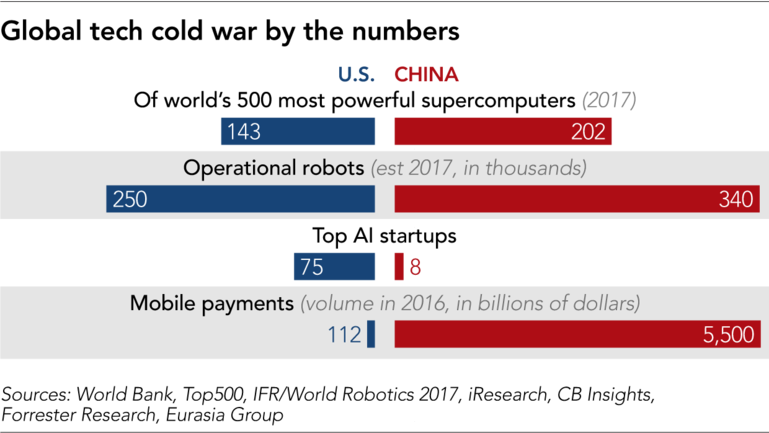 Analysts say that while the U.S. still has the upper hand in know-how and talent, China is on a mission to train up professionals in the field and isn't afraid to poach high-level staff in the industry. Indeed, in some areas, China already has the edge: Of the world's 500 fastest supercomputers in 2017, 202 were operated in China, far higher than the 143 in the U.S., according to American research company Eurasia Group.

Mobile payments in China reached $5.5 trillion in 2016, compared with the mere $112 billion yen in the U.S. Such data point to the prospect that China will outstrip the U.S. in the field of advanced technologies.

Yet, both countries are reliant on each other. Even as the technology cold war between the U.S. and China is set to intensify, analysts point to the dependence on each other's markets. Apple is the biggest American company in China in terms of sales with $45 billion in 2017. Other chipmakers such as Intel, Qualcomm and Micron are also dependent on Chinese clients.

Now with the failure of the Qualcomm-NXP deal, there are worries that tit-for-tat action could escalate. But a lawyer in Beijing who works on merger approvals sounded a word of reason: "U.S. companies will need to navigate through the antitrust process more carefully, in particular for deals involving sensitive industries, but there's no reason to believe that they are necessarily doomed."