TOKYO -- Hitachi said Monday it has reached a deal to acquire the power grid business of Switzerland's ABB for $6.4 billion as the Japanese industrial conglomerate strives to build up its overseas presence in a market poised for rapid growth.

"This deal shows the way forward for Hitachi as we aim to become a truly global company," Toshiaki Higashihara, president and CEO of Hitachi, told reporters on Monday.

The Hitachi chief called the acquisition "a fine purchase" despite the hefty price tag, citing ABB's profitable power grid operations and the "major significance" of buying a leading global business.

Higashihara pointed out that about 40% of ABB's business is in Asia. "In emerging countries in Asia and other regions, infrastructure has yet to be developed," he said, adding that "there is great demand for constructing power grids." Hitachi expects strong demand in India, Thailand and other emerging Asian economies.

Hitachi's board last week confirmed plans to move forward with the deal, which would be the Japanese industrial conglomerate's largest ever. 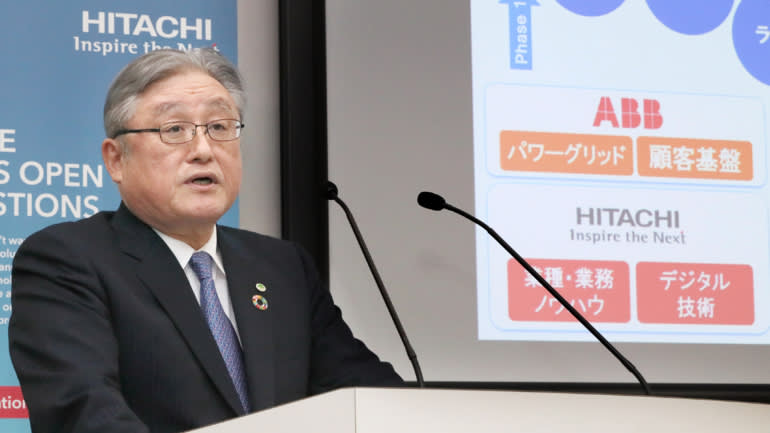 Hitachi President and CEO Toshiaki Higashihara speaks during a press conference in Tokyo on Dec. 17. (Photo by Kei Higuchi)

While Higashihara pointed to the growth potential of the business, it was the presence of a formidable rival that pushed Hitachi to sign the $6.4 billion contract.

In November, while Hitachi was locked in intense talks with ABB, word emerged that the Swiss company was also in talks with State Grid Corp. of China over the possible sale of its power grid business.

State Grid plays a key role in China's Belt and Road infrastructure initiative. It has built a global profile through investments in Italian and Portuguese players, and last year it made Brazil's CPFL Energia a subsidiary.

The German government blocked it from taking a 20% stake in power grid operator 50Hertz in an effort to protect domestic infrastructure. From Hitachi's viewpoint, a State Grid purchase of the ABB power operations would have cut off a viable means of overseas growth.

The ABB purchase, first reported on by Nikkei last week, reflects Hitachi's aims to combine strengths in power generation and information technology, at a time when rivals like General Electric are shifting out of the energy business amid headwinds for nuclear and fossil-fuel sources.

The deal would make Hitachi the world's second-largest heavy electrical equipment maker by revenue, behind only GE, as well as the biggest operator of power grid systems. But it comes with hurdles, such as pitting the Japanese company against global heavyweights like Siemens and France's Schneider Electric that have a head start in the power distribution business.

The plans are for ABB to spin the unit off into a separate company. Hitachi aims to hold a stake of up to 80.1% in the newly spun-off company in stages, and turn it into a wholly owned subsidiary after four years. The move is aimed at reducing the risk from changes in the business environment.

ABB CEO Ulrich Spiesshofer on Monday said one reason for the sale was that orders fluctuate widely in the power grid business.

Hitachi's power and energy operations logged sales of 450.9 billion yen ($3.99 billion) for the fiscal year ended March 31, but its operating profit margin came to less than 6%. The division is highly diverse, spanning nuclear, fossil-fuel and renewable energy generation, as well as transmission and distribution systems, but it relies on the Japanese market for more than 90% of its business.

Hitachi aims to raise its group operating profit margin by about 2 percentage points to 10% by fiscal 2021 through acquisitions like the ABB deal, as well as by merging and culling some of its roughly 900 group companies inside and outside Japan.

Nikkei staff writers Yuichi Shiga in Tokyo and Kosei Fukao in Frankfurt contributed to this article.