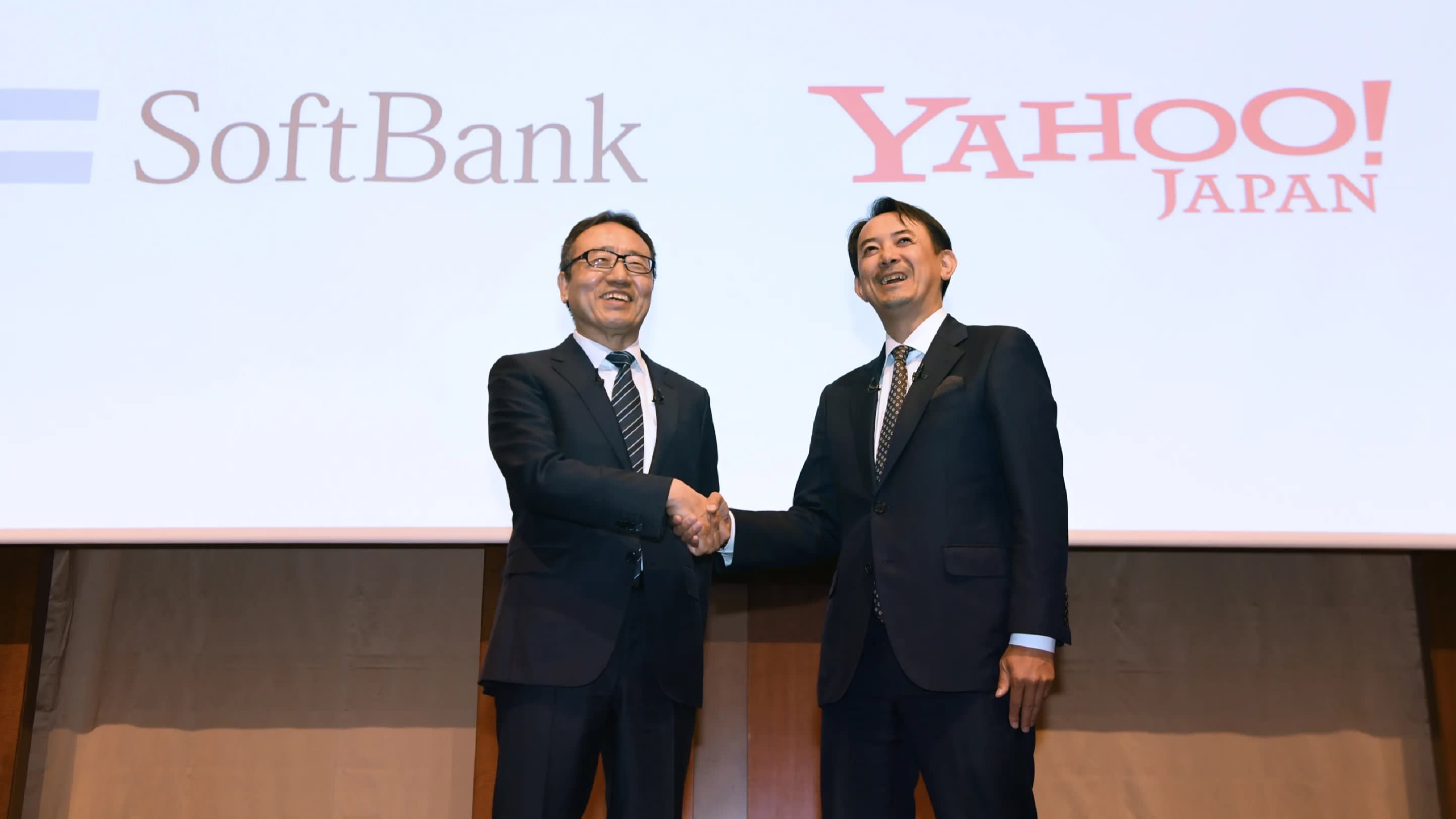 This fiscal year, SoftBank Corp. expects operating profit to grow to 890 billion yen, owing partly to the Yahoo deal, which would make the internet company a consolidated subsidiary in June. But the forecast represents just a 3% rise from the combined fiscal 2018 earnings of the SoftBank unit and Yahoo Japan.

The projected slowdown comes amid seismic changes afoot in Japan's telecommunications industry -- including the advent of fifth-generation mobile service and government pressure to lower rates -- that will reshape the competitive landscape. For the SoftBank mobile unit, which relies more on its wireless business than do its two main rivals, diversification through moves like the Yahoo deal will be vital.

Miyauchi showed little concern about price competition at Wednesday's earnings briefing. Though the president announced a plan letting subscribers who switch from feature phones to smartphones pay as little as 980 yen monthly for a year, he also called SoftBank's rate structure plenty competitive as it is.

"We won't know until the fall" what the prices for smartphone plans will look like going forward, "but we can get by with minor adjustments," he said.

However, the government-led push to slash rates has just begun, and many industry watchers expect an all-out price war.

Japan is set to ban bundling of installment payments for handsets with service charges as well. These two factors "could drag down revenue by more than 500 billion yen" at SoftBank Corp. this fiscal year compared with fiscal 2018, said Tetsuro Tsusaka, a Morgan Stanley MUFG Securities analyst who covers the company.

Carriers also are racing to prepare for the rollout of 5G service next spring, and burning through cash in the process. SoftBank has earmarked just over 200 billion yen for base stations and other infrastructure, but some estimates suggest the unit will need to invest 500 billion yen over five years -- a sum that would squeeze its margins.

With no one carrier clearly positioned to come out ahead in these battles, concern is growing about the outlook for their existing wireless operations. This is especially true of SoftBank, which relies on this business for an estimated 90% of its revenue, compared with 80% for Docomo and 70% for KDDI.

Bringing Yahoo Japan under its umbrella is one way to address this problem. SoftBank Corp. looks to bolster its operations outside telecom through tie-ups with Yahoo that leverage the internet company's massive user base, as well as cultivating new businesses using technology from foreign startups in parent SoftBank Group's investment portfolio.

It was also announced Wednesday that the SoftBank Group would take a 50% stake in smartphone payment platform operator PayPay, now a 50-50 joint venture between the mobile unit and Yahoo.

SoftBank Corp. will need to reassure investors alarmed by the outlook for its mobile operations. The unit's shares closed at 1,311 yen on Wednesday, 13% below their offering price from late last year. The stock has fallen 3% so far this year, underperforming the Nikkei Stock Average's 8% rise.

In what is likely an effort to hold on to investors, the company announced plans for an annual dividend of 85 yen per share this fiscal year, representing a projected dividend yield of more than 6%.

But much of this payout -- a total of 270 billion yen -- will flow into SoftBank Group's coffers. Profits from the Japanese wireless business have fueled the conglomerate's pivot to investing, and a slump at SoftBank Corp. could hinder this strategy.

And while the Yahoo deal will boost the mobile unit's earnings, questions have been raised about the benefits of a deal that some argue simply shuffles ownership of the stake around within the group.