Takeda-Shire deal shows it's US or bust for Japanese drugmakers

Will an aging Japan be left with a hollow pharmaceutical industry? TOKYO -- Japan's Takeda Pharmaceutical has made a loud statement with its $62 billion agreement to acquire Irish peer Shire: It is determined to win in the U.S., where Shire racks up 60% of its sales.

This raises fundamental questions about the future of the Japanese drug industry.

The U.S. was the world's largest drug market in 2017, worth $339.6 billion, according to data from the Japan External Trade Organization. Japan, the No. 2 market, was not even close at $94 billion. And as demographic changes cloud the Japanese outlook, Takeda's big takeover could inspire its compatriots to chase more deals of their own.

Japan's working-age population, which supports the social security system, is in decline. With the costs of universal health care swelling as the population grays, the government is anxious to reduce drug prices. In April, a government price revision stirred strong opposition from Japanese, American and European pharmaceutical companies.

In recent years, the government has imposed price cuts of up to 25% on drugs generating 100 billion yen to 150 billion yen ($913 million to $1.3 billion) in annual revenue in Japan, and cuts of up to 50% on those with revenue exceeding 150 billion yen. It has also sought to encourage a switch from expensive off-patent drugs to generic versions.

These policies come with an element of uncertainty as well. The price of Opdivo, a costly immune system-boosting cancer drug sold in Japan by Ono Pharmaceutical, was slashed by 50% as an "exception," even though annual revenue came to about 120 billion yen.

Unlike in Japan, drug prices in the U.S. are determined by private insurers and drugmakers. As a result, prices of highly effective medicines can skyrocket. Kymriah, a cancer drug released in the U.S. by Swiss drugmaker Novartis in 2017, was selling for $475,000.

The competition is stiff: Pushing into the U.S. means going up against powerhouses like Pfizer and Merck & Co. 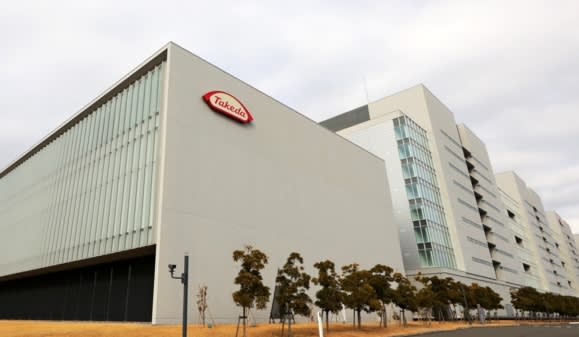 Takeda has moved researchers from this facility in Fujisawa, near Tokyo, to the U.S.

For the past decade or so, Takeda has been aggressively expanding overseas, mainly through acquisitions. In 2008, it bought Millennium Pharmaceuticals of the U.S. for about $8.8 billion. It followed up in 2011 by acquiring Switzerland's Nycomed for 9.6 billion euros ($13.7 billion at the time).

Takeda, which has strong brand power in its home market, now earns nearly 70% of its sales abroad. Yet the proportion of U.S. sales is still only about 30%.

By purchasing Shire, Takeda President Christophe Weber is looking to reshape his company's profit structure to focus on the lucrative U.S. market. There is even speculation that Takeda plans to gradually shift key operations to American shores; it has already transferred a number of researchers from Japan to Boston.

Other Japanese drugmakers have been striking deals with the U.S. in mind.

Mitsubishi Tanabe Pharma in 2017 bought all outstanding shares of NeuroDerm for $1.1 billion. The Israel-based, Nasdaq-listed startup develops advanced drugs in the U.S.

The U.S. looks likely to remain the hot spot. Astellas Pharma, Japan's second-ranked drugmaker by sales, has unveiled plans to spend 200 billion yen on mergers and acquisitions, focusing on startups mainly in the U.S. For the year ended March, the U.S. contributed 30% of Astellas' sales, exceeding the ratio for Japan.

Takeda says it intends to keep its headquarters in Japan for the time being. But will the overseas acquisition boom lead to a hollow domestic drug industry? Or will it make pharmaceuticals a growth sector that can help reinvigorate Japan's economy?