Takeda scares away investors with talk of acquiring Shire

TOKYO -- The announcement that Takeda Pharmaceutical is mulling a bid for Irish drugmaker Shire has sent the Japanese company's shares diving.

Investors fear such a large acquisition would put the Japanese company under a heavy debt load and erode its otherwise healthy finances.

Takeda shares on Thursday lost more than 7%. Only two other issues in the Tokyo Stock Exchange's first section suffered steeper declines. This contrasted with Astellas Pharma and Chugai Pharmaceutical, whose share prices rose around 2% on the day.

Whether Takeda goes ahead with the acquisition remains uncertain. In the English statement it released on Wednesday, the company said it is "at a preliminary and exploratory stage" in its dealings with Shire.

Meanwhile, Shire shares on Wednesday surged on the London Stock Exchange following reports of a possible deal. Although Takeda said "no approach has been made" to Shire's board, the Irish company's shares rallied as much as 26% at one point.

Tokyo traders expressed wariness of the plan. Shire has a market capitalization of 32.5 billion pounds ($45.6 billion) as of the end of Thursday, far larger than Takeda's. A fund manager at a domestic asset management company said the acquisition is "well beyond the Takeda's capacity."

If Takeda buys all Shire shares, the company would need about 5 trillion yen ($47 billion) in cash. Atsushi Seki of Swiss financial giant UBS Securities Japan believes the possibility of Takeda making an offer is "considerably low."

Takeda's cash holdings at the end of 2017 stood at about 440 billion yen. At the same time, the company had interest-bearing debt of about 1.1 trillion yen. Acquiring Shire, investors believe, would "inevitably require Takeda to borrow more cash and issue additional stocks."

The market is therefore concerned about how a Shire acquisition would affect Takeda's fiscal health. Takeda's debt-to-equity ratio, a measure of financial soundness, was around 0.5 as of the end of 2017. The optimal ratio is considered to be 1, though anything less than that reflects healthier corporate finances.

If Takeda's interest-bearing debt were to jump by 2 trillion yen, the ratio would swell to 1.5. This would shine a spotlight on Takeda, especially considering that many of its pharmaceutical industry peers are debt-free.

A potential interest-rate hike is another concern. If the rate does rise, Takeda would have to make heavier interest payments, increasing the possibility of the company lowering dividends due to reduced capacity.

Takeda stocks deliver high returns; they are expected to pay a dividend of 3.5% of the share price, higher than the TSE average of 1.8%. "Many investors have come to value Takeda's ability to stably offer an annual dividend of 180 yen per share" said Kazuaki Hashiguchi of Daiwa Securities. 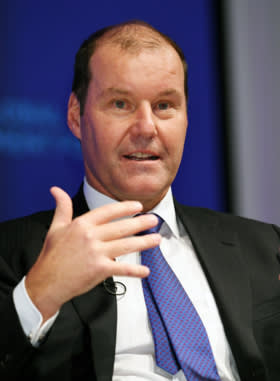 Takeda President Christophe Weber has previously said maintaining the current dividend level is an important commitment to investors. But Thursday's sharp share price decline could be a sign that the market is already factoring in the possibility of smaller payouts.

The big acquisitions Takeda has made in recent years have brought mixed results. The 2008 purchase of Millennium Pharmaceuticals for about 900 billion yen was a good bet. The American company's new drug, Entyvio, which treats ulcerative colitis and Crohn's disease, is a big hit. Entyvio is now one of Takeda's main revenue drivers, with annual sales of over 100 billion yen.

By contrast, Nycomed, the Swiss company Takeda acquired in 2011 for 1.1 trillion yen, has yet to make major contributions.

Pharmaceutical companies have been spending lavishly on acquisitions because the conventional method of developing new drugs by combining compounds has matured to the point where new-drug candidates are elusive.

As a result, drugmakers are in a race to buy up companies with promising treatments. More acquisitions are planned for this year and beyond. Sanofi, a major French drugmaker, is set to pay $11.6 billion for Bioverativ, an American company that sells hemophilia drugs. Celgene, a major biological medicine company based in the U.S., has said it will buy domestic rival Juno Therapeutics for about $9 billion. Recently, Takeda in February 2017 bought Ariad Pharmaceuticals, whose strong suit is developing cancer drugs, for about $5.4 billion.

Rumors of Takeda dealing for Shire emerged with the global industry already in a feeding frenzy. But going through with such an expensive acquisition could end up hurting Takeda's financial health. The company said it will officially announce whether it intends to deal for Shire no later than 5 p.m. London time on April 25.