Singtel and Viettel are also bent on Southeast Asian domination Thailand is one of nine telecom markets where Axiata and Telenor are active.   © Reuters

SINGAPORE -- Malaysia's Axiata Group and Norway's Telenor are about to crank Southeast Asia's already vicious mobile competition up a notch with a proposed merger.

The companies are in talks to combine Axiata with Telenor's extensive Asian operations, creating a player with 50 billion ringgit ($12 billion) in revenue and 300 million customers across nine countries. This would be a direct challenge to two rivals that have been on the offensive regionwide -- Singapore's Singtel and Vietnam's Viettel -- and would likely fuel a broader industry shake-up.

"We are now having conversations to increase our presence in Asia," Telenor CEO Sigve Brekke told an annual general meeting in Norway on Tuesday, a day after his company announced the potential Asian merger, which would leave it holding a 56.5% stake in the new entity. "We will control that company. That gives us opportunities to operate those [underlying operating] companies in our way."

Telenor already draws about half of its revenue from five Asian countries, and most of the rest from North European nations. The merged company would account for two-thirds of Telenor, Brekke said, showing its ambition to become the industry leader in Asia.

Despite the saturation of some markets, Asia still offers fertile ground for wireless providers. But the big opportunities come with major hurdles: Companies are under pressure to cut rates while at the same time they must commit huge investments in 5G networks, advertising and digital services.

"You need to have scale to be able to compete," Brekke said on Monday in Kuala Lumpur.

Axiata CEO Jamaludin Ibrahim echoed that sentiment, adding that "the merger with Telenor may trigger industry consolidation across the region."

The companies say the deal would immediately create 20 billion ringgit worth of synergies, largely from sharing base stations. It would also boost their research and development, with Axiata and Telenor planning to concentrate funds on "internet of things" technology, 5G and talent incubation.

Both players are coming off difficult years, however.

Axiata, which is about 30% owned by Malaysian sovereign wealth fund Khazanah Nasional, has already agreed to let Telenor hold 56.5% of the new company -- showing how eager it is to strengthen its communications business, even if it means handing control to a foreign partner.

For 2018, Axiata suffered a net loss of 5 billion ringgit. The red ink stemmed in part from an asset write-down tied to Idea Cellular, an Indian unit pummeled by price competition. Group operations in Indonesia also reported losses for the year. 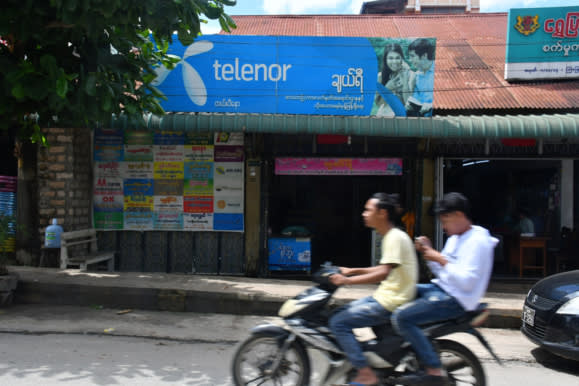 A Telenor sign outside a cellphone retailer in Myanmar's Shan state. The telecom operator is losing customers and revenue due to increasing competition. (Photo by Yuichi Nitta)

Telenor, meanwhile, has seen Thailand's Total Access Communication, or DTAC -- in which it owns a stake -- hemorrhage subscriptions for 12 straight quarters. This resulted in a net loss last year.

The group's Myanmar arm, launched in 2014, is also losing customers and revenue due to increasing competition.

The new company, based in Kuala Lumpur, would be up against two rivals that are rapidly branching out after capturing the biggest shares of their respective home markets.

Singtel, formally known as Singapore Telecommunications, has jumped out to an early lead by investing in telecom players in Indonesia and the Philippines. It has also formed strategic tie-ups in digital operations, such as e-payments and esports. This past March, Singtel participated in a fundraising round for Indian mobile company Bharti Airtel, in which it had already invested.

Including Airtel, the Singtel group cleared 700 million total subscribers in the fiscal year through March 2018. Revenue came to SG$17.5 billion ($12.8 billion); the latest fiscal year's results are due out next week.

Viettel, for its part, is actively expanding in Asia and says it has 90 million subscribers. Since the unlisted company is run by Vietnam's Ministry of Defense, it can cut costs be employing military personnel and equipment, helping it undercut rivals.

After launching Myanmar unit Mytel last year, the group quickly corralled a substantial market share, putting it within striking distance of Telenor. There are also reports that Viettel is negotiating moves in Indonesia and Malaysia.

There are numerous other moving pieces in the South and Southeast Asian mobile game.

In Indonesia, a pair of service providers affiliated with conglomerate Lippo Group lost their 4G licenses because of unpaid service fees. Another conglomerate, Sinar Mas Group, is expected to offload an operator under its umbrella.

And in India, telecom companies are either merging or leaving the market altogether as Reliance Jio, run by India's richest man Mukesh Ambani, is winning both the price and 4G coverage wars.

At the same time, nascent mobile markets like Cambodia, Bangladesh, Sri Lanka and Nepal look primed for growth. But Janice Chong, an analyst at Fitch Ratings, warned that foreign players could be at a disadvantage in emerging markets in terms of regulation and taxation. And as more competitors swoop in, these battles, too, are all but certain to be fierce.