The bigger Japanese automaker needs to tap into India's growth The two car companies said Thursday they will supply each other vehicles in India, where Suzuki holds a market share of more than 40% through local subsidiary Maruti Suzuki.

"We agreed that this approach has merits for both companies," Osamu Suzuki, the Japanese automaker's octogenarian chairman, told reporters.

The cross-supply deal will begin as early as next spring. Suzuki will procure gasoline and hybrid versions of Toyota's Corolla sedan to sell as a high-end model. Toyota will receive the compact Baleno and the Vitara Brezza, a compact sport utility vehicle.

While this may help both sides, Toyota stands to be the main beneficiary. Its market share in India came to a mere 3% last year, compared with 31% in Japan and 14% in the U.S.

Toyota's struggle to penetrate the Indian market reflects a lack of the low-priced compact cars in the greatest demand there now.

The automaker's strength lies in mass-producing standard models it can sell broadly across the 180 markets where it operates. "Building cars tailor-made for emerging markets is not something in which Toyota's expertise can shine," a senior executive says. 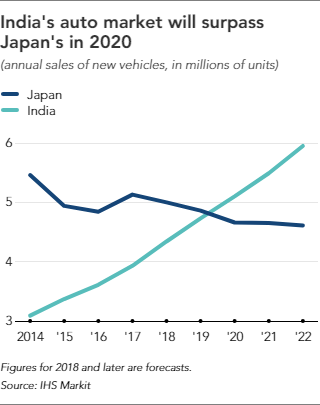 Suzuki, meanwhile, has found success mainly in Asian emerging markets, nowhere more so than India. The South Asian country accounts for half the automaker's global sales. The first locally built Suzukis rolled out there in 1983.

Since then, Suzuki has built up its Indian business in step with the market's growth. It sold 1.6 million autos in India last year, about as many as Toyota sold in Japan.

Speaking at a conference in the western state of Gujarat last September, Suzuki said his company is fully behind Prime Minister Narendra Modi's "Make in India" initiative to support local manufacturing.

The Indian market is expanding fast. Annual new-auto sales are forecast to reach 5.1 million in 2020, rising about 30% over last year's count, according to IHS Markit. That would put India ahead of Japan in volume terms and behind only China and the U.S.

Toyota and Suzuki formed a broad partnership in February 2017 and have been inching toward a joint effort in India. The following month, Toyota President Akio Toyoda and Suzuki's chairman met with Modi. That it took the automakers a year to reach the cross-supply deal reflects a measure of deference toward the Modi government. Thursday's announcement made a nod to policy priorities like helping India reduce pollution and improve energy security.

Emerging markets have become catalysts for alliance building in the auto industry. China's Zhejiang Geely Holding Group has tied up with Daimler, becoming the German automaker's top shareholder. Collaboration is expected in areas like batteries for electric cars, which China is promoting. Nissan Motor took a one-third stake in Mitsubishi Motors, a smaller Japanese competitor with an attractive business in Southeast Asian markets.

All this is happening amid an upheaval in the automobile industry triggered by technology-driven changes like ride sharing and the rise of automated driving. For now, the partnership between Toyota and Suzuki in India does not go beyond the old-fashioned business of building cars. But both still need to reckon with competition against tech giants like Google.