NAGOYA/OSAKA -- Toyota Motor is entering the electric car market at full force, an area it was one step behind in, with technological help from battery partner Panasonic, as it shores up its presence in the world's largest auto market of China.

The companies on Tuesday announced plans to set up a joint battery venture by the end of 2020, with Toyota taking a 51% stake and supplying 500 staff. Panasonic will own the rest and provide 3,000 people. Sales of batteries produced by the new entity will be handled by Panasonic.

Toyota is forming the partnership with an eye on China, as government policies there drive rapid growth in the field. Japan's top automaker was initially cautious about foraying into electric vehicles given technological and cost hurdles, but China's state-led drive to become the global leader in the field has forced its hand.

Toyota's bread-and-butter hybrids do not count toward a new quota that China has set from this year, requiring automakers to produce and sell a certain number of electric or fuel cell vehicles.

The promise of the massive Chinese market has spurred the world's top automakers to shift toward electric vehicles. Volkswagen has broken ground on a Shanghai factory capable of producing 300,000 electric cars that will begin operations in 2020. China's BYD and Beijing Automobile Works have expanded their electric vehicle offerings thanks to government subsidies.

Toyota also plans to release its own electric car in 2020 but still lags behind competitors on commercialization and mass production. The partnership with Panasonic will also give Toyota an edge in an attempt to make its batteries the industry standards. 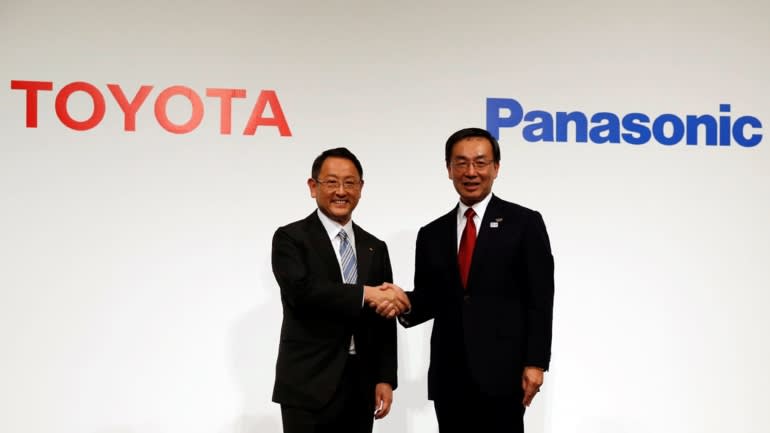 Although China's Contemporary Amperex Technology surpassed Panasonic to become the world's top shipper of lithium ion car batteries by volume in 2017, the Japanese company still remains No. 2. Rivals in Japan like NEC, meanwhile, have pulled out of the battery business due to tight margins. Panasonic has built up mass production techniques by supplying batteries to Toyota for hybrids and to Tesla for electric cars.

In addition to seven technology partners, including Mazda Motor, Suzuki Motor and Subaru, Toyota is also trying to persuade Honda Motor to buy the new joint venture's batteries. The automaker will also pitch Western rivals on the batteries as it seeks to reduce costs from economies of scale and standardize battery packs for easier reuse and recycling.

There are no standard sizes or specifications for batteries used in electrified vehicles. Even the square prismatic batteries jointly produced by Toyota and Panasonic have varying specifications, keeping production line equipment costs high. The companies are racing to lay the foundation for standardization by creating a generic battery that can be adopted by many automakers.

For Panasonic, the partnership will enable it to share massive upfront investments with Toyota, but its 49% stake in the new venture means its share of sales and profit will go down accordingly.

All of Panasonic's Japanese plants producing square prismatic batteries will be placed under the joint venture, including its main factory in Hyogo Prefecture. A Chinese factory in the city of Dalian that began shipments in March last year will also operate under the joint venture. Facilities related to Panasonic's partnership with U.S. electric car maker Tesla will remain separate.

Panasonic's prismatic battery technology was inherited from Sanyo Electric, which it turned into a wholly owned subsidiary in 2011. The acquisition, which cost a total of about 700 billion yen ($6.4 billion at current rates), "was mainly aimed at acquiring prismatic batteries," said a Panasonic executive.

Panasonic decided to accept an investment from another company in its battery business because of a massive cost burden. Building a production line capable of churning out 1-gigawatt-hour worth of batteries annually, enough to supply 10,000 electric vehicles, is estimated to cost between 5 billion yen and 10 billion yen.

The company set up a strategic investment war chest of 1 trillion yen covering the four years starting in fiscal 2015, investing in such projects as Tesla's sprawling battery plant in Nevada. But even businesses involving Tesla are lagging in profitability. The battery segment's profit forecast for the current financial year was cut by 7 billion yen in October, to 22.1 billion yen.

Panasonic is preparing to expand its Nevada factory and increase production for Tesla’s upcoming EV plant in Shanghai. Both projects could cost tens of billions of yen. To make the hefty investments necessary to remain competitive in the battery industry, the company was forced to turn to Toyota for financial help.

Although President Kazuhiro Tsuga has returned the electronics maker to profit growth since taking the reins in 2012, he acknowledged the company "is not generating capital for investment." The company's interest-bearing debt shot up 92.5 billion yen in the six months through September, to 1.33 trillion yen.

The battery industry requires upfront investments. Factories may be built without existing customers or automakers may demand price cuts if their cars don't sell. But under the joint venture, Toyota is, in effect, a guaranteed buyer of Panasonic's batteries.

If the new entity is an equity-method affiliate, as expected, Panasonic will only be able to book a portion of sales and profit. "There is also the risk that accumulated proprietary technology will be taken by Toyota," said a source close to Panasonic's battery business.

Panasonic's stock has slumped amid the battery segment's uncertain prospects. The shares hit a two-and-a-half-year low last month, dropping by roughly half in a year. Its market capitalization is just 40% of Sony's.

"If you only look at businesses with growth potential, we can earn profit on part with that of Sony's," said a Panasonic executive. Others have noted, however, that Panasonic has lagged behind in structural reform. The battery joint venture could accelerate Panasonic's reforms.