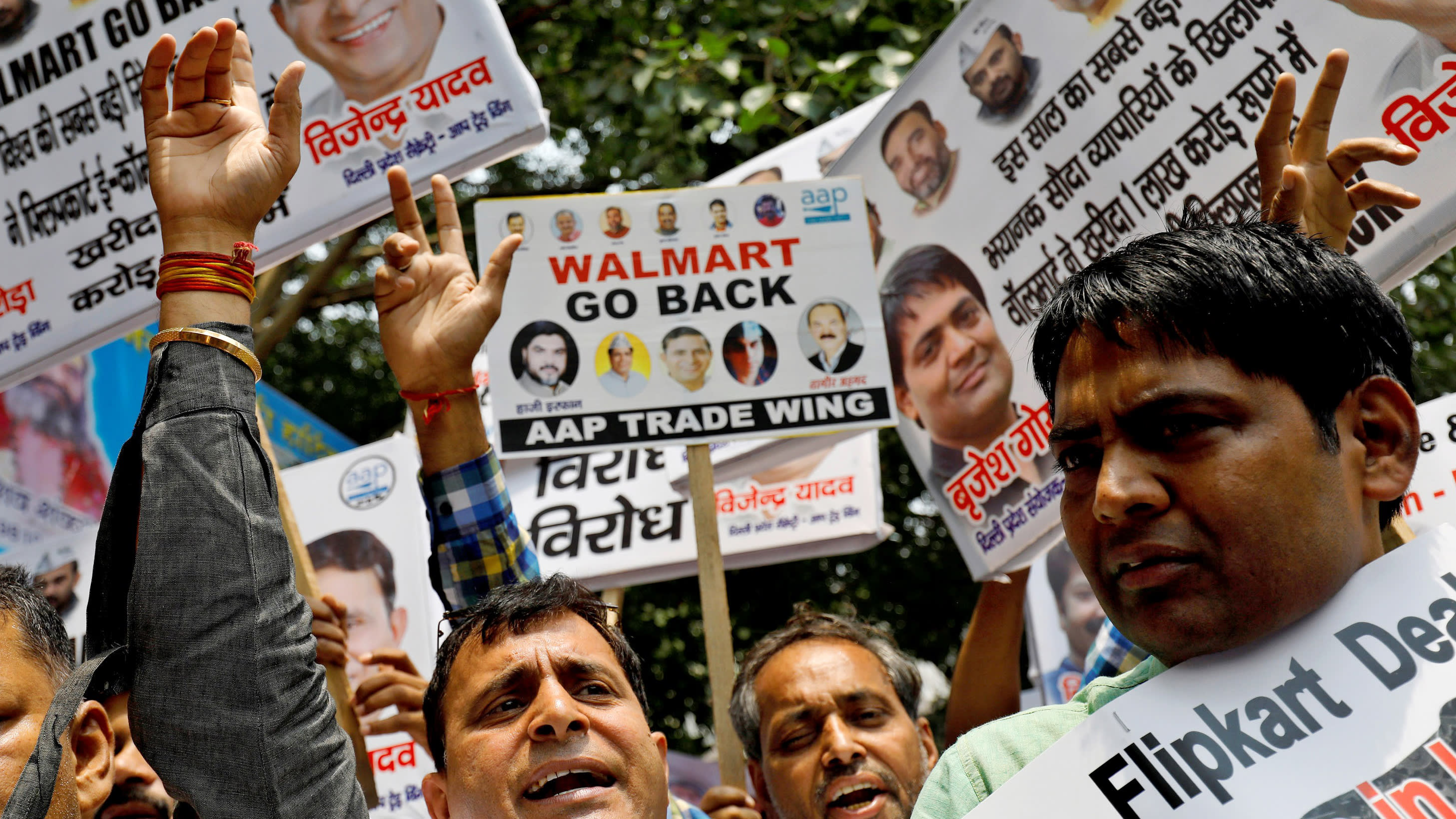 NEW DELHI -- Indian traders, workers and farmers have stepped up their campaign against U.S. retailer Walmart's proposed acquisition of India’s biggest e-tailer Flipkart, demanding that the government stop the $16 billion deal on the grounds that it will harm the nation’s economic and digital sovereignty and hit millions of jobs.

The American retailer, which operates 21 cash and carry stores in India, last month announced it was taking a 77% stake in Flipkart, giving the Indian company a valuation of $20.8 billion.

However, many in India are opposed to the deal, with more than 100 organizations, including online and offline vendors, traders’ bodies and workers unions, this week issuing a joint public statement against it.

The acquisition of Flipkart “is the latest step in a series of developments aimed at circumventing the existing FDI [foreign direct investment] cap in multi-brand retail by permitting foreign-owned online retail in India, and developing a digital stranglehold by foreign companies over India’s consumer goods value chain,” the organizations said in their statement, adding that allowing FDI in e-retail was “a backdoor entry” point for foreign players into multi-brand retail.

At present, up to 51% FDI is allowed in multi-brand retail, subject to certain conditions -- one of which is that at least 30% of the value of procurement of manufactured/processed products purchased should be sourced from Indian micro, small and medium-sized industries. However, the rules on FDI in online retail lack clarity, and traders have long sought an e-commerce policy.

The public statement follows the filing of a petition against the Walmart-Flipkart deal by the Confederation of All India Traders (CAIT), which represents about 70 million merchants, to the Competition Commission of India.

Strongly opposing the Flipkart acquisition, the petition said Walmart would “create an unfair competition and uneven level playing field, and will indulge in predatory pricing, deep discounts.” Walmart, which will own a majority stake in Flipkart, will prioritize its inventory, denying market access to non-preferred sellers, leading to a “complete annihilation of small-time traders," on offline platforms, it added. 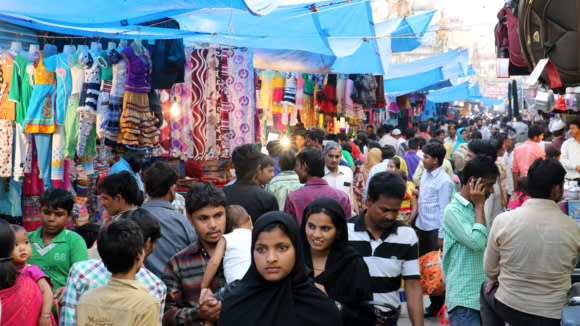 Small Indian retailers, like these market traders in New Delhi, are worried the influx of big foreign e-tailers will force them out of business. (Photo by Ken Kobayashi)

According to Mohan Gurnani, President of the Chamber of Associations of Maharashtra Industry and Trade in the country’s west, not only will small businesses be hit but the deal will also create social disorder due to increased unemployment.

He said that the worst affected would be small brick-and-mortar retail stores, which account for more than 90% of the Indian retail sector, small and medium enterprises, small delivery companies and suppliers of goods, including farmers whose margins will be “ruthlessly” squeezed. “Walmart is well-known for its global supply chain, especially of cheap goods from China, which means local manufacturers and suppliers will suffer deep hits.” 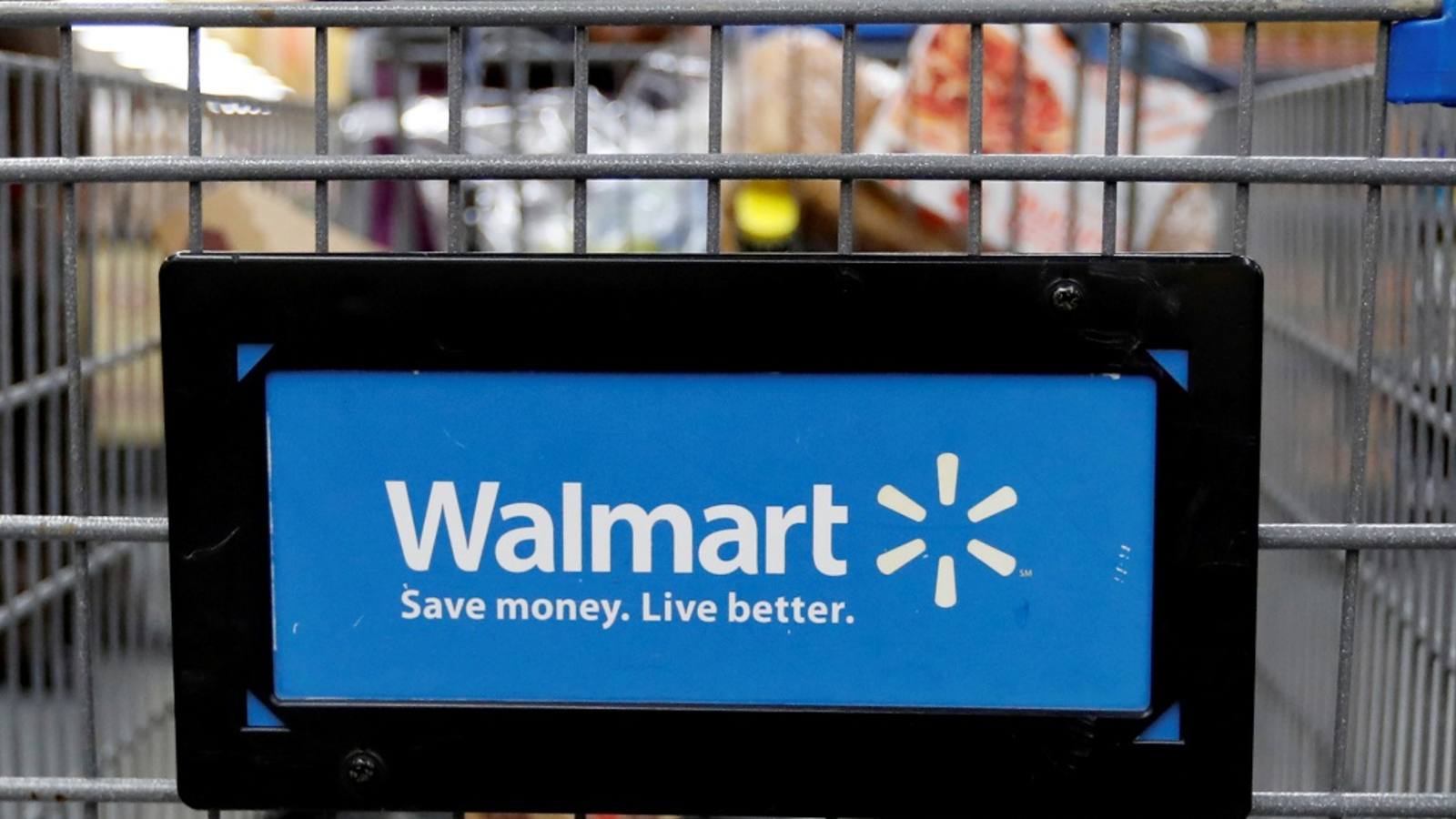 Gurnani pointed out that small traders had traditionally been supporters of Prime Minster Narendra Modi’s Bharatiya Janata Party, and the government must not allow the deal, which is awaiting regulatory approval, to move forward.

Putting forward the farming community’s views, Yudhvir Singh, National General Secretary of the Bharatiya Kisan Union (Indian Peasant’s Union), pointed out that most Indian farmers were marginal, unorganized and illiterate. “We are not even in a position to transport our produce to local market, how will we understand the nitty-gritty of e-commerce?”

“The welfare of farmers is not taken into consideration while allowing such deals,” he said, adding they will keep on raising their voice against the entry of multi-nationals that harm their interests.

Shyam Bihari Misra, a former BJP member of parliament and President of Bharatiya Udyog Vyapar Mandal, an association of small business owners, said the government should consult traders and frame a policy for domestic e-commerce pending which the Walmart-Flipkart deal should be shelved. “Walmart is not needed in India. It should not be allowed in India either directly or indirectly by the BJP government.”

“Small traders and medium traders will be finished, and this will be irreversible,” said Amitava Guha from the Centre of Indian Trade Unions, warning of mass unemployment.

Experts say the deal is not good for India’s retail business, which is worth $670 billion -- a third of the country's gross domestic product.

According to economist Prof. Prabhat Patnaik, the duopoly of Walmart and online retailer Amazon will dominate the Indian online retail.

Seeing the huge potential in India, Amazon entered the country’s e-commerce market in 2013 and has committed investment of about $5 billion.

“Even if the local producers do manage to reduce their costs at the expense of their own subsistence in order to prevent outside competition, they will have impoverished themselves anyway. If they do not reduce their cost [to match the e-tailers’] … they will become unemployed,” Patnaik said.

He pointed out that while there were some protective measures for traditional retail, in the online sector “we don’t have tariff policies and quantitative restrictions, as a result there is no way that cheaper imports can be kept out,” he said. “No matter how much direct employment they actually generate, the employment they would destroy would be many, many, many times what they generate.”

Prabir Purkayastha, president of the Free Software Movement of India, which also signed the public statement against the deal, said the e-commerce companies now had integrated online and offline strategies, meaning that allowing 100% FDI in e-retail in India was "a violation" and a way for foreign companies to enter the country's multi-brand retail sector by the back door. He said the BJP was being hypocritical, having a decade ago -- when it was the main opposition party -- strongly opposed the entry of Walmart, but now was “happy to welcome its far more powerful, digitally-enabled avatar.”

The signatories of the public statement said they were being more vocal against the Walmart-Flipkart deal compared to when Amazon and other multinationals entered India because the threat was now greater. Two multinationals, Walmart and Amazon, will dominate the Indian e-commerce sector and will control the whole supply chain, they said, adding that this would aggravate unemployment.

“Until the Indian companies dominate the country’s e-commerce sector we can regulate them asking them to [take care of local traders’ interests] but when the foreign firms enter with their huge global data and power they cannot be regulated... Your consumption behaviour becomes so much dependent on them that even if the government wants to regulate them it won’t be able to do so,” said Parminder Singh from non-profit organization IT for Change.

In light of the objections, the Modi government is expected to tread carefully around the proposed deal, especially given that two of the country’s major states -- Rajasthan and Madhya Pradesh -- head to the polls this year, and with general elections due by the middle of next year.

According to The Telegraph India newspaper, the BJP’s parent organization Rashtriya Swayamsevak Sangh (or National Volunteers’ Organization) is also opposed to the acquisition of Flipkart by Walmart, arguing that it had the potential to impact millions of local stores as well as farmers.

Citing unnamed officials, the paper reported that “while Walmart's proposal would not be rejected outright, a go-ahead to the deal could create problems before the elections.”