Why did Masa Son spend $3.3bn on an investment company?

TOKYO -- SoftBank Group's announcement on Feb. 15 about its plan to acquire American private equity giant Fortress Investment Group is the Japanese conglomerate's first major cash injection in an investment fund and represents a departure from its expansion strategy centered around technology and telecommunications. But why did it pick an investment company?

Though the decision seems to make little sense at first glance, there are some clues as to what the company is up to.

"We look forward to benefiting from its leadership, broad-based expertise and world-class investment platform," SoftBank Chairman and CEO Masayoshi Son said in the news release announcing the $3.3 billion acquisition deal. He also noted that this will help the soon-to-be-established $100 billion SoftBank Vision Fund, which is to be set up with Saudi Arabia's state investment fund.

Fortress manages some $70 billion of assets in private equity, real estate and media, as well as cash flow-generating businesses such as a ski resort and railway company. Since acquiring Logan Circle Partners in 2010, the group has rapidly expanded its fixed income investment business. SoftBank seeks to leverage Fortress's investment know-how.

A crucial link between the Vision Fund and Fortress is Rajeev Misra. The India-born Misra, who heads the London-based $100 billion SoftBank-Saudi Arabia fund project, was a senior executive at Fortress's London office before joining SoftBank. 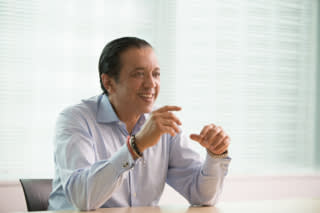 After acquiring an MBA from MIT Sloan School of Management, Misra spent 17 years in various roles at Deutsche Bank and Merrill Lynch before working at UBS where he was global head for fixed income, currencies and commodities.

When Misra joined SoftBank in 2014, he said one of his roles was to advise Son in moving to financing investments with private equity cash instead of debt.

"With a market capitalization of around 8 trillion yen ($70.7 billion at current rate) and net debt of around 4.6 trillion yen, excluding Sprint, as of the end of March 31, 2015, the liability structure has to be optimized," Misra said in an interview posted on SoftBank's website.

Misra also said that he could help bring in expertise by hiring talent that SoftBank lacked. "We are not just a Japanese company anymore; we are making investments globally. This requires a local presence in the countries where we invest, but we have very few people outside Japan with domain experience working in different industries," he said.

While Son is famous for making bold, and often successful bets on prosperous startups, including an early investment in Chinese e-commerce giant Alibaba Group Holding, a $100 billion fund is no small deal. He needs support in order to sift through investment ideas, Peter Milliken, an analyst at Deutsche Securities, noted.

In December, Son pledged a $50 billion investment in the U.S. and 50,000 new jobs in the country in a meeting with President-elect Donald Trump. The acquisition of Fortress is part of the plan to learn the know-how to invest in companies in the U.S.

With the Vision Fund running and Fortress under its wing, SoftBank will oversee $170 billion, making it one of the largest private investors in the world. Through investments, the company envisions building connections with the most important upcoming companies in the world, preparing themselves for the age of the internet of things.