A decade on, Alibaba's Singles Day grabs shoppers across Asia SINGAPORE -- In the nine years since Alibaba Group Holding held its first Singles Day shopping promotion in China, the annual event has grown from a gimmicky marketing campaign to the world's biggest online sales extravaganza.

Now, the festival dedicated to the glory of consumerism, held on Nov. 11, is spreading from China to South Korea, Southeast Asia and beyond, setting off a battle royal among e-commerce retailers for global customers.

The shopping celebration, which grew out of a day for single young people in China, developed slowly: In 2009, Alibaba recorded gross sales on its platform of less than 100 million yuan ($14.4 million at the current exchange rate). But by last year, the figure soared to more than $25 billion, making Singles Day nearly four times as large as Cyber Monday, the hyped-up pre-Christmas online retail campaign in the U.S. that follows the Thanksgiving Day holiday in late November.

For the Chinese e-commerce conglomerate and other retailers, Singles Day in China is evolving as online and offline shopping begin to merge. Alibaba's Tmall shopping site has tie-ups with 200,000 brick-and-mortar shops, offering 180,000 brands, up 30% from last year.

JD.com, another major Chinese internet retailer, also works with affiliated stores, as well as big foreign retailers such as Walmart of the U.S. and France's Carrefour. The company rang up $19.1 billion in sales during its 11-day event last year, which began on Nov. 1. It has also launched its own promotional campaign in June.

Chinese companies have inspired their peers in neighboring countries, where online shopping remains underdeveloped due to difficulties with internet infrastructure and logistics. According to a recent report by the Economist Intelligence Unit, online sales account for less than 4% of total retail sales in Association of Southeast Asian Nations countries. That translates to "significant room for growth for e-commerce," despite a strong shopping-mall culture in the region, the report said.

Despite the annual craze of Singles Day, online shopping is still in its infancy in Southeast Asia. "I'm a firm believer that e-commerce will not replace physical stores anytime soon," said Tan Hai Hsin of Retail Group Malaysia, a consultancy. "In fact, in recent years, both [online and offline] ... are crossing into each other's territory, and I believe this trend will continue." 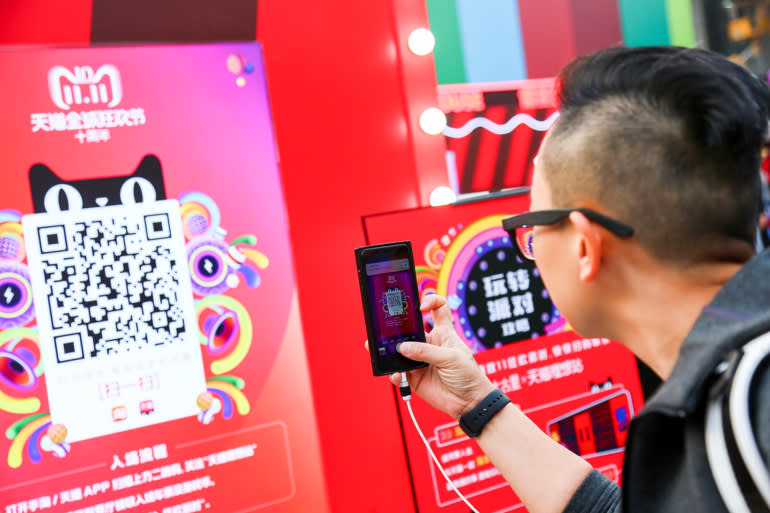 This year's Singles Day, on Sunday, will be crucial for Alibaba -- it will either shore up investor confidence on the union of online and offline retail or add to the challenges for chairman-in-waiting Daniel Zhang Yong. Alibaba's founder, Jack Ma Yun, in September said that he will step down next year and hand over the reins to Zhang, the company's CEO and key architect of the Singles Day event.

But the company has hit a rough patch, disappointing investors earlier this month with its latest quarterly earnings report and cutting its full-year forecast. The New York-listed company reported sales of 85.15 billion yuan for the three months ending September. Although that was a 54% increase from the previous year, it fell short of the consensus forecast of 86.51 billion yuan. Alibaba said the lower-than-expected results were due largely to weaker sales growth in its online business, which accounts for about 85% of its revenue.

The company is accelerating its global expansion in an effort to lift its bottom line. To attract more overseas shoppers, including in Europe and North America, to this year's Singles Day event, Alibaba has developed an artificial intelligence-powered tool that provides instant translations from English to Thai, Vietnamese and Indonesian. AliExpress, Alibaba's global retail platform, also offers an artificial intelligence translation tool that allows English speakers to communicate with those who speak Chinese, Russian, Spanish, French, Arabic and Turkish.

Singapore-based online shopping platform Lazada, a subsidiary of Alibaba that operates in six markets in Southeast Asia, is expected to handle 400,000 brands and more than 50 million deals on Singles Day, hoping to encourage shoppers to splurge on items ranging from food to baby products to cosmetics. Last year, Lazada handled merchandise with a gross value of $123 million, up 191% from 2016.

Pierre Poignant, executive president of Lazada, noted that Singles Day has seen record sales every year, indicating the "increasing popularity" of the event for consumers in the region. "We aim to always be the No. 1 online shopping and selling platform in Southeast Asia for the long haul," he told the Nikkei Asian Review.

"It is no longer enough for businesses to focus on Singles Day alone," said Alban Villani, managing director for Southeast Asia, Hong Kong and Taiwan at online marketing specialist Criteo. "To ensure that a retailer's content [aimed at] shoppers is not ... overlooked, engagement should start early," Villani said. 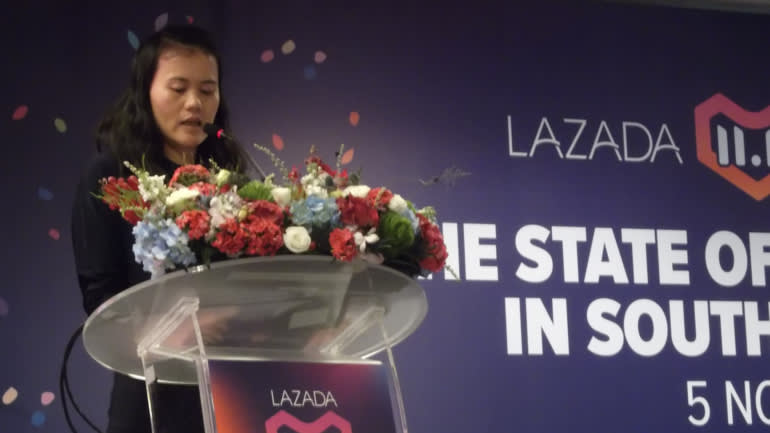 Lucy Peng, executive chairwoman and CEO of Lazada, speaks at a media event in Singapore earlier this week ahead of the Singles Day shopping promotion on Nov. 11. (Photo by Justina Lee)

Christina Tay, a 29-year-old account executive in Singapore, said she was excited for this year's Singles Day sale. "I have already put the items I want to buy in my shopping cart, and hopefully I can see further discounts for them," she said.

E-commerce companies in Indonesia have joined the party, designating Dec. 12 a day for big discounts. Dubbed National Online Shopping Day, 254 marketplaces took part in 2017, with the value of transactions reaching 4.7 trillion rupiah ($320 million), a 42% increase compared with the previous year, according to local media.

Dendi Ramdani, department head of industry and regional research at Indonesia's Bank Mandiri, noted that the Singles Day event "does not yet affect significantly offline retailers," because online sales make up only a small portion of total retail sale in the country, and because "most offline retailers usually also have online outlets."

Three of Indonesia's top five e-commerce sites -- Shopee, Lazada and Blibli -- are expected to offer huge discounts on Sunday. And Thai fashion e-commerce site Pomelo on Friday got a jump on Singles Day with promotions on roughly 3,000 products.

In the Philippines, where Lazada is the leader in the country's $1.2 billion e-commerce sector, mobile payment companies are eager to ride the Singles Day wave.

PayMaya, the mobile wallet of telecom company PLDT, this week launched discount and cashback promotions for purchases made on Nov. 11. PayMaya is owned Voyager Innovations, which is the process of receiving an investment from Chinese conglomerate Tencent Holdings. It competes with GCash, which is backed by Alibaba affiliate Ant Financial Services Group.

The outlook is less rosy for South Korean online retailers. Online shopping sites are losing visitors, according to recent industry data, with traffic falling about 14% over the past two years. Visitors to the country's six major online shopping malls, including Tmon, totaled 77.97 million in September, down from 83.86 million in the same month last year, according to the Korean Herald.

To drum up sales, Tmon and WeMakePrice, another big online shopping site, this month launched their own separate campaigns. November has become the biggest month for shopping in South Korea. According to government data, 7.6 trillion won ($6.8 billion) worth of goods were sold on online platforms in November 2017, up sharply from 5 trillion won in 2015 and 6.1 trillion won in 2016.

McKinsey & Company said in a recent report that traditional brick-and-mortar stores "should reflect on the shopping trends we see in other parts of the world," as only 6% of global retail customers are purely offline. "Offline Indonesian retailers should prepare for increases in both online sales and online engagement with their customers," the report said.