A view of the Marina Bay Sands, one of Singapore's most iconic locations. Many hotels in the city-state are offering takeout and delivery meals for Lunar New Year to make up for the loss of tourists.   © Reuters
MASAYUKI YUDA, Nikkei staff writerFebruary 11, 2021 15:00 JST | Thailand
CopyCopied

BANGKOK -- Southeast Asia's tourism industry is working with governments to make the most of what is likely to be a subdued Lunar New Year by promoting domestic travel and shopping, as the COVID-19 pandemic continues to shut out visitors from abroad.

The Asia-Pacific region saw overseas arrivals drop by 300 million, or 84%, in 2020 compared with the previous year, according to the World Tourism Organization. That was the largest drop of any region in the world. With fresh waves of the deadly virus sweeping many countries in Southeast Asia, the slowdown has stretched into 2021.

Chinese tourists traditionally flock to the region's hotels, restaurants, and souvenir stores during Lunar New Year, bringing their wallets with them. This year, however, a dearth of overseas travelers has prompted tourism-related businesses to hunt for customers closer to home.

In Thailand, many discounts are available on hotel websites and through booking services. A suite with a mountain view at Courtyard Khaoyai by Paka, a five-star hotel in a highland national park in Thailand, was listed on Agoda for 6,493 baht ($217) for two nights during Lunar New Year, nearly 50% off the hotel's usual rate.

"In a change from non-COVID times, our data shows us that beach and countryside spots are more popular than capital city breaks and high-energy destinations," said Timothy Hughes, vice president for corporate development at Agoda. This year, for the first time, the Lunar New Year will be a public holiday in Thailand. The government added another special holiday in April, July, and September to give people more long weekends in hopes of encouraging domestic travel.

The government launched the "We Travel Together" program in July 2020 to revive the moribund tourism industry. Thai tourists only have to pay 60% of normal room rates, with the government subsidizing the rest. The government will also cover 40% of the cost of airline tickets.

Financial authorities allocated 22.4 billion baht for the program in 2020. Finance Minister Arkhom Termpittayapaisith has vowed that the program will be sufficiently funded to continue this year. Hotels are counting on it -- and adding their own discounts to attract more domestic guests despite the extra cost of hygiene measures. The government is eager to support the industry, as tourism accounted for roughly a fifth of the kingdom's gross domestic product before the pandemic.

But these efforts will not make up for the lack of Chinese visitors. Thailand's consumer spending over the Lunar New Year will drop 22% to 44.9 billion baht, according to Thanavath Phonvichai, president of the University of the Thai Chamber of Commerce.

The second wave of the coronavirus, which swept through Thailand starting in mid-December, discouraged people from going out or traveling, and the government and companies have been unable to create promotional events to attract crowds. The Bangkok Metropolitan Administration decided not to host Lunar New Year celebrations in Yaowarat, the capital's Chinatown. Retail giant The Mall Group will spend 120 million baht on its Lunar New Year promotional campaign, unchanged from last year. The company will offer special discounts and hold a prize drawing. But it appears it will not hire Thai pop stars to visit stores as it did in 2020 because a throng of fans would make social distancing difficult.

Supermarket chain Tesco Lotus, meanwhile, is targeting people who have opted to celebrate quietly at home with their families. It is offering free delivery for Lunar New Year offering set priced over 100 baht.

The Singapore tourism industry, which welcomed 2.4 million visitors in Jan. and Feb. 2020, is also banking on spending by local residents -- many of whom would travel abroad in normal times -- offering "staycation" packages and takeout food while maintaining social distancing measures.

The iconic Marina Bay Sands hotel, for example, offers a package that comes with a Chinese New Year-themed lunch. Many hotels are offering New Year takeout and delivery meals in hopes of attracting business from those who prefer to stay at home.

Many hotels and related businesses are also taking advantage of the Singapore government's stimulus package. In December, the government launched a travel subsidy campaign that offers all adult Singaporeans a digital voucher worth 100 Singapore dollars ($75) that can be used at local hotels, tourist attractions and other venues. 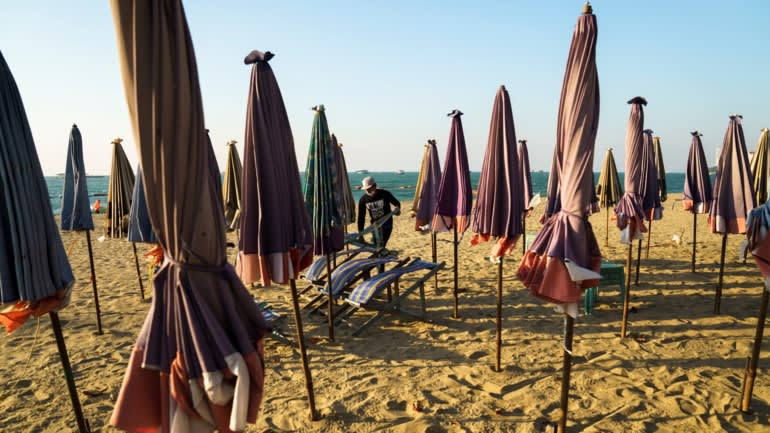 A man gathers up chairs on an almost empty beach in Pattaya, Thailand. The tourism industry in Southeast Asia has been hit hard by the loss of foreign visitors.   © Reuters

Regional travel agencies, such as China-based Trip.com and Indonesia-based Traveloka, have partnered with the Singapore Tourism Board to handle bookings for voucher users. According to the government agency, 300,000 people participated in the subsidy program in the first month. The campaign will run through June.

Indonesia has the highest number of COVID-19 cases in Southeast Asia, and its tourism sector has taken a battering as the country closed its borders to most overseas arrivals. Foreign tourist arrivals were down 75% on the year in 2020, with occupancy at starred hotels averaging 41% in December, a nearly 20 percentage point drop from 2019.

Many hotels in the archipelago introduced a "pay now, stay later" system during the pandemic, allowing people to pay room charges in advance at a discounted price for a later stay.

"The program was initially designed at the beginning of the pandemic, hoping that COVID-19 could be overcome by the end of the year," said Hariyadi Sukamdani, chairman of the Indonesian Hotels & Restaurants Association. "However, many of our members have [had to] extend their stay ... period until 2022," he added. Some members have introduced package deals offering airline tickets and hotel rooms at discounted prices.

Like many other hotels, Tauzia Hotel Group, which operates more than 60 hotels across Indonesia, implemented a pay now, stay later program. "We will [continue] the program until March," said Irene Janti, the company's marketing director. "But after that, we are still undecided on whether we should extend it. On the one hand, there is hope that vaccines can boost people's confidence in traveling, but on the other hand, government policies are still difficult to predict for us to take strategic policies," Janti said.

Additional reporting by Kentaro Iwamoto in Singapore and Shotaro Tani in Jakarta.