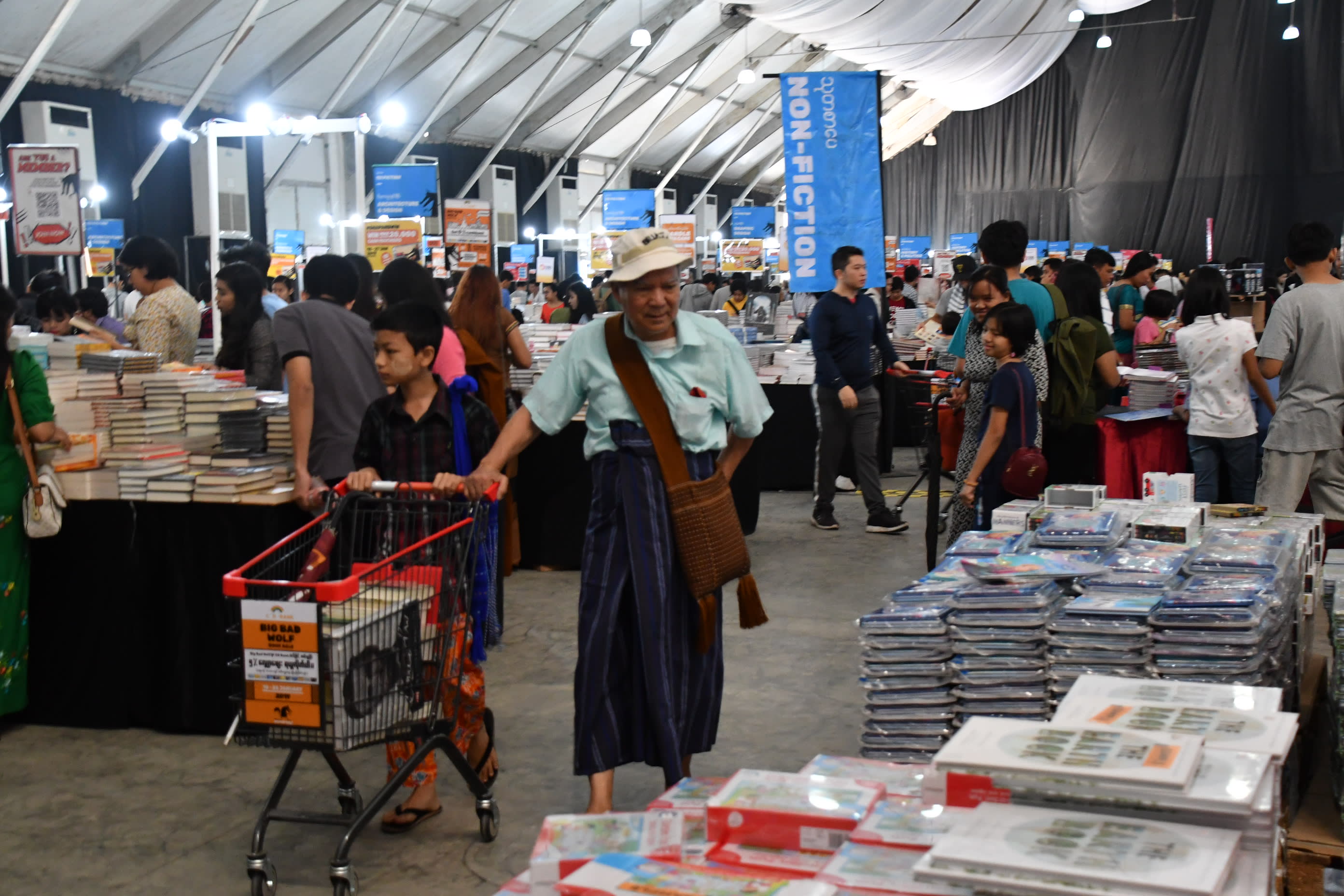 YANGON -- A Malaysian seller of affordable English books with a unique business model has branched out to Myanmar to capture demand among the country's legion of English-language learners.

Big Bad Wolf Books, in Shar Alam, outskirt of Kuala Lumpur, hosted a touring book fair in the Myanmar metropolis of Yangon for 11 days through Jan. 28. Guests young and old visited round-the-clock to browse through the million books written in English, arranged in dozens of shelves within an exhibition hall.

Customers filled their carts with five or 10 books, if not more. The volumes are all brand new, yet they can be bought at 50% and 90% discounts from the original price tags.

The event reportedly drew 150,000 people, selling over 22,000 titles. The genres ranged from fiction to non-fiction, history to design, and even architecture.

"We are also surprised because many in the young generation buy a lot of books," said Myo Aung. "Most selling is business and self-help books, secondly biography, then history."

"We have reached our expectation more or less, and we plan to continue in the coming years," Myo Aung added. "We also want to expand this to Mandalay," he said, referring to Myanmar's second-largest city.

The Big Bad Wolf Book Sale launched in 2009 as the brainchild of Malaysian bookstore owner-couple Andrew Yap and Jacqueline Ng. The book fairs created enough buzz that Big Bad Wolf began hosting events in Indonesia and Thailand in 2016. The book fairs have since spread to the Philippines, Sri Lanka, Taiwan and the United Arab Emirates. Myanmar is the eighth country to join the touring route.

The outfit employs the limited-time book fair model instead of opening permanent outlets for two main reasons. First, the fair venues can house a wide range of titles in one place. Book fairs also eliminate the costs of maintaining storefronts and a logistics network -- and those savings are transferred to the low prices of the books.

Big Bad Wolf buys remaindered books from U.S. and British publishers, negotiating the prices as low as possible. The discounted books are then sold to Asian consumers who normally could not afford the high price of imported volumes. For example, a photobook featuring libraries around the world that would originally go for $70 can be purchased at the Yangon fair for around $12.

Ingyin Khin, a business major living in Yangon who came with a friend, said she really enjoys the book fair. "In Yangon, there are some book shops which sell English books, but they do not have many titles," she said. Her cart included a book on social business, which will help her achieve her dream of becoming an entrepreneur.

Another couple, who were here on their second visit, bought seven books, including a Shakespeare tome.

"I want to improve my English skills," said a 21-year-old woman.

That desire to learn English has intensified throughout Asia in tandem with the region's economic growth. That has translated into demand for English-language books. State Counsellor Aung San Suu Kyi, Myanmar's de facto leader, has frequently encouraged citizens to read.

"Reading can enhance imagination and creative thinking, vocabulary, and overall communication skills," Yap said through a press statement. "It is very important for children and young adults to get exposed to books and make reading a habit."

The end of complete military rule in Myanmar in 2011 also brought down a censorship regime that had stifled the nation. In Thailand, the military junta is expected to hold elections in March. The return to civil government could spur demand for foreign books.

Questions remain, however, on whether digitization is hurting the market for physical books in Myanmar. "People think books are declining, but a huge number of people still love to read books," said Myo Aung, who runs a publishing business himself. That especially goes for English books, since international companies are on the lookout for English-speaking talent.

Myanmar had a per capita gross national income of $1,210 in 2017, World Bank data shows, making it a lower-middle income economy. At this stage, many of the people purchasing English-language books are the narrow group of middle-class buyers.

But near the checkout lanes at Big Bad Wolf's Yangon book fair, there is a section where philanthropists can pick out children's books to purchase and donate. The non-profit organization Save the Library delivers the books to schools, spreading the power of the word in the poorest nation in Asia.