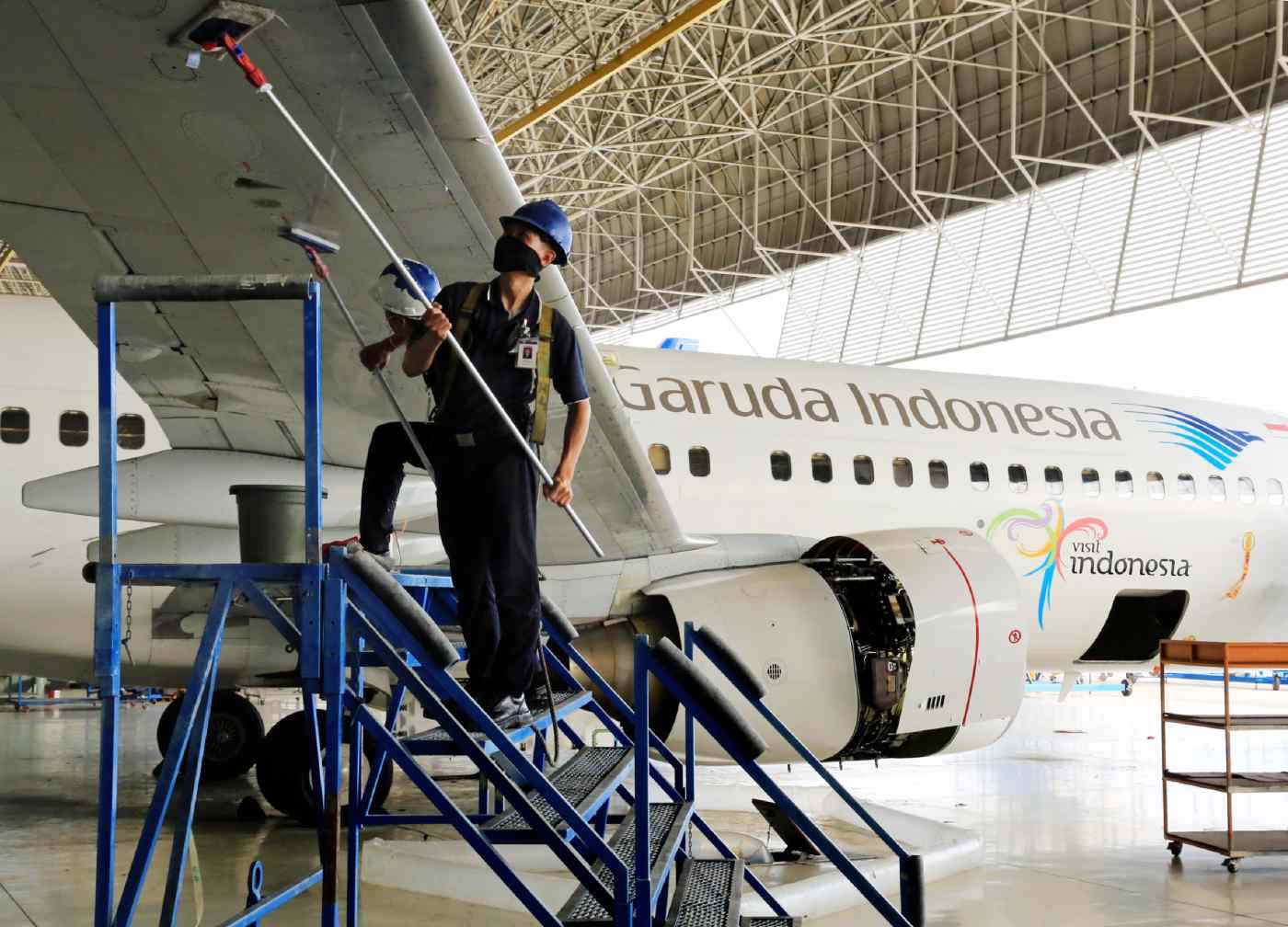 BANGKOK -- Low-cost carriers have changed the face of civil aviation in Asia. In tandem with the rise, the behind-the-scenes market for aircraft maintenance is also changing as companies in countries like Indonesia and Thailand enter the field to challenge the dominance of established Singaporean players.

GMF AeroAsia, the maintenance subsidiary of Garuda Indonesia, opened the world's largest maintenance hangar for narrow body aircraft in 2015 at Soekarno-Hatta International Airport, the gateway to Indonesia, located outside of Jakarta.

The hangar has space for 16 airplanes. Besides aircraft of Garuda and its low-cost affiliate Citilink, planes of various foreign LCCs, including AirAsia, India's IndiGo and Russia's Nordwind Airlines, are also parked, awaiting servicing.

At the facilities, numerous mechanics wearing blue uniforms work in groups, carrying out tasks for specific portions of the aircraft, such as wings and engines.

"We have a lot of demographic [advantage] with a huge population and young workforce in Indonesia," GMF President and CEO Iwan Joeniarto told the Nikkei Asian Review.

The country's population of 261 million is the largest in Southeast Asia. The average wage of general engineers in Jakarta is one-sixth of their Singaporean counterparts, according to a survey by the Japan External Trade Organization in 2017.

Since aircraft maintenance is a labor-intensive business, Joeniarto said, lower labor costs give the company a competitive advantage over Singapore.

For decades, the commercial aircraft maintenance, repair and overhaul (MRO) market in Southeast Asia has been controlled by leading players in Singapore, the regional aviation hub. These Singaporean companies have been providing maintenance services for airlines both in and outside the region.

But they are now facing more competition from service providers in countries such as Indonesia, Thailand and Malaysia.

LCCs are the driving force behind the explosive growth of Asia's civil aviation market, but most of them, including such leading players as AirAsia, the region's largest budget carrier, have only minimal maintenance capabilities and outsource most of the work to companies affiliated with rivals or independent service providers.

Commercial aircraft are required to be inspected and maintained after every flight and overhauled every few years.

Since the aircraft generate no profits while they are being maintained, airlines, especially budget carriers, value quick and efficient turnaround, which can be achieved by intensive use of manpower. This means opportunities for cost-competitive players.

GMF's Joeniarto said the growth potential of Indonesia's domestic airline market thanks to the country's configuration -- a long chain of islands scattered over a wide area -- is also a big boon to the company's business prospects.

GMF plans to spend $400 million in the next five years to expand its maintenance facilities with a strong focus on narrow body aircraft, the popular aircraft type among LCCs. The company, which currently operates four maintenance hangars at Soekarno-Hatta airport, will open new facilities on the Indonesian island of Batam, close to Singapore, in 2019.

The island's wage levels are even lower than in Jakarta and its location is closer to key markets, including Thailand, Vietnam, Japan and South Korea.

GMF plans to open new maintenance facilities in South Korea and the United Arab Emirates as well, through joint ventures with local partners. To maintain cost competitiveness, Joeniarto said its overseas sites will also use Indonesian mechanics that have trained and worked in Jakarta.

In Asia's airline industry, the rise of LCCs has sharply intensified price competition, creating a harsh business environment for major full-service carriers like Garuda, which fell into the red in 2017.

These companies are now seeking to capitalize on the growth of no-frills rivals through the maintenance business. "We want to follow Lufthansa," Joeniarto said. With a sizable business with non-affiliated airlines, Lufthansa's MRO unit accounted for roughly 15% of overall revenue in 2017, the second-largest source after passenger revenue of its group airlines.

Japan's ANA Holdings will jump on the bandwagon by launching maintenance services at Naha Airport in Okinawa Prefecture, close to Asia, in 2019.

Thai Airways International, Thailand's national flag carrier, which also reported losses in 2017, is banking on the expanding MRO market too.

In June, it agreed with Airbus to open a maintenance location within the Eastern Economic Corridor, a special economic zone on the coast of the Gulf of Thailand. Total investment is to be around 11 billion baht ($329 million).

Also in June, Thai Airways was certified by Rolls-Royce as an authorized center to do MRO on the British firm's Trent engines. Thai Airways will not only be serving engines of its own fleet but also those of rival carriers at Don Mueang International Airport, Bangkok's LCC hub.

Meanwhile, Singaporean maintenance powerhouses are turning to state-of-the-art technology such as automation to offer high-quality maintenance and keep their competitive edge.

The aerospace arm of Singapore Technologies Engineering, the world's largest airframe maintenance provider, has started testing unmanned vehicles that fly over aircraft to detect airframe problems such as cracks, stains and scratches.

In a pilot program with Air New Zealand, the company has also started producing spare parts for in-flight equipment such as cup holders and seat tables using 3D printing. This reduces the time to replace broken parts and cost of inventory.

"We want to do more with less people," ST Aerospace President Lim Serh Ghee said. He stressed that the company is pursuing higher efficiency instead of lower labor costs. It also wants to provide "high-value" services to its clients, such as converting retired passenger aircraft to freighters.

With an investment of up to 60 million Singapore dollars ($43 million), the joint lab will conduct a five-year study of automation and digital technologies for next-generation aerospace manufacturing and MRO capabilities.

The expansion of the MRO market is in response to a rapid increase in the number of aircraft operating in the region.

Some 40% of the world's new aircraft deliveries during the 2018 to 2037 period, estimated at 42,000 planes, will come from the Asia-Pacific region, according to Boeing.

Southeast Asian LCCs are expected to be large buyers, adding to airlines of the two emerging giants of China and India. That spells robust growth in demand for airframe and engine maintenance services in the region.

Southeast Asia will account for 40% of that, with Indonesia and Thailand leading the upward trend by growing nearly 100% to surpass Singapore and become the region's two largest markets.

If these countries fail to expand their domestic maintenance capabilities, domestic airlines will have to outsource the services to providers outside the countries. Already in 2017, 60% of aircraft maintenance services for Thai carriers was provided by foreign companies.

The Thai government is taking steps to change this situation by promoting the domestic maintenance industry, including generous tax incentives modeled on Singapore's program.