Alibaba and eBay try their luck in Turkey's e-commerce market 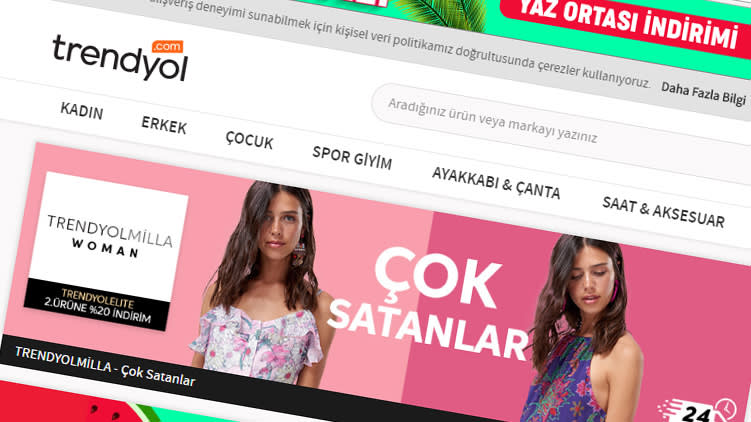 ISTANBUL -- Turkey has caught the eye of global e-commerce players, who like the size and growth potential of its market.

Trendyol, Turkey's largest web-based fashion retailer, announced on June 28 that Chinese e-commerce leader Alibaba Group Holding will invest in the company. The value and size of the stake purchase have not been disclosed but according to several market players, Alibaba will spend about $1 billion to buy a roughly 75% interest in Trendyol from the European Bank for Reconstruction and Development and several U.S. investment funds.

The purchase is thought to be the largest foreign investment in a Turkish startup, surpassing German food delivery service company Delivery Hero's $589 million buyout of Turkish peer Yemeksepeti in 2015. Founded in 2010, Trendyol runs an online fashion e-commerce platform with 16 million users and 90 million visits per month.

"Turkey is an exciting and important market as we assess the development and proliferation of digital economies in the region and around the world," said Michael Evans, president of Alibaba Group, in a statement. "With this investment, Alibaba is partnering with a market leader and a strong, founder-led management team who have built an exceptional company with a strong platform, impressive growth and a loyal merchant and customer base."

Alibaba will help Trendyol create websites and a logistics network. The Turkish company's management, including founder and CEO Demet Mutlu, will remain.

Turkey is a relatively youthful and promising market, with a population of about 80 million, but online shopping only accounts for about 3.5% of the country's retail sector, said Trendyol.

U.S. auction site eBay, which bought a 93% stake in Turkish peer GittiGidiyor in 2011, made it a wholly owned subsidiary in 2016. Abraaj Capital, a Dubai-based private equity group, bought a 25% stake in Turkish e-tailer Hepsiburada in 2015.

In May, a minister in the government of President Recep Tayyip Erdogan said the country is in talks with Alibaba and Amazon.com over possible investments in Turkey. A venture capital source said Amazon is expected to begin operating in Turkey later this year. Alibaba's investment in Trendyol was likely an effort by the Chinese company to get a jump on its U.S. rival.

Web fashion is a difficult business in Turkey and a number of investments by foreign companies have failed. Germany's Limango pulled out of the country in 2015. A unit of Naspers, the South Africa-based media giant, paid more than $200 million for Trendyol rival Markafoni. But it could not turn the business around and was forced to sell it at a loss.