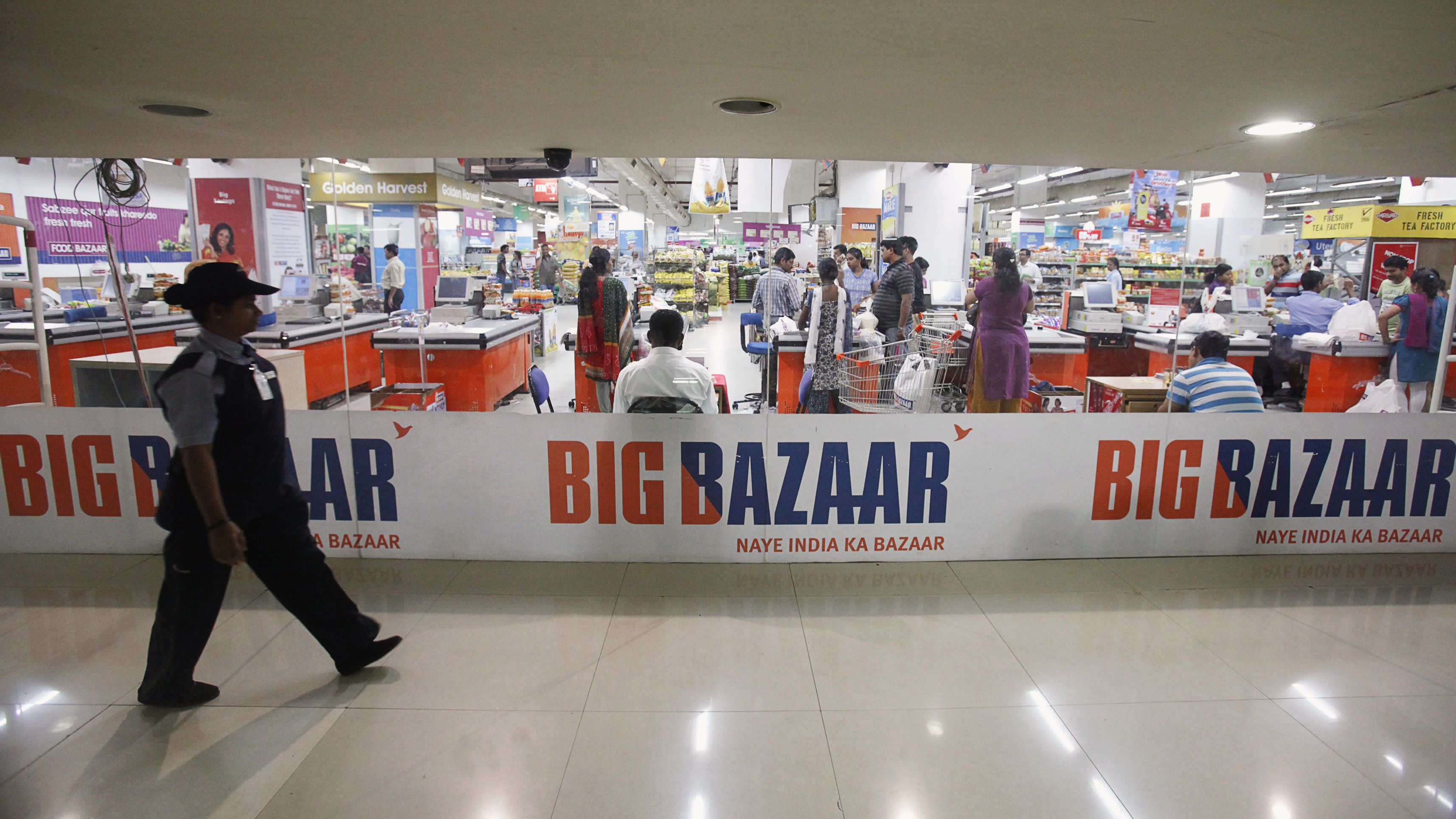 Future Retail has a presence in 253 cities across 26 states and has 10 different retail formats covering food, grocery, fashion and electronics, including the popular hypermarket Big Bazaar.   © Reuters

MUMBAI (NewsRise) -- After pouring billions of dollars into India's e-commerce market, global internet companies are turning their attention to the country's brick-and-mortar retailers in the quest for complementary investments and quicker returns.

The most sought-after target is Future Retail, India's largest grocery chain with 1,200 stores across the country.

Both Amazon and Alibaba Group Holding are said to be in talks with the Indian company. According to reports, Amazon is planning to invest as much as $700 million for a 15% stake, while Paytm mall, the online marketplace of Paytm E-commerce which counts Alibaba Group Holding and Japan's SoftBank Group as investors, is making its pitch in partnership with Alphabet's Google.

Future Retail and Amazon have met multiple times while the Indian retailer's talks with Paytm-Google are at an early stage, a person familiar with the matter told NewsRise.

Representatives at Paytm and Google didn't immediately respond to queries, while spokespersons for Future Retail and Amazon declined to comment.

Much of the lure of physical retailers for foreign investors in India stems from the scope for growth and regulations, which prevent them from holding more than a 51% stake in multi-brand stores.

The $800-billion retail industry has seen a spurt in growth after the entry of ecommerce startups such as Flipkart Internet as well as Amazon in 2013, although the ubiquitous mom-and-pop stores continue to dominate the scene on the ground.

According to retail consulting company Technopak Advisors, organized retail, a term that includes licensed stores and supermarket chains, accounts for just 10% of the industry. Technopak expects that to increase to more than 12% over the next four years as incomes increase and shopping habits change.

At the same time, as the ecommerce industry matures, partnerships between online and offline players are becoming more common, a trend that's influencing deals in India.

For instance, last year, Amazon bought U.S. grocery chain Whole Foods as well as a 5% stake in Indian department store chain Shopper's Stop in a move to drive traffic to its Indian website. The company, which has committed to investing $5 billion in the country, said it would open 80 kiosks in Shoppers' Stop stores where consumers could explore Amazon's offerings.

Besides Future Retail, Amazon is also said to be in discussions with Spencer's Retail, which has 120 stores in over 35 cities, and the Aditya Birla Group for a stake in its More chain of stores.

In China, Alibaba has already made a splash with its technologically advanced Hema supermarket chain that houses restaurants where robotic devices replace wait staff.

It is costly to grow an online channel quickly, said Anurag Mathur, partner and leader for retail and consumer businesses at PwC. Since the cost of acquiring customers is steep, it makes sense to tie up with offline retailers to build scale and speed profits, Mathur said.

For both Alibaba and Amazon, a stake in Future Retail would also bring other benefits, including access to consumer data and an established distribution network to speed deliveries.

Future Retail's biggest advantage is its reach. The company has a presence in 253 cities across 26 states and has 10 different retail formats covering food, grocery, fashion and electronics, including the popular hypermarket Big Bazaar, which caters to urban shoppers and its Easy Day grocery chain. Close to 500 million shoppers visit its stores each year.

Faced with growing competition from online sites, Kishore Biyani, its billionaire chief executive who built the retail empire through acquisitions, has said that he is open to selling a stake to foreign buyers.

Besides Flipkart, which recently received a $16-billion investment from Walmart, and other ecommerce players, home-grown Reliance Retail, backed by billionaire Mukesh Ambani, is emerging as a threat. Reliance Retail is building its physical store brands as well as strengthening its online presence by teaming up with mom-and-pop stores to extend the reach of its delivery network.