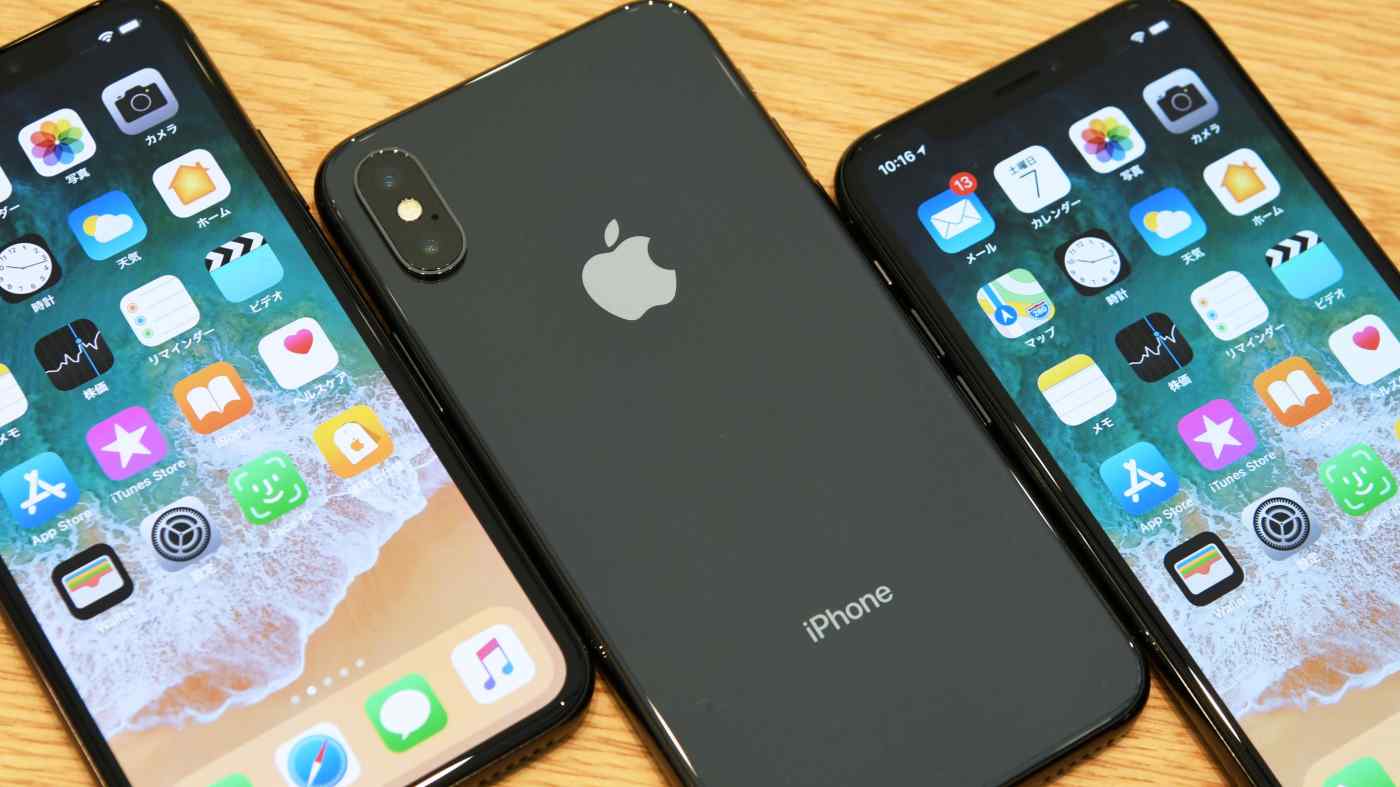 TAIPEI/HONG KONG -- Apple suppliers in Asia are coming under increasing pressure to grow profits as the smartphone market plateaus and while next-generation technologies are still in development stages.

The smartphone industry has been the main pillar of the consumer electronics market over the past decade. Annual smartphone shipments surged to 1.465 billion units last year from just 151.4 million units in 2008, data from research company IDC showed.

But exports fell for the first time last year, by 0.3% from a year ago. Worryingly for exporters, the market has continued to shrink. Worldwide smartphone shipments fell 2.9% year-on-year in the quarter ended March and 1.8% in the following quarter. For the whole year, exports are expected to show a contraction.

Apple, the world's most profitable smartphone maker, managed to ship only 1% more iPhones in the quarter ended June from a year ago as its position as the No. 2 smartphone maker was usurped by China's Huawei Technologies in terms of worldwide shipments. As a result of its slower sales, key iPhone suppliers Hon Hai Precision Industry and Pegatron, which together produced more than 200 million iPhones per year, were also hit.

Foxconn's Android smartphone manufacturing arm FIH Mobile also suffered widening losses in the first half with its operating margin falling from minus 4% to minus 5.2%. The operating margin for Inventec, which makes Xiaomi's smartphones, dropped 0.2 percentage point on the year to 1.7% in the April-to-June quarter. For years the booming smartphone industry made up for the contracting PC industry, which once dominated consumer electronics. Worldwide PC shipments have shrunk for six consecutive years since 2012. The good news is that the scale of the decline has narrowed in the past two years. Last year, it dropped 0.2% on the year to 259.52 million units, supported by steady demand for commercial PCs and gaming PCs.

But the sluggish industry is still a headache to suppliers for which PCs account for more than 50% in revenue. Key MacBook supplier Quanta Computer recorded a nearly 40% year-on-year fall in operating profit in the last quarter. Lenovo Group's key notebook supplier Compal Electronics also suffered a more than 30% fall in annual operating profit, after excluding a bad debt provision of NT$2.9 billion in the June quarter last year.

Against the weak backdrop for PCs and smartphones, large tech suppliers like Foxconn, Pegatron and Quanta are keen on developing next-generation technologies such as artificial intelligence, the internet of things, fifth-generation networks and in the automotive sector.

Foxconn Chairman Terry Gou said earlier this year that AI manufacturing solutions will play a major role in its future. The iPhone supplier spun off its Foxconn Industrial Internet and listed it on the Shanghai Stock Exchange in June to raise 27.1 billion yuan ($3.98 billion) to accelerate the development of industrial AI.

"The next three years will be critical for Foxconn to transform into a big data-driven and AI-focused industrial internet company," Gou told shareholders in June.

Gou has also led a drive to expand in the U.S. The company's $10 billion LCD manufacturing complex in Wisconsin paves the way for Foxconn to access research and development resources in the country. Foxconn also launched a $100 million research partnership with the University of Wisconsin-Madison and set up a new AI company in Silicon Valley in July.

Quanta, the world's largest contract notebook manufacturer, is also moving in the same field and has been investing in the industry for years. "The notebook era is history. We are looking at the futuristic AI's business opportunities," Quanta Chairman Barry Lam told reporters after the company's annual general meeting in June.

Quanta tapped into the cloud-computing business about 10 years ago, one of the earliest Taiwanese electronics manufacturing services providers to enter the field. The company is now the world's largest contract data center builder and it counts Facebook, Amazon and Google as its clients. Quanta started producing AI-enabled data centers three years ago.

Despite these moves, these companies could be facing a few lean years yet. AI applications are still in a nascent development stage and the markets for IoT, automotive electronics, autonomous-driving vehicles are still only budding. Moreover, the applications will rely on the development of 5G wireless networks, which are only expected to be ready in 2020.

In addition, analysts said that many of the next-generation technology products will have a much smaller market than those for PCs and smartphones.

"In the AI, IoT era, it is hard to see any products, especially consumer electronics goods, that can be sold millions of units per year like PCs or smartphones," said Vincent Chen, head of the regional research team and an expert in tracking hardware suppliers at Yuanta Investment Consulting.

Taiwanese suppliers have the ability to vie for business in the new tech age but it will be hard for companies like Foxconn to enjoy the same kind of rapid growth as they did in the past, he said.

Persistent trade tensions between Washington and Beijing is another challenge for suppliers, Chen said. "While looking beyond PCs and smartphones, the companies have to also dodge potential damage from the trade issues."