TOKYO -- Even before the outbreak of the coronavirus in China, 2019 was shaping up to be a tough year for Art Basel Hong Kong.

Three galleries have pulled out of the March 19-21 show and, with political unrest roiling the city, other galleries have also voiced reservations about participating in the event.

Now, concern is growing that the new virus, which had killed over 100 people as of Tuesday afternoon, will keep visitors away. The months long protests in Hong Kong have already taken a toll on the city's luxury goods sector, and the new virus could deal another blow, especially if Chinese art collectors stay home.

An Art Basel spokesperson told the Nikkei Asian Review on Tuesday that the event organizer is "monitoring the developments closely" but that "it is too early for us to discuss how the recent outbreak of the new virus will impact the show."

The organizer was more optimistic that it can manage the fallout from the political situation.

"I think we have done everything we possibly can, to try to help the galleries have a better year," Adeline Ooi, director for Asia of Art Basel, told Nikkei in a recent interview in Tokyo. The organizer is offering a range of incentives for this year's show, including discounts on booths and lower withdrawal fees.

While she acknowledged that the city's art scene has been affected by the continued unrest, "90% of our galleries are already very supportive and proactive and are very much part of the show."

Ooi said VIP registration from mainland China and across Asia had been "very positive" so far, adding that the organizers are "generally cautiously optimistic" looking at ticket sales. "Within the scope of art, I think it is very clear that we all believe in supporting each other."

But Ooi also confirmed three galleries out of 244 have pulled out from the fair, including Tokyo-based SCAI the Bathhouse. "We are now busy with three other exhibitions," the gallery told Nikkei, but declined to comment further. The organizers say these three galleries are being replaced by wait-listed galleries. 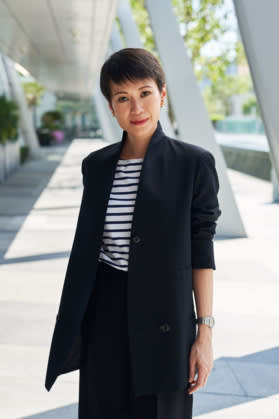 "I think we have done everything we possibly can, to try to help the galleries have a better year," said Adeline Ooi, director for Asia of Art Basel. (Photo courtesy of Art Basel)

"It is not a good year to hold this fair. ... Many people who normally attend the fair have indicated that they will not attend this year," said the letter from New York-based Paula Cooper Gallery, London-based Lisson Gallery and others, according to art market news site Artnet news. "Many of our artists are unwilling to have their work shown at the fair" because participation in a territory under threat of increased Chinese control is not "consistent with their core belief in the freedom of expression." The galleries demanded a 50% reduction in booth fees among other requests.

In an email response to the letter seen by Nikkei, Ooi and Spiegler agreed to extend the due date for payments, in addition to offering galleries insurance available on the market and the option of reducing their booth size to cut costs. They declined to slash booth fees by 50%, however.

With galleries desperate to crack the Chinese market, the current situation leaves many facing a tough choice.

"I think it's in really bad taste [to hold] the fair in the current situation, to sell artwork (and in many cases "political" artwork) inside the fair while students are literally being shot on the street outside for demonstrating for universal suffrage," said an artist who has previously exhibited at Art Basel.

Many galleries may feel it is "very problematic" to participate but are afraid to cancel for various reasons, including the direct financial loss and fear of being blacklisted by Chinese collectors or "shadow banned" by the Art Basel committee and losing their spot in the next show in Basel or Miami, the artist added.

"This is an unusual dilemma for the galleries," as they would cancel at any other fair location, pointed out Wendy Goldsmith from London-based Goldsmith Art Advisory. But Art Basel is "their one opportunity a year to tap in to the lucrative cream of the Asian market."

She added, however, that the spread of the new coronavirus is giving potential exhibitors another reason to think twice. "It is no longer about political unrest and the 'optics,' but the question of the new coronavirus. Nearly five people I know travelling to the fair have canceled, for their own health, in the likelihood that their clients will cancel as well," she said.

The organizers of the fair are now "under a lot of pressure," she added, but the cancellation of the event is unlikely unless the circumstances are covered by insurance.

Visitors from mainland China have been declining since the outbreak of massive protests in June 2019. According to the Hong Kong Tourism Board, the number of visitor arrivals from mainland to the city in November was 1.92 million people, down 58% from Nov. 2018. This is potentially bad news for Art Basel Hong Kong, as China is one of the biggest sources of visitors to the fair, along with South Korea and the U.S.

A disappointing event in Hong Kong would add to the headaches at MCH Group, Art Basel's parent company.

MCH is in the middle of restructuring due to financial difficulties. The company reported a net loss of 700,000 Swiss francs ($720,000) for the first half of 2019, following two years of annual net losses, due in part to the burden of owning various venues. It tapped Art Basel's global director Spiegler to take charge of MCH's entire product and service portfolio from Jan. 1 and announced it would focus on running its own events -- including the art fair -- rather than marketing events for others.

MCH will hold an extraordinary general meeting on Wednesday at the request of Affiliated Managers Group, an investment management company, which argues MCH should sell Art Basel and other trade fairs and focus on its marketing business. The MCH board opposes that suggestion.

While Art Basel faces uncertainty, there are signs of resilience in Hong Kong's art market. A work by the Japanese artist Yoshitomo Nara sold for nearly $25 million at Sotheby's contemporary evening sale in the city in October, making a new record.

And the three-day fair has not lost its appeal for everyone.

"Exhibiting at Art Basel Hong Kong would give a high status for young and mid-scale galleries like us," said an Asian gallery operator participating in the show this year. While she acknowledges sales may not perform well this year, "Art Basel provides us with enormous credibility for artists. We don't want to miss this chance."

At last year's Art Basel Hong Kong, 242 galleries from around the world were represented, with more than half from Asia. Visitors hit 88,000, up 10% from the year before. UBS is the event's lead sponsor.