As cyberattacks mushroom, so too do cyberinsurance policies

Major Japanese insurers say segment has grown 250% in a year

A screenshot of WannaCry ransomware   © Reuters

TOKYO -- Corporate Japan is waking up to the danger of cyberattacks, with more companies taking out insurance policies specifically designed to cover digital damage.

According to the Nikkei survey of major Japanese insurers in the nonlife market, their cyberinsurance policies have increased 250% over the past 12 months, surpassing 1,000, as of the end of March.

Such policies protect companies from liability when online thieves steal customer data and other information. They also cover the costs of service suspensions, investigations and restoring damaged computer systems.

The coverage is coming in handy. One Japanese tech company was forced to temporarily halt its services after its website was altered in a cyberattack. The shutdown dented sales, and the company was obliged to pay professionals to restore the site. But insurance covered more than 5 million yen ($44,000) of the costs. 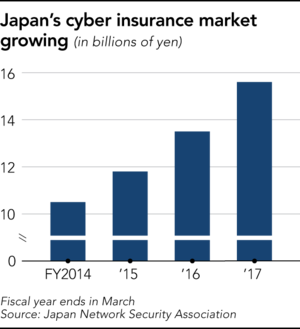 Another company's online shopping site was breached, compromising data on tens of thousands of customers, including credit card details. The company received an insurance payout of more than 10 million yen to help with the investigation, the cost of setting up a call center to field inquiries from worried users, and legal fees.

Annual premium payments range from several hundred thousand to several million yen, depending on the company's sales and line of business. One insurer estimates that a hypothetical cyberattack resulting in the theft of data on 100,000 customers can saddle a company with 180 million yen worth of damage.

Corporate Japan's safety net still has some gaping holes. Tokio Marine & Nichido Fire Insurance surveyed 1,144 security system administrators and found that more than 60% of companies had experienced computer virus infections and targeted email attacks, up 150% from a year earlier. But only 10% of the companies had taken out cyberinsurance.

Japan's cyberinsurance market is expected to expand 16% this fiscal year, to 15.6 billion yen, according to the Japan Network Security Association, a Tokyo-based nonprofit organization.

Insurers are targeting not only large corporations but also smaller businesses that are hesitant to pay the premiums. Tokio Marine has partnered with Tokyo software developer TeamSpirit to provide cyberinsurance to small businesses, using TeamSpirit's cloud-based accounting services.

Mitsui Sumitomo Insurance has also launched a free advisory service for small businesses. The insurer sends out simulated targeted emails to company employees and offers advice based on how the recipients react.