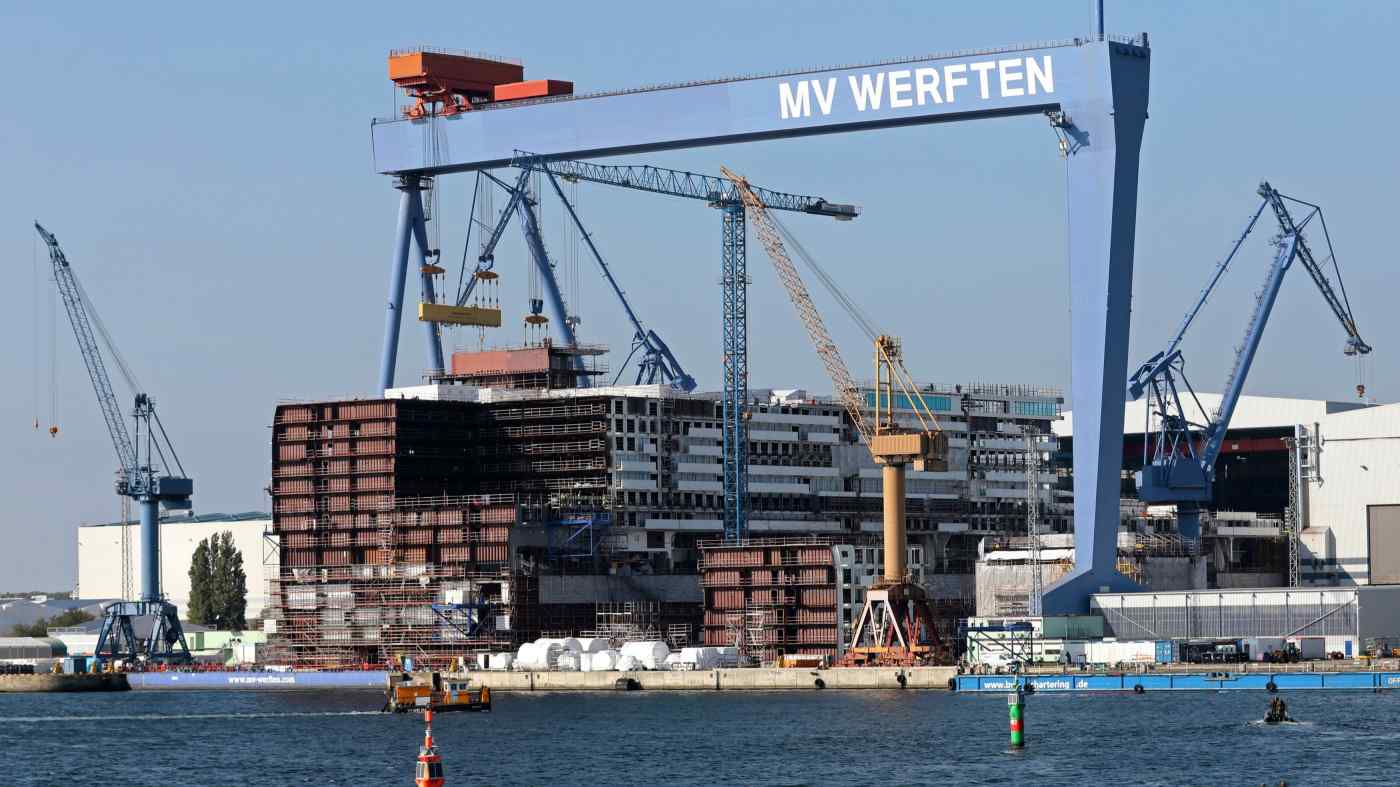 HAMBURG, Germany -- Genting Hong Kong, Asia's biggest cruise operator, is to get 193 million euros ($227 million) from Germany's government for its struggling shipyards in the country, despite reservations over state handouts to foreign investors.

The payment to the operator of the Star Cruises, Dream Cruises and Crystal Cruises lines will allow work at its shipyards in northeastern Germany, grouped under MV Werften, to carry on at least until March.

"We have clearly made headway. The federal government is bailing out MV Werften," said Harry Glawe, economic minister of Mecklenburg-West Pomerania, the state where MV Werften is located.

Genting had applied for 570 million euros from Germany's coronavirus stabilization fund -- the largest publicly known such request by a foreign company.

A decision on whether to grant Genting the full amount requested now depends on an assessment of the company's overall prospects.

The German government created the fund to try to preserve jobs through the pandemic. But payments to foreign companies such as Genting have proved contentious, reflecting a fear that taxpayer handouts to foreign investors would flow abroad rather than benefiting German workers.

Part of the original rationale for the fund was to make cash-strapped German companies less vulnerable to being bought out by Asian rivals.

"Decisions on state aid are particularly difficult when they involve foreign parent companies, as it is not easy to interfere with foreign parent companies' cash management to ensure that funds do not flow abroad," said Otto Fricke, a German parliamentarian of the opposition Free Democratic Party who serves on the Bundestag's budget committee, in an interview with Nikkei Asia.

"But Genting no doubt enjoys enormous leverage, given that we acknowledge the necessity of bringing its many highly qualified German workers as well as its massive local tech supply chain through the crisis," he added.

Genting bought MV Werften in 2016 at the height of a bcruise shipiseship building, but the sector has been among those worst hit by the coronavirus pandemic, darkening the prospects for MV Werften's 3,100 workers.

In August, Genting Hong Kong froze payments to creditors and said it was seeking a debt restructuring.

In terms of applications for Germany's coronavirus stabilization fund by foreign parent companies that have been publicized, Genting's exceeds the 500 million euros sought by both U.S.-based automaker Ford and British-U. S. owned cruise line AIDA Cruises.

German fashion company Tom Tailor received 100 million euros in the form of government loan guarantees in June before it was fully acquired by China's Fosun International.

Norbert Brackmann, the German government's maritime coordinator, has said in interviews that the government must closely look into whether Genting is temporarily cash-strapped because of the pandemic or suffering a structural problem.

Brackmann cautioned that Beijing's "Made in China 2025" strategy has elevated shipbuilding to a key sector, signaling that Genting may have to face fierce Chinese competition.

"We are not convinced that the financial problems of MV Werften are caused by [coronavirus]," said Nikolaus Kramer, AfD leader in the regional parliament. "There are other local shipbuilders that have been coping better with the crisis."

Germany's powerful metal union IG Metall, for its part, has been supportive but points out that the interim aid will only allow completion of one ship, the Crystal Endeavor, with the prospects for a second tranche remaining unclear.

MV Werften has been building three ships for Genting -- the Crystal Endeavor, which was due to be delivered this summer, as well as the Global Dream and the Global 2, due for completion in 2021 and 2022, respectively. In August, Genting warned that the deliveries would be delayed by about a year.

"Those discussions for a second tranche [of aid] will drag on for months during which Genting must make plausible how it intends to restructure," said Heiko Messerschmidt, an IG Metall officer for maritime economics.

Brian King, a professor of hotel and tourism management at the Hong Kong Polytechnic University, said state aid for MV Werften would align German government support with an industry sector that has proven growth prospects.

King pointed out that Genting's main customer base in Asia is rebounding. "While Genting HK is undoubtedly vulnerable in the current environment with international travel stalled, and dependent on a progressive relaxation of travel restrictions, the prospects are fair," King said.

"The cons are that until the cruise industry rebounds, there may be a glut of vessels."